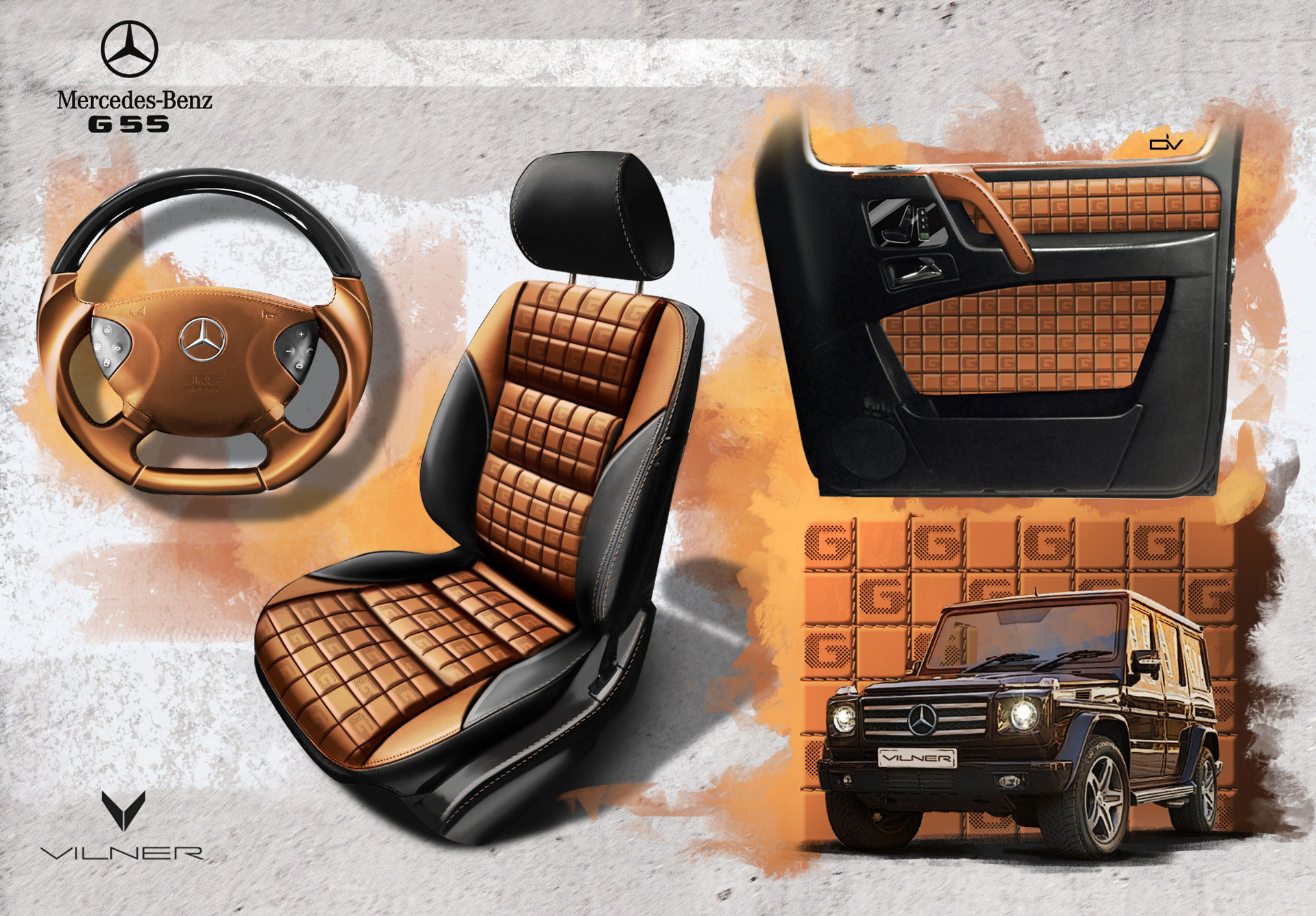 Overview
The vehicle for the Vilner conversion project was originally sourced from the UK and then shipped to Sofia where the studio’s designers are based. The owner of the G 55 AMG and instigator of the upgrade is a successful Bulgarian living in London. The brief: remake the interior and in doing so, get as close as possible to the opulence found within the new G 650 Maybach Landaulet.

As the client was a fan of the game of chess and enjoys “Ritter Sport” chocolate, a chess pattern with a perforated letter “G” was requested. Vilner expressed these two lines of personal taste with ergonomically upholstered cube shaped segments. A fine Soft Cocoa Brown-Orange leather covers most of the interior with the exception of some black areas like the seat’s sides. 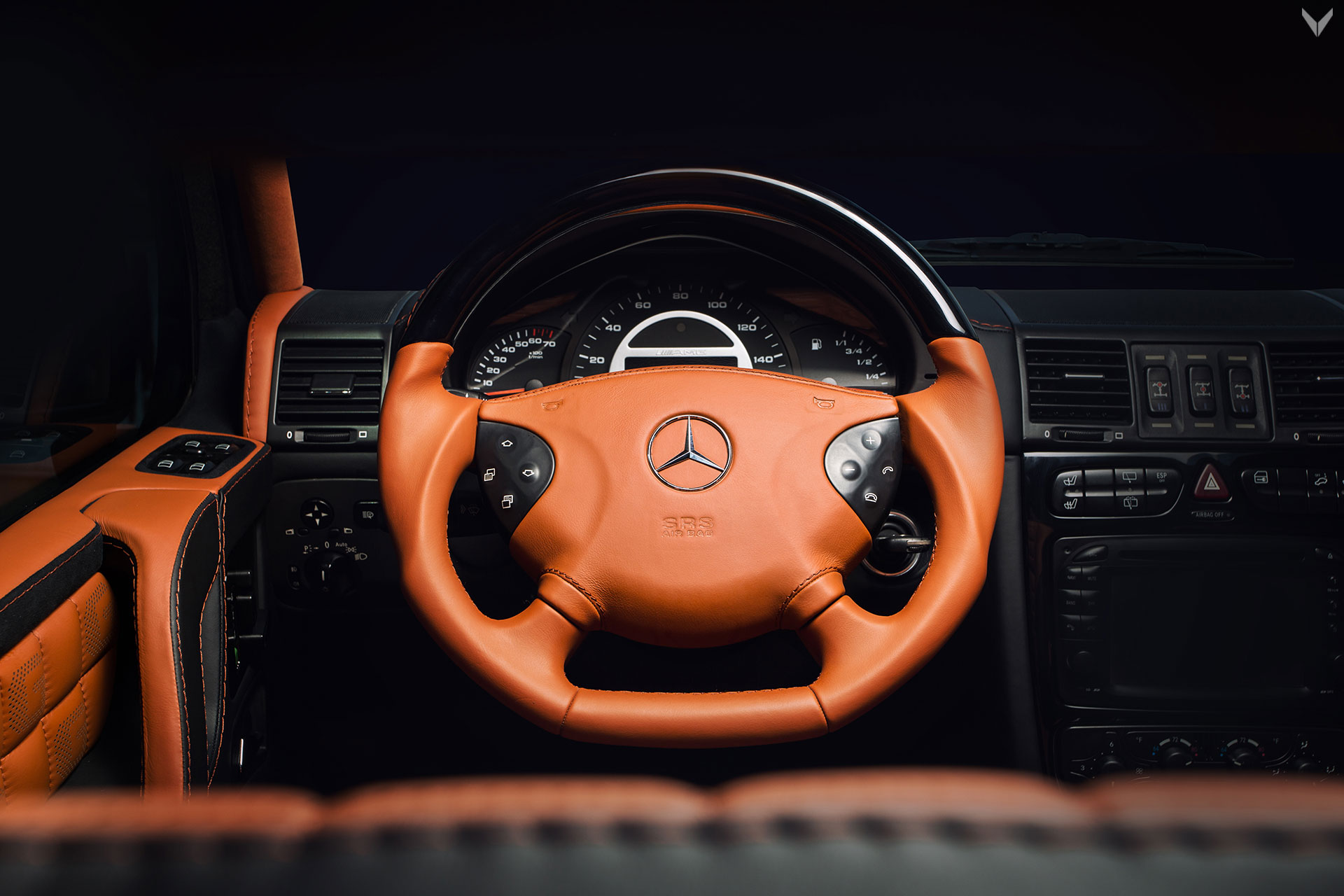 The steering wheel was thoroughly reworked and combined an ergonomically shaped ring with black piano lacquer for the top and a fine leather for the rest of the wheel, including the middle airbag section. That same black piano lacquer was also the finish of choice for all of the G-Class interior trim pieces. The dash was wrapped in black leather providing a nice contrast with that Soft Cocoa Brown-Orange colour. 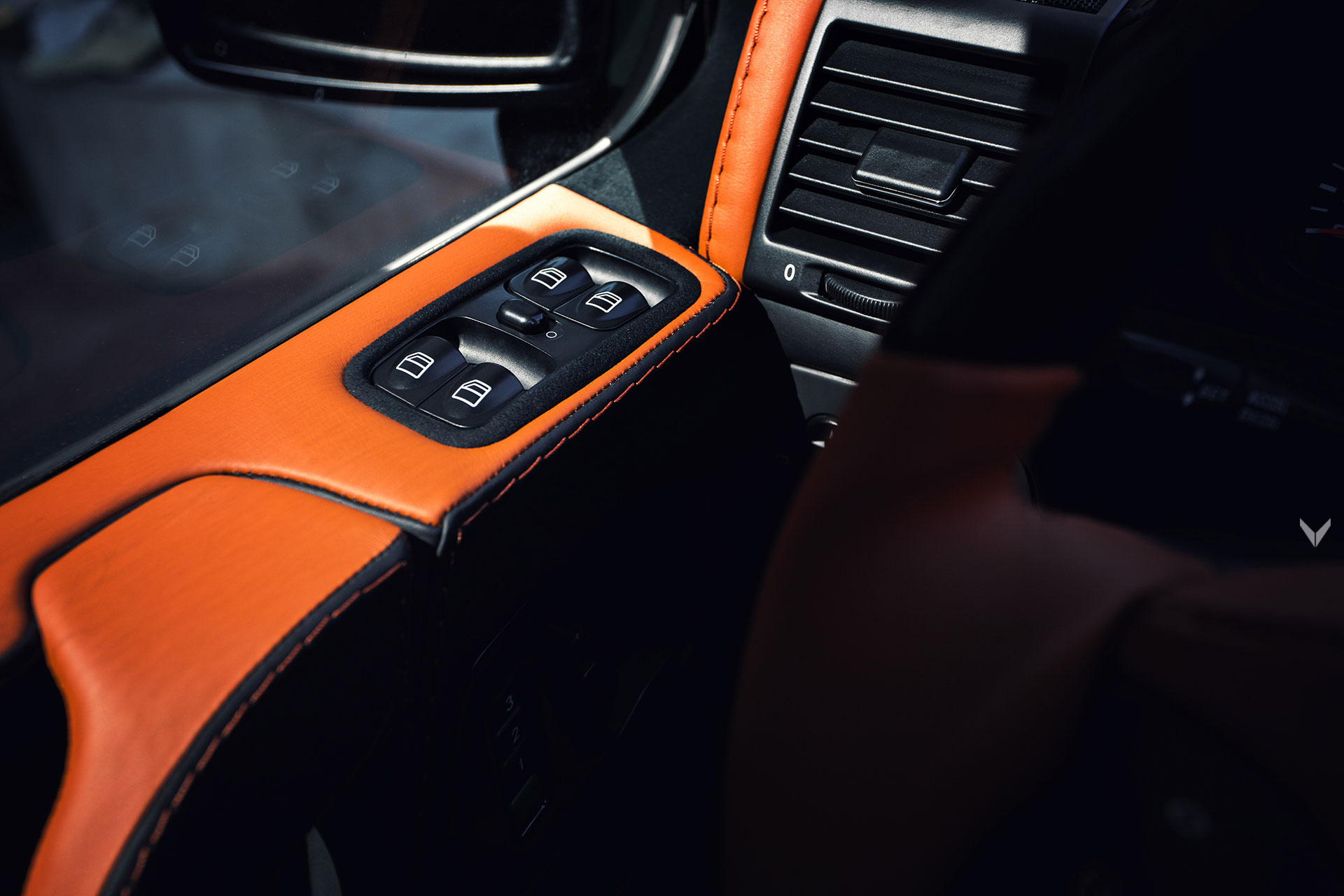 The majority of the surfaces were converted to soft touch padded leather and extra sound-proofing was installed in key areas of the G 55’s body to bring the car closer to the ambience found within the Maybach. 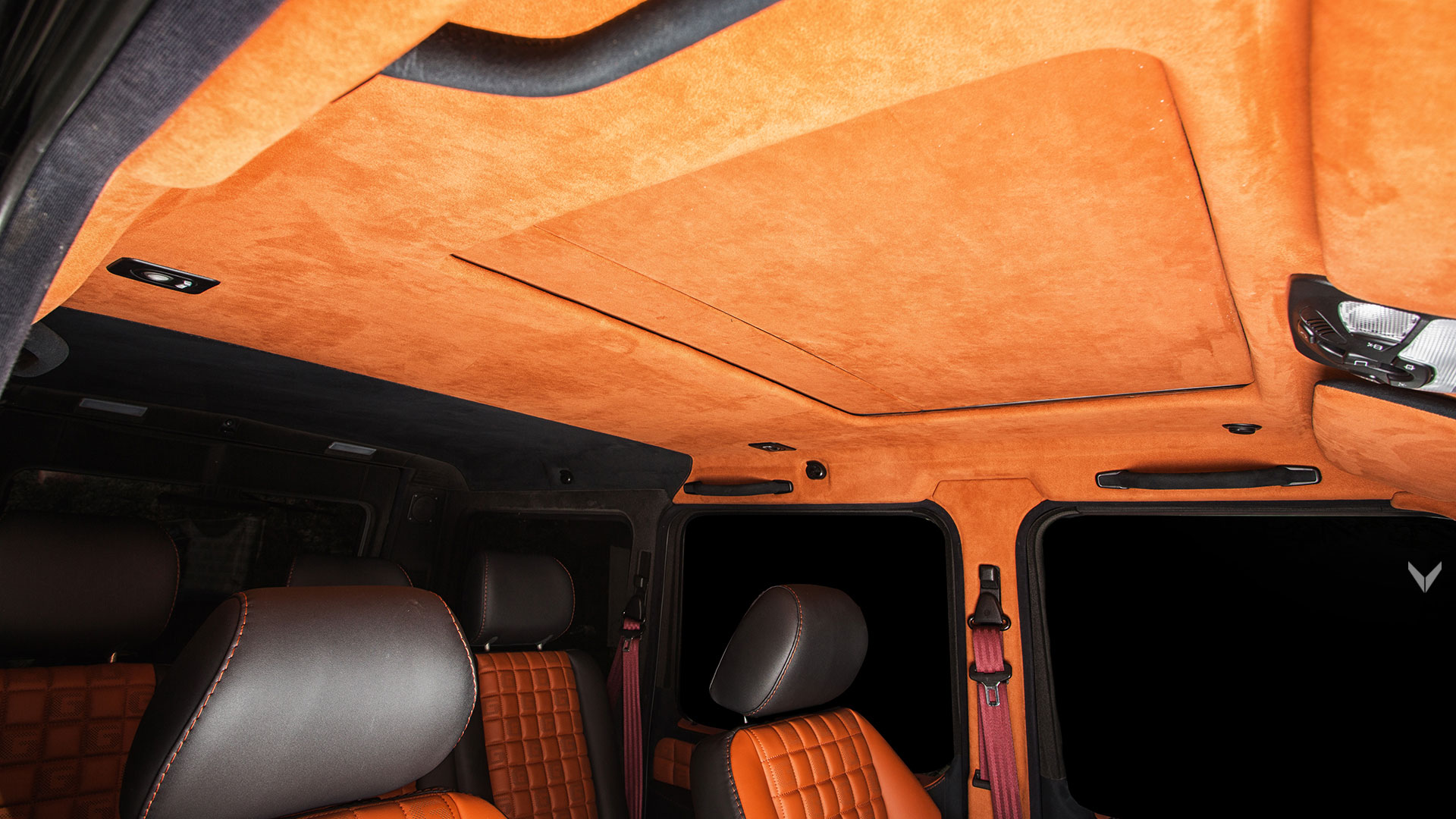 Soft padding was also used under the car’s Alcantara roof liner. Soft Cocoa Brown-Orange for the front section and black for the rear part that sits above the luggage area.

This particular colour combination was also found to be useful in improving the vehicle’s rear visibility due to the darker area around the rear-view glass.

The sun visors were wrapped in both black and Soft Cocoa Brown-Orange Alcantara. Finally, a matte black wrap was applied to the exterior with Vilner’s chrome signature. 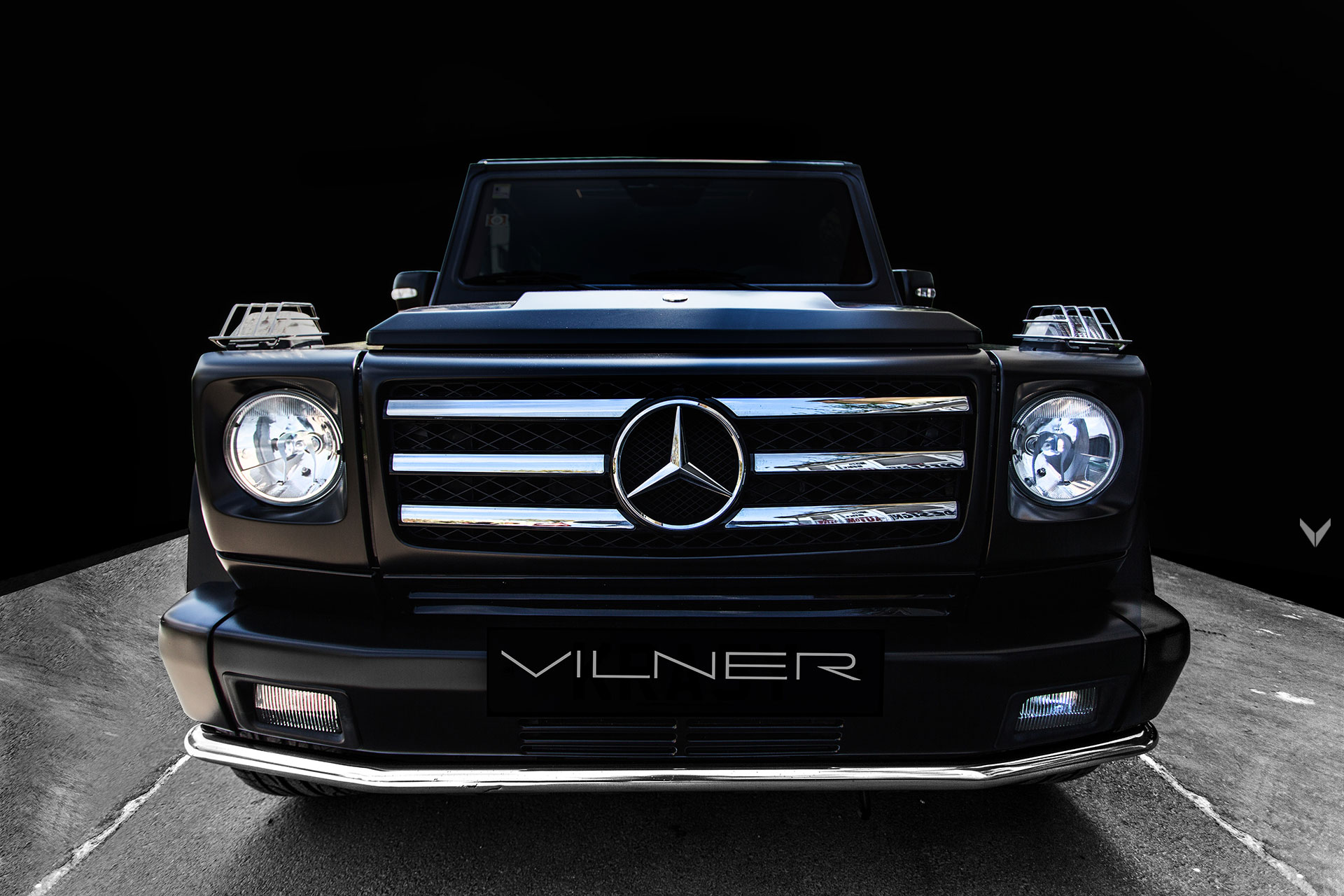 Summary
Visually, the upgraded interior of the G 55 AMG is eye-catching. We don’t have an indication of what the cost of the Vilner conversion was and without driving both this G 55 conversion and the Landaulet can’t comment on whether the desired result was achieved audibly. However, this is once again, a good example of what the Bulgarian design house is capable of and if you can’t quite stretch to the estimated $550,000 Maybach Landaulet price tag, buy a used G 55 AMG and ship it to Bulgaria.