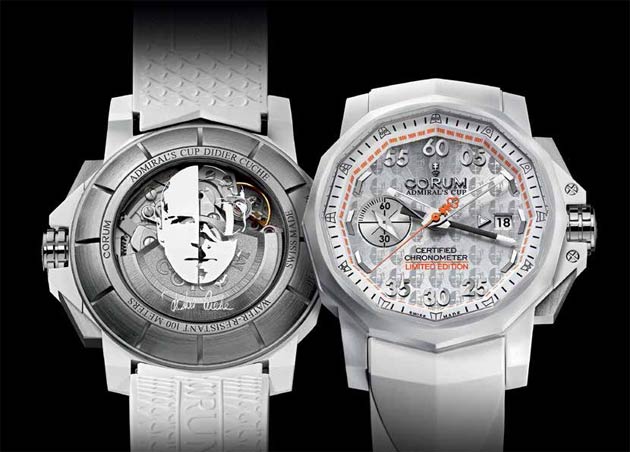 Charismatic brand ambassador Didier Cuche – the ski champion who has now retired from competition – presents a new ladies’ watch bearing his effigy. It takes its place alongside the existing men’s model in his mini-collection.

Control, concentration, performance, a quest for perfection and an unmistakably Swiss identity are some of the shared values cementing the partnership between Didier Cuche and Corum. Even though the ski legend officially retired from the “White Circus” competition circuit at the end of the 2011-2012 season, his cooperation with the brand from La Chaux-de-Fonds continues and is indeed more dynamic than ever. 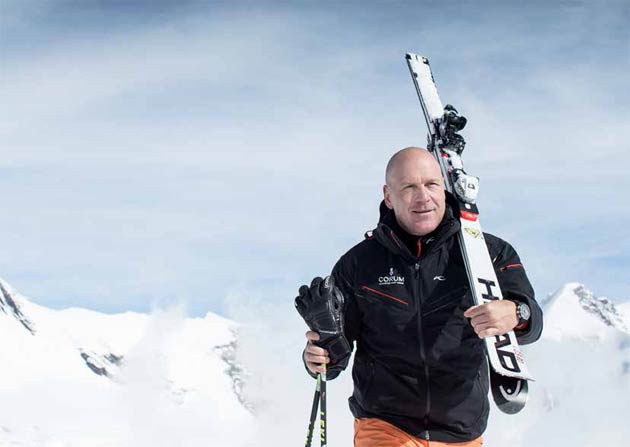 Witness the new Admiral’s Cup 44 Chrono Centro Didier Cuche for ladies that now enriches the mini-collection bearing the sportsman’s effigy – a line that already features a men’s model that comes with a choice of two different dials. Which horological complication could better pay tribute to one of the greatest skiers of all time than Corum’s iconic Admiral’s Cup chronograph with its twelvesided case? 21 wins, 67 podium finishes, 6 World Cup crystal globes, a record number of Kitzbühel downhill victories: the impressive track record achieved by Didier Cuche reflects his intensely physical tussle with time. 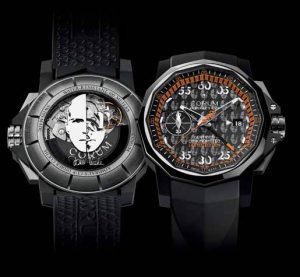 This vocation, this rare calling to excel, combined with an unfailing sense of fair play and deep-felt respect for fellow competitors, propelled him to the rank of Swiss of the Year in 2011 and Swiss Sportsman of the Year in 2009 and 2011.

This distinctive personality, born just a few kilometers from La Chaux-de-Fonds – which is home to Corum – deserved more than just one dedicated timepiece. Didier Cuche is thus delighted to be presenting a series of three models. The latest, issued in a 20-piece limited edition, is intended for his most fervent female fans. The resolutely sporty Admiral’s Cup 44 Chrono Centro Didier Cuche for women features a 44 mm-diameter case in white vulcanized rubber. The matching white rubber strap is fitted with a triple folding clasp, while the silvery grey dial is carpeted with a tone-on-tone transfer depicting the stylized face of Didier Cuche. Only a few orange accents – on the seconds hand, the minute circle appearing around the inner bezel ring and the “Limited Edition” inscription – spice up the perfectly balanced visual harmony.

This exceptional, elegant and sporting model takes its place alongside the two previously presented men’s versions: the first with a black dial and the second in an anthracite shade. Like the latest introduction, these timepieces are all equipped with a mechanical automatic C0960 movement, chronometer-certified by the COSC. Visible through a transparent case-back adorned with a metallized version of Didier’s face logo and signature, this caliber powers indications of the hours, minutes, small seconds at 9 o’clock, a date displayed through a window and a central chronograph seconds hand. The latter is joined in the centre by a hand counting off the minutes, contrary to usual practice that involves displaying the minutes in a dedicated subdial or counter. This choice results in clearly enhanced readability.