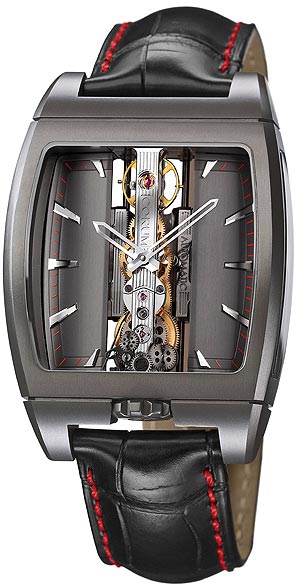 About Corum
The adventure began with René Bannwart. With his strong entrepreneurial spirit and watchmaking experience acquired from the most prestigious watch manufacturers, he founded his own brand and created CORUM in 1955 with his uncle Gaston Ries. Particularly fascinated by the word “quorum” which means the minimum number of persons present and necessary to hold discussions and make valid decisions, however René Bannwart simplified the spelling to CORUM. Right from the time of its creation in 1955 in La Chaux-de-Fonds, CORUM displayed a determination to position itself at the forefront of the Swiss watch industry. The emblem, a key pointing skywards, is a symbol of the mystery to be fathomed, the enigma to be resolved, of new territories to be explored, and of innovation. It also alludes to the inventiveness, tenacity and bold spirit required in order to attain the total mastery of time. In 1956 the first CORUM watches appeared on the market and the brand launched a veritable cascade of new ideas with great success. It was even recognized by its peers as one of the most creative in the industry. In 1966 Jean-René Bannwart, the son of the founding father, joined the watchmaking company. He created the models which became Corum’s trademark, in particular the Admiral’s Cup model.