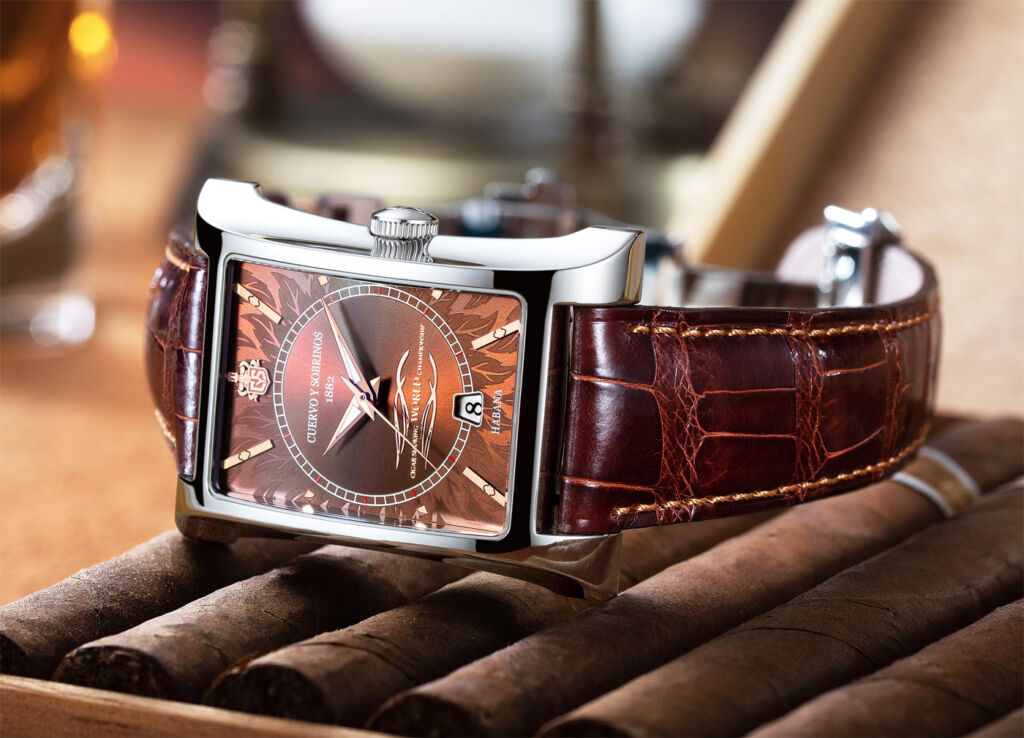 Cuervo y Sobrinos will once again be the official timekeeper of the Cigar Smoking World Championship and celebrates by introducing some new timepieces under the guise of the Esplendidos CSWC Special Edition Range.

It’s hard to deny that as far as partnerships go, Cuervo y Sobrinos and the Cigar Smoking World Championship (CSWC) is a match made in heaven. You see, it’s in their DNA, Havana has been the spiritual home of Cuervo y Sobrinos since 1882. Then you have the Cuban capital itself, a place synonymous with the manufacture of fine cigars.

It was back in 2015 when Cuervo y Sobrinos became the official timekeeper at the CSWC for the first time. Over the past decade, the championship has been held in locations all over the world, including the Amalfi Coast, St. Petersburg, New York and Paris. The final always taking place in Split (Croatia) at the end of August.

This year is the 10th anniversary of the CSWC and once more plays host to both male and female contestants who share a common love for fine cigars. Participants in the event slowly smoke a cigar, savouring its many qualities. The winner is the last person to finish smoking their competition cigar.

The event as created by cigar expert Marko Bilic and as it is a special anniversary, Cuervo y Sobrinos is launching three special editions of its Esplendidos Collection. 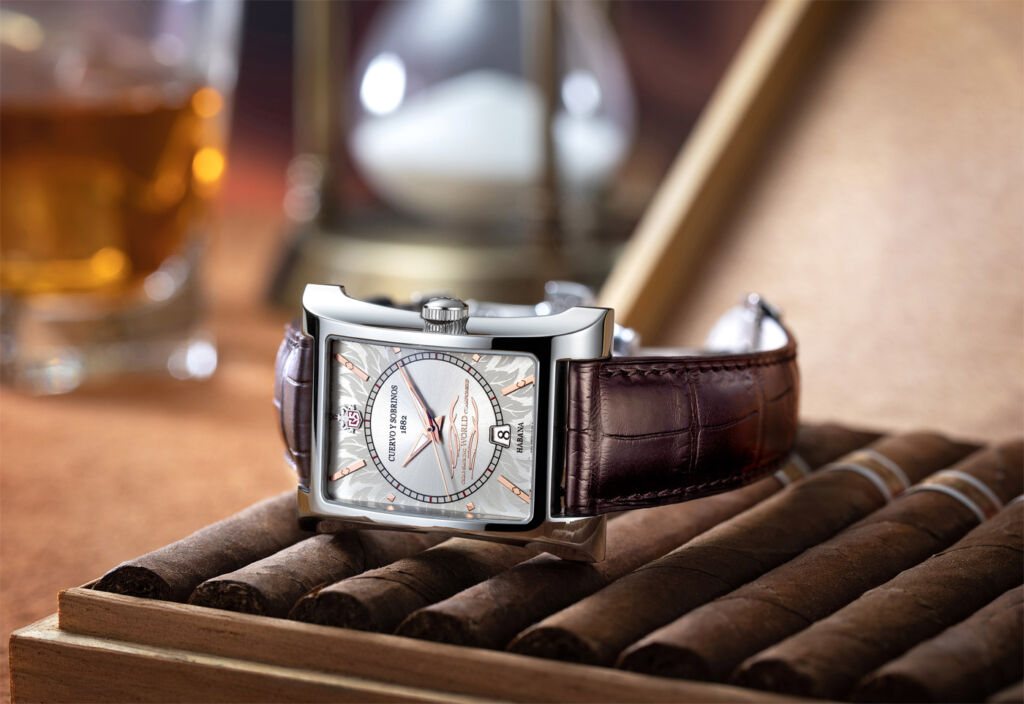 How to determine the winner of the Cigar Smoking World Championship
Winston Churchill once said “Smoking cigars is like falling in love. First, you are attracted by its shape; you stay for its flavour and you must remember never, never to let the flame go out”. This could be said about the CSWC, a genuine international competition whose goal is to smoke a cigar for the longest period of time.

There are a few rules and regulations to follow.
Each participant gets to choose a cigar from the same box with a cutter and two long matches. Participants have a maximum of one minute to light up and you cannot relight during the competition. You are not permitted to blow on the embers, blow through or wet the cigar and during the first five minutes, you are not allowed to talk or consume drinks. The cigar must be kept in the hand at all times and never be put down throughout the competition.

If the ash falls in the first ten minutes, twenty minutes will be deducted from the final time. In the first twenty minutes, it’s fifteen minutes and for the first twenty-five minutes, ten minutes will be deducted. If the smoker manages to hold out for forty minutes he is able to tap off the ash with no penalties. The winner is the person who manages to play the clock and smoke his cigar for the longest without relighting. This takes into consideration all penalty minutes, if applicable.

About the Cuervo y Sobrinos Esplendidos CSWC Special Edition Range
The Esplendidos is a historical design which perfectly reflects the spirit of the Cuervo y Sobrinos brand. The timepieces are inspired by the Art Deco style, combining a fantastic heritage with timeless classicism with its typical 1950’s design. It reflects the true character and identity of the brand.

The CSWC Series is a collection of fine watches, incorporating exquisite details, crafted for individuals who appreciate the finer things in life and prefer to take the time to savour their inherent qualities. 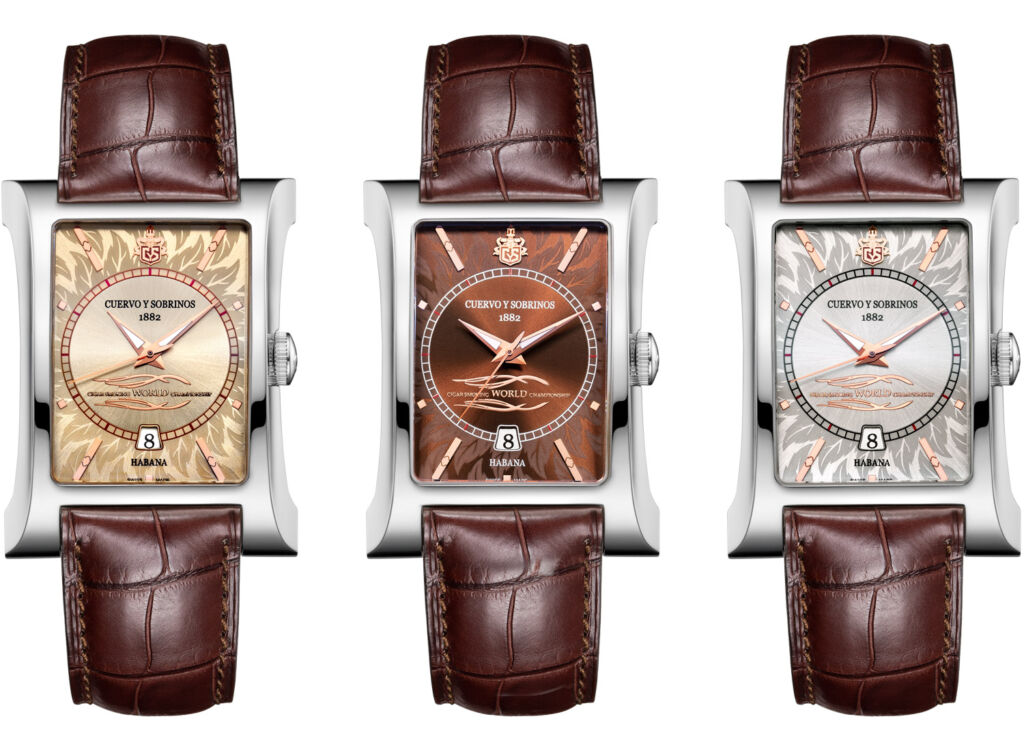 The specific versions in the Esplendidos CSWC special edition range
The watches come in three versions. One version for the World Champion – the winner at the Grand Final in Split (30.August.2019): this watch is a unique piece with a cream/champagne. The second, with a very elegant silver dial, is for the winner of the main international qualifying (one country, one winner). And lastly Cuervo y Sobrinos has created a Limited Edition for cigar aficionados with a typical tobacco dial colour: an exclusive edition of only 80 pieces that is available at all CSWS events worldwide (the Esplendidos CSWC can also be ordered directly at the Cuervo y Sobrinos factory in Le Noirmont, Swiss Jura and is also available without the CSWC logo).

The range mirrors the competition spirit and presents following unique features: a background that reproduces the typical tobacco leaf design, the dial applied indices are shaped like cigars and the CSWS logo can be seen at the bottom of the dial. On top, the case back of the Esplendidos has a charming art deco engraving that is inspired by the interior of the original safe of the Cuervo y Sobrinos boutique in 1882. This safe can be seen in our Museum-boutique that is located in the heart of La Havana. Lastly, but not least, each timepiece comes in a beautiful humidor just to underline Cuervo’s intense commitment to the cause of joie de vivre, hedonism and quality!

The first Esplendidos CSWC will be unveiled during the World Champion final in Split (Croatia) at the end of August 2019. The World Champion will be the first to wear this unique model. The first 20 pieces of the Limited Edition with tobacco dial will also be available at the final for all participants and cigars aficionados.

Cuervo y Sobrinos – Where and how?