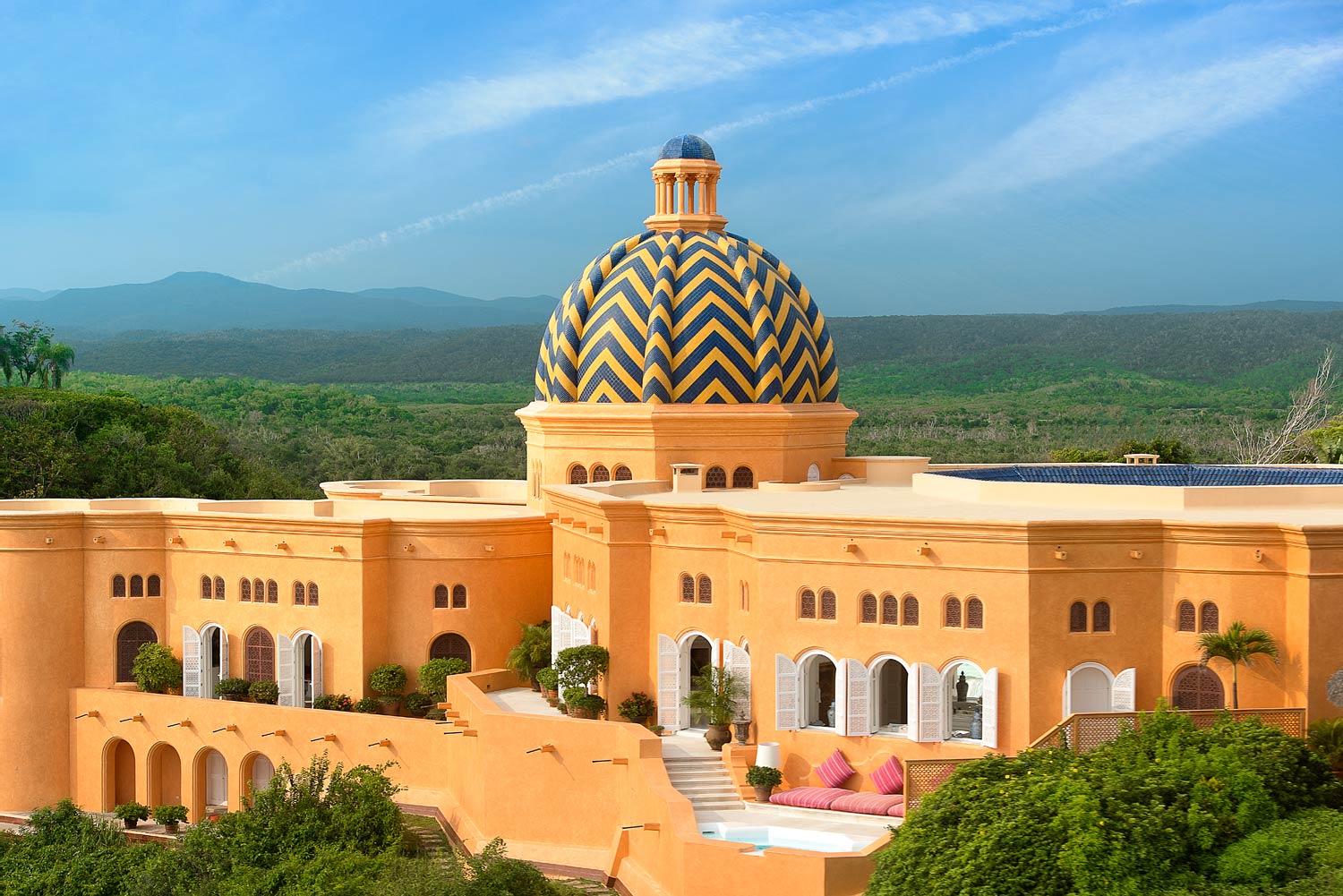 The first view of Casa Cuixmala can be startling. An exotic palace rising from the jungle in a remote part of the Mexican Pacific.

Surrounded by crocodile lagoons and with herds of zebras roaming on the plains it seems like it might be the hidden headquarters of a villain in a James Bond novel. The oceanfront palace was in fact designed by Robert Couturier (Rizzoli just published a book on his work: Designing Paradise) in an exuberant style that mixes the feel of Morocco, India and Mexico with soaring ceilings and fountain courtyards. It was built for the international financier Sir James Goldsmith who created not only this oceanfront palace but also a 25,000 acre eco reserve along with organic farms and ranches that made his jungle kingdom self sufficient.

In Sir James’ time Casa Cuixmala hosted Presidents and Prime Ministers from around the world. Under the ownership of his daughter, Alix Marcaccini, it was originally made available as the ultimate villa rental attracting guests like Mick Jagger, Madonna, George Lucas, Tom Cruise and even Bill Gates.

Still owned by Alix and her family, Casa Cuixmala has now been transformed into an ultra luxury 12 suite boutique hotel. The suites are either in private bungalows nestled in lush tropical gardens or within the palace itself. Expansive living areas open to panoramic views of the Pacific. Huge palapas provide outdoor areas for dining and relaxing in the area’s perfect climate. A grand staircase descends to a beautiful tiled pool on the wide white sandy beach.

Casa Cuixmala sits on over two miles of private beach and is surrounded by thousands of acres of nature reserve which besides the local flora and fauna boasts herds of zebra and antelopes. A network of trails for horseback riding, hiking and mountain biking give guests a chance to experience the unspoiled environment first hand. Guests may also participate in Cuixmala’s turtle protection program, one of the most successful in the world. Baby turtles are released to the sea at night when they have their best chance of survival and guests can help the biologists perform this very rewarding task.

Meanwhile Caleta Blanca, the white sand beach on a calm picturesque bay, is ideal for paddle boarding, snorkeling, ocean kayaking or just lounging on a hammock in the shade of the towering palm trees.

Casa Cuixmala also offers world class dining, serving a sophisticated organic cuisine entirely sourced from their own organic farms and ranch. Fruits and vegetables harvested in the morning are served the same day, the ultimate in farm to table. Its not just the food that is memorable at Casa Cuixmala but also the settings. The main restaurant offers panoramic views of the beach, ocean, lagoons, coconut plantation and mountains. Dinner is often served on the beach, surrounded by hundreds of candles and with a bonfire nearby. Stars twinkle overhead to the sound of breaking waves. Heaven.

While Casa Cuixmala now functions as a small luxury hotel it has never lost the ambiance of when it was rarefied private estate with highly personalized service reminiscent of another era.

Casa Cuixmala is located on the west coast of Mexico about 2 1/2 hours south of Puerto Vallarta and 1 hour north of Manzanillo by car but it also has its own grass landing strip. Suites range from $1,175 to $3,225 during the winter season.

See more of Casa Cuixmala below: