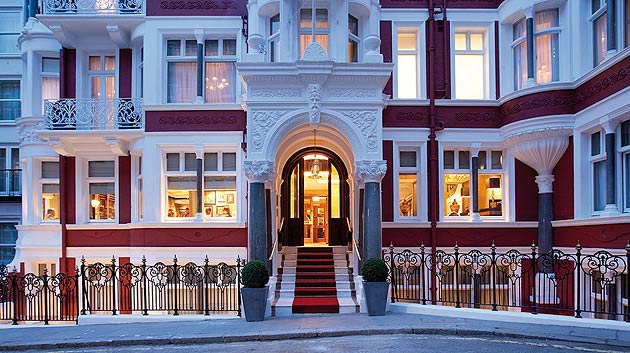 Just as he presented our final dish of the evening, our host spoke the words: ‘life is always full of little surprises’, a phrase which could not have summed up our experience more beautifully at the ‘Seven Park Place’ restaurant by William Drabble.

Tucked away on Park Place behind the busy thoroughfare of London’s Piccadilly, this eatery of the five-star boutique St James Hotel and Club was officially re-launched in September 2009. After just over a year, ‘Seven Park Place’ and Executive Chef, William Drabble, who has worked in some of England’s most influential hotels and restaurants, were awarded four AA rosettes and a prestigious Michelin star, a feat which was repeated for the third time two months ago. 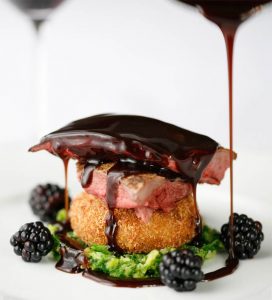 Housing only nine tables and 26 covers, ‘Seven Park Place’ presents an intimate dining experience surrounded by décor chosen by Drabble himself to reflect his love of modern French-style food made using the best British seasonal produce.

In addition to being highly acclaimed, what was different here at ‘Seven Park Place’, is that the meal which we were about to embark on was neither processional, nor predictable. Even if you could remember what you had ordered, every course, whether large or small, was explained in detail as it was placed before you. However, these were the only details which were to be revealed throughout the evening. The first surprise: an amuse bouche of frog’s legs. Although this was not to our preference, this did not matter, because behind the scenes, and without us even asking, our host had taken the initiative and effort to inform the Chef of our ‘decision’ who, in turn, created an alternative in the form of homemade carrot soup. This opening dish simply oozed flavour which set the tone nicely for our starter of a fillet of red mullet, whose delicate flavours intertwined seamlessly with the finely cut fennel and warm blood orange vinaigrette.

Come the main course, and I was equally taken aback by the sumptuous textures of the roasted Brill which was set on a bed of baked endive, and rounded off by a creamy sauce of cepes which was nothing short of superb. My guest was also rightly waxing lyrical about their artistically-presented griddled fillet of Sea Bass with braised Jerusalem artichokes subtly dressed with parsley puree and red wine jus. As if this wasn’t enough, these dishes were paired perfectly by the restaurant’s Sommelier with a crisp 2011 Chateau de la Roulerie Anjou Blanc wine. 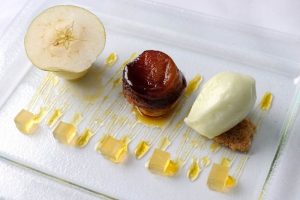 For dessert, the menu greets diners with a range of irresistible and indeed difficult choices which can each be joined by one of the restaurant’s personally recommended digestifs. Whilst there is milk chocolate mousse or Pina colada bavarois with poached pineapple, my heart was set on ‘An Assiette of Apple’. This translated as an array of apple-based sweets, neatly organised to form a tantalising sequence of carefully-crafted desserts spanning from a tarte tatin at one end of the platter to a bramley apple mousse at the other, a combination which worked flawlessly. My guest opted for the selection of British cheeses by Paxton & Whitfield (a business founded in 1797 and the official cheesemonger to HM Queen Victoria). These were intelligently arranged on a slate platter in order of strength, starting with the Aldwych goat’s cheese and culminating in Stilton, and were served with a medley of savoury biscuits.

Time for another surprise compliments of the Chef: caramelised banana with homemade banana ice cream, a dish which indeed left our palates feeling nicely refreshed. 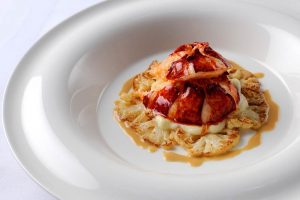 Just as we were starting to mull over what had been a truly enjoyable evening, our host arrived with one final offering and maybe the toughest decision of all: to choose from the selection of homemade confectionery (including dark chocolate and coffee or Baileys, and pistachio macaroons) and ‘melt-in-your mouth’ marshmellows. There was no wrong move to be made, but it was just a matter of how much room could be found to accommodate yet another sumptuous delicacy by Seven Park Place.

As well as being full of great twists, this was a meal that was immaculate in terms of presentation and delivery. Therefore, it was only apt that I was able to return my own compliments to Chef William Drabble in person, as this was a man who had, after all, created a masterpiece from start to finish. 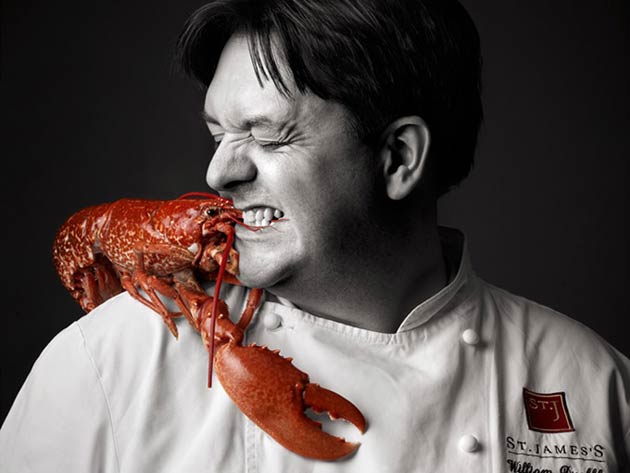