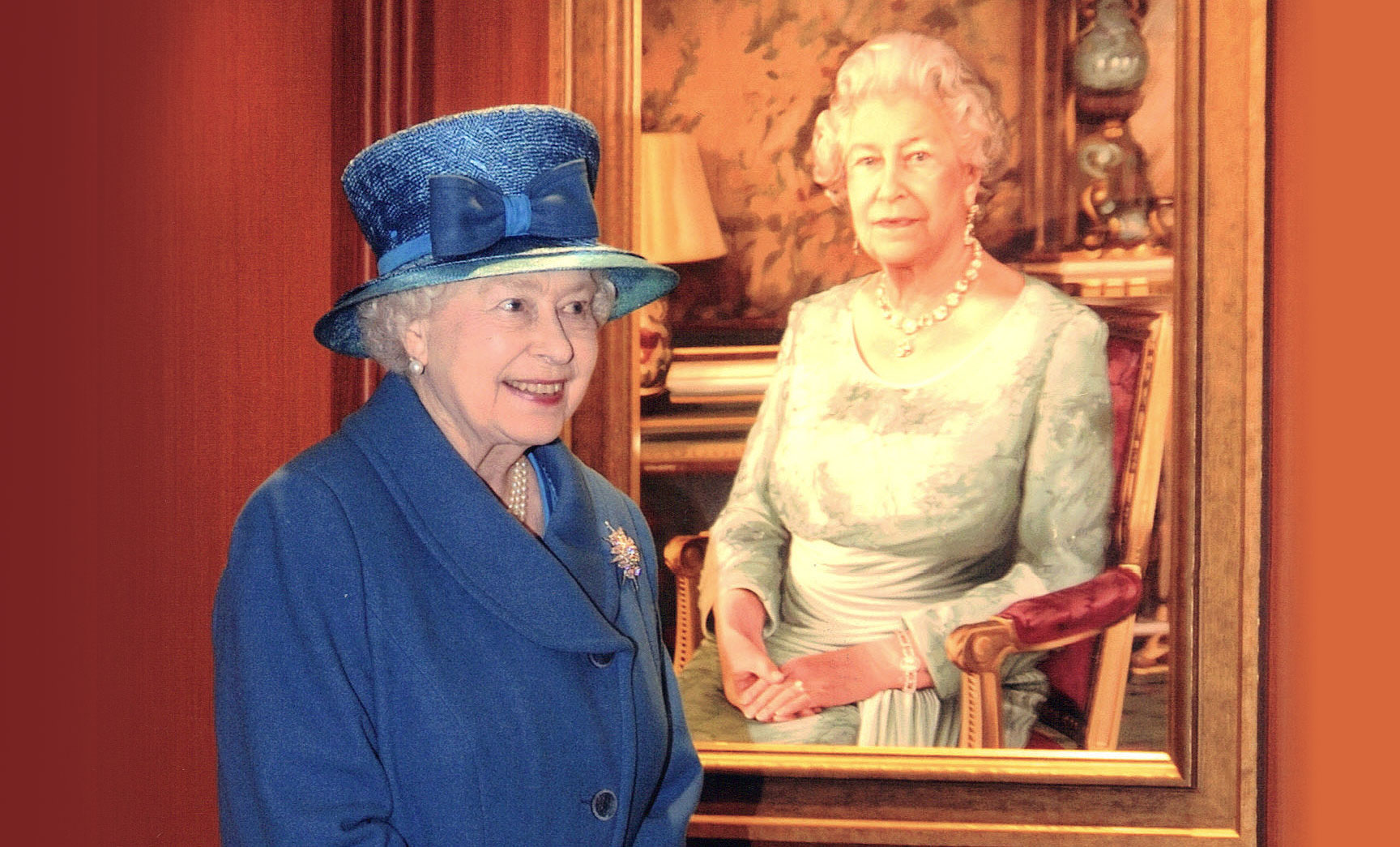 God bless The Queen, and all who sail in the ships named after her. That could easily be the motto of Cunard, the world’s most luxurious cruise line, whose own history is inextricably intertwined with that of The Queen of England as she celebrates her 90th birthday.

To mark the momentous occasion, Cunard is releasing previously unseen photographs of The Queen from its vast archives covering the 78 years of the monarch’s association with its world-class fleet.

The very personal relationship between Her Majesty and Cunard began in 1938 when the then Princess Elizabeth was only 12 years old and joined the Queen Mother for the launch of the Queen Elizabeth, the biggest liner in the world in her day.

Since then, she has either launched or named four Cunard ships, visited the Queen Elizabeth and the flagship QE2 numerous times, and reviewed them frequently from the splendid vantage-point of the Royal Yacht Britannia.

And she has the distinction of being the only person to be there at the launch of all three of Cunard’s Elizabeths in 1938, 1967 and 2010.

As a special tribute to Her Majesty, and courtesy of Cunard, Luxurious Magazine is publishing all of the Unseen Queen photographs here to mark her 90th birthday with notes from the Cunard archives. 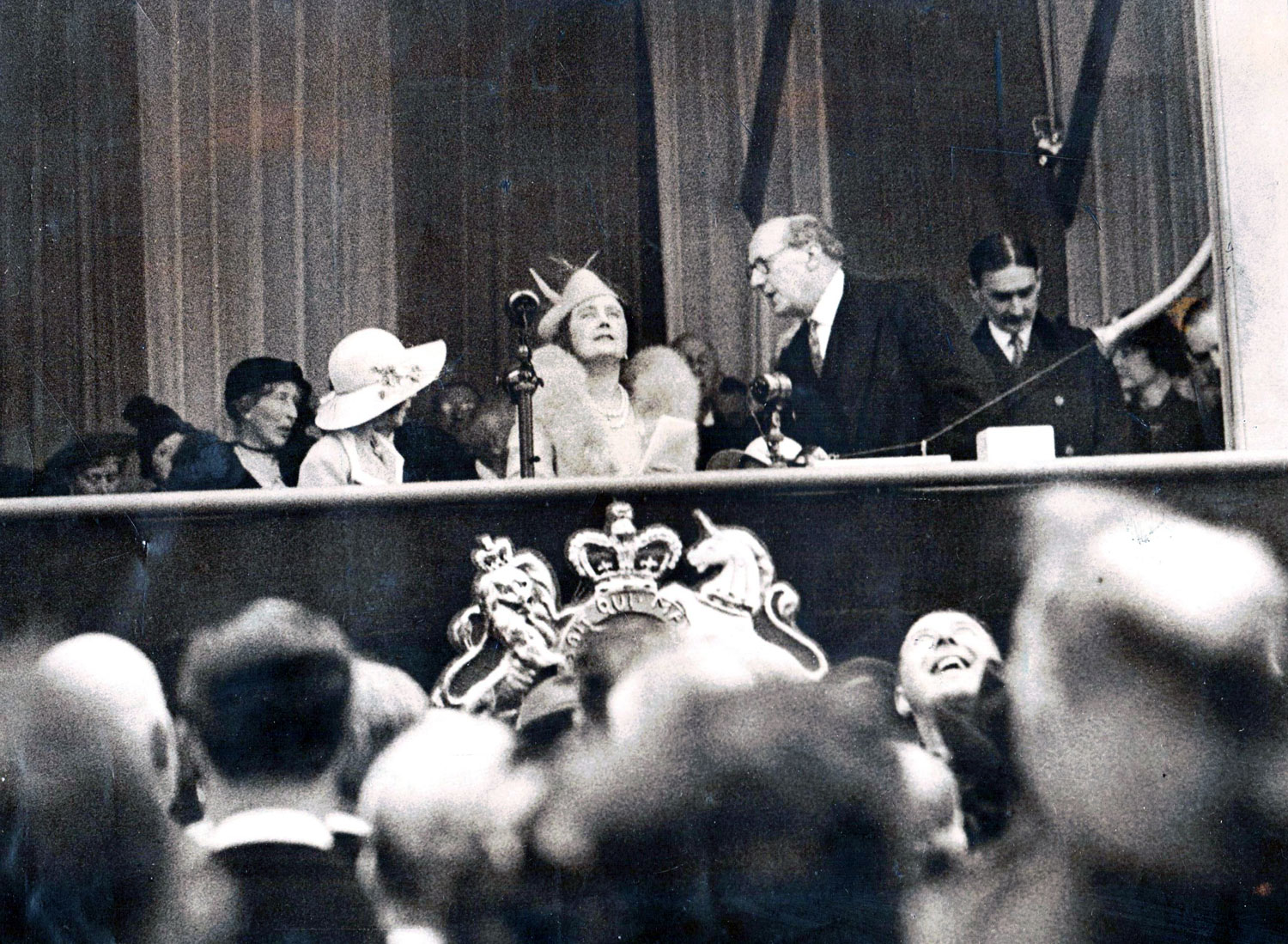 The King, George VI, was due to attend the launch with his wife (later known to generations as The Queen Mother), but Prime Minister Neville Chamberlain, concerned that war was looming, urged him to remain in London.

No-one outside immediate Royal circles had heard the voice of the Queen Mother before, so it was an historic occasion when it was broadcast over the airwaves as the young Princess Elizabeth watched.

Once the speeches subsided the crowd had to wait for the tide to be right, so the Queen Mother was presented with an album of photographs of the new liner at varying stages of construction.

However, the Queen Elizabeth herself was unwilling to wait and began to move slowly down the slipway.

The Queen Mother and the officials around her looked momentarily startled but, with the presence of mind for which she was famed, the monarch quickly released the bottle of wine and managed to break it against the hull just in time. 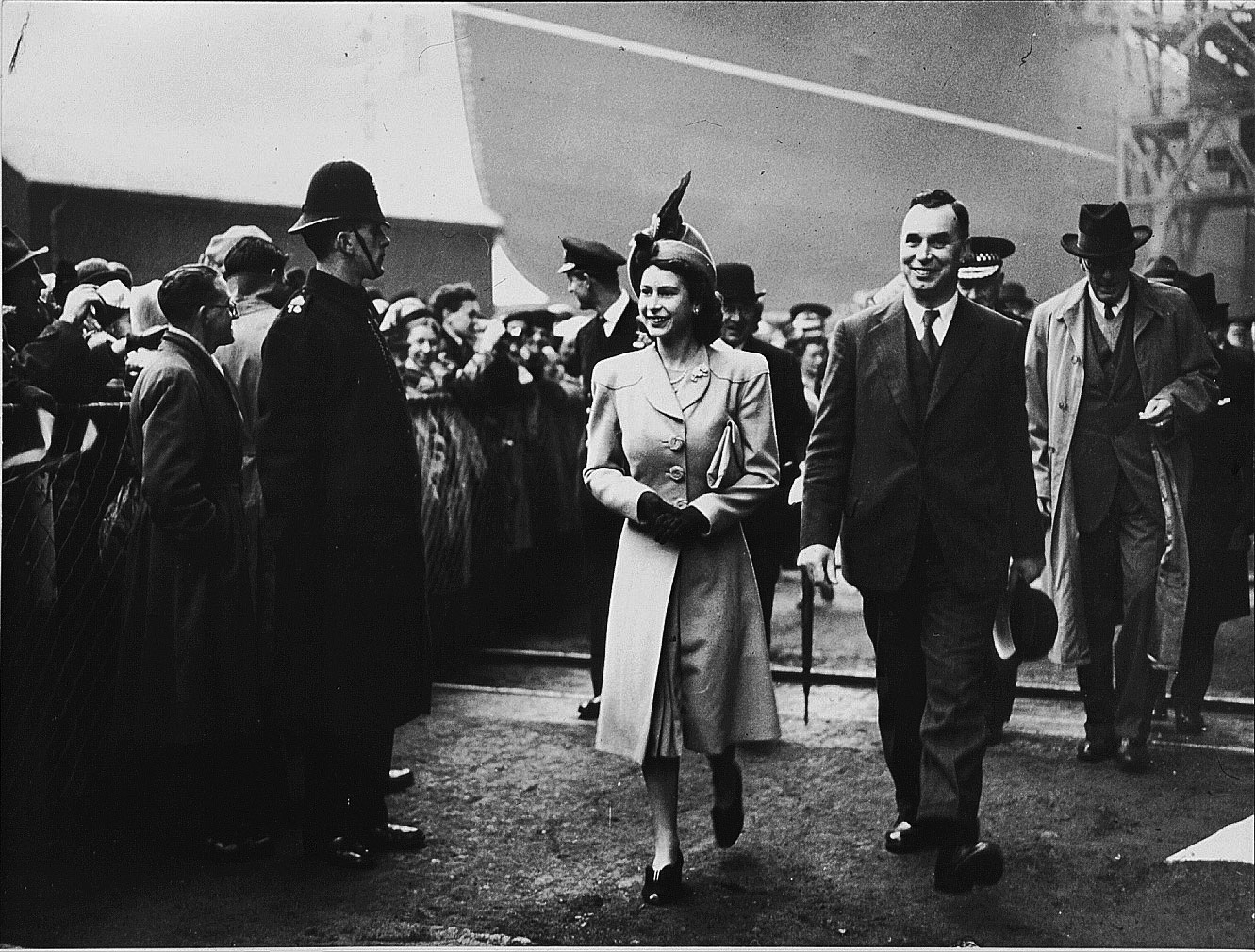 Princess Elizabeth, then 21, found herself in the starring role at the launch of Caronia, a Cunard ship that would become the most luxurious cruise ship in the world and was noted for her unusual green livery.

It was the Princess’s last public function before she married the dashing young Lieutenant Philip Mountbatten, who accompanied his Royal bride-to-be to Clydeside for the occasion.

Despite the rationing regime that persisted long after the war, the launch was celebrated with a lunch of cream of tomato soup; cold turkey, ham and tongue; potato croquette potatoes and green peas; and Pear Melba followed by coffee.

The Queen had her first view of what was to become known around the world as the QE2 as she flew overhead prior to landing at Abbotsinch Airport in Glasgow.

She was driven to the shipbuilder’s offices and met by Admiral Sir Angus Cunninghame Graham, the Lord Lieutenant of Dunbartonshire, who presented Sir Basil Smallpiece and Lord Aberconway to Her Majesty.

After a private luncheon party in the Boardroom, the Queen made a two-minute car journey to the launching berth where she and the Duke spent 20 minutes inspecting the launching arrangements.

At precisely 14.28 on a sunny afternoon, Her Majesty stepped forward on the launching platform and said:

“I name this ship Queen Elizabeth the Second.

“May God Bless her…

[Noise and cheers from the crowd]

“May God Bless her and all who sail in her.”

There was a cheer in the yard from the 30,000 or so spectators as the Queen announced the name.

She cut the ribbon using the same gold scissors that her mother had used to launch Queen Elizabeth in 1938 and her grandmother to launch Queen Mary in 1934, which released the bottle of wine that duly smashed on to the side of the newly-named liner.

She pressed the button that electrically released the launching trigger, but nothing happened.

For what seemed like an eternity, but was actually only 70 seconds, it seemed as if the ship wouldn’t move.

The Queen looked amazed and the smile slowly faded from Prince Philip’s face. Workmen high up on her deck leaned and shouted “Give us a shove!”

Shipyard director George Parker joined in the spirit of the request and bowler-hatted, sprang to the bows and gave the liner a shove.

He jubilantly waved his bowler when, by a coincidence that looked for all the world like a Superman moment, she began to move. And two minutes after the Queen had named her, the new Elizabeth slid smoothly into the Clyde.

Newspapers the next day claimed the Queen had wept as the new ship entered the Clyde and that Prince Philip took a white handkerchief from his pocket and handed it to her.

The Queen was reported to have exclaimed: “Oh, look at her, she’s beautiful.”

The QE2 undertook a special round-Britain voyage and on 27th July 1990, arrived and anchored in her allocated position at Spithead.

Shortly afterwards she was joined by the Cunarders Vistafjord and Atlantic Conveyor and dozens of private yachts, motor boats and excursion vessels, all keen to take part in the planned Royal Review of Cunard, and Royal Navy ships, by The Queen and The Duke of Edinburgh on board the Royal Yacht Britannia.

The Royal Yacht left Portsmouth, led by the Trinity House vessel Patricia and followed by HMS Broadsword, and passed the port sides of the anchored Cunarders.

Concorde, a 767 and a 747 then made a flypast in salute before the Britannia anchored and a second flypast, consisting of a Sea King, Lynx and Dauphin helicopters and a Harrier jump jet, took place.

The Queen and Duke of Edinburgh transferred to the QE2 by Royal Barge and prior to lunch attended receptions in the Queen’s Room and Grand Lounge.

The QE2 berthed ahead of Vistafjord and later that evening both ships were serenaded with a firework finale.

The Queen, once ensconced at Sandringham for the Christmas break, does not perform any public duties – but, for the first time during her reign, she broke the tradition for Cunard and travelled to Southampton with The Duke of Edinburgh to name the Queen Mary 2 – the largest, longest, tallest, widest and most expensive ocean liner ever built, and the first Atlantic liner to enter service in 35 years.

The naming ceremony was distinctly Cunard and has been acclaimed as the most spectacular of its kind ever, featuring performances by The Band of Her Majesty’s Royal Marines (Portsmouth), the Royal Philharmonic Orchestra, and soprano Lesley Garrett – all performing under the direction of one of Britain’s most popular conductors, Anthony Inglis.

On the anniversary of her Coronation, The Queen travelled to Southampton to make a farewell visit to QE2 during the vessel’s last months in service. It was a case of history repeating itself as her Mother had paid a farewell to “her” ship Queen Elizabeth in 1968.

The Queen toured QE2 and met many of her crew prior to unveiling a specially-commissioned portrait of QE2 called Coming Home which depicted the liner making her final entrance into her home port of Southampton.

When that actually happened on 11 November 2008 The Duke of Edinburgh, making his farewell visit to the ship, presented the painting to the City of Southampton as an everlasting reminder of its favourite ship.

She had sat for a specially-commissioned portrait of herself that was to hang on the new ship and during the tour prior to the naming she met the artist and viewed the painting for the first time.

Today, The Queen no longer has a Royal Yacht, Britannia having been retired and opened as a tourist attraction in Edinburgh, but her links with Cunard remain as strong as ever.

The former Royal Yacht Britannia is at www.royalyachtbritannia.co.uk

The Queen is at www.royal.gov.uk