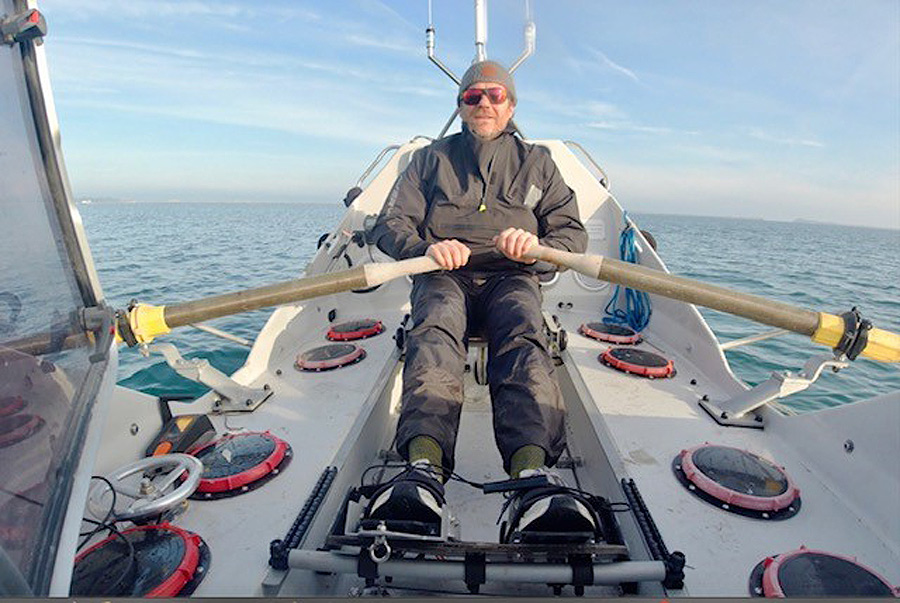 Leading Survitec brand Crewsaver is keeping Dave “Dinger” Bell safe on his unassisted solo row across the North Atlantic with an array of specialist equipment, some of which has been designed specifically for the treacherous crossing.

Weather permitting, Bell, 49, a former Royal Marine, believes the May 2021 row from New Jersey to Falmouth, UK – a 2710 nautical mile route that will pass over RMS Titanic – will take between 90 and 120 days.

While the mainly self-funded NY2UK row started off as a personal challenge with Bell reluctant to tell anyone about the planned crossing, close friends encouraged him to row for charity.

So far, he has raised £7500 for the Special Boat Service Association and Rock2Recovery. Bell is also using his row to promote www.bravery.org.uk, the extreme sports clothing company founded by his veteran friend Toby Gutteridge, who was shot and paralysed on a tour of duty in Afghanistan.

“Dinger’s Crewsaver lifejacket has been specially adapted not to activate upon contact with water so as to avoid inflation in the exposed cockpit of his one-man ocean rowing boat. It has also been fitted with a hood in anticipation of the huge swells he faces in the North Atlantic. The route takes him across the lower part of ‘Iceberg Alley’ where the water is very cold and survival times can be short.

This is a very difficult and commendable challenge for some very worthy charities. I encourage everyone to donate what they can in support of these important causes.

“While we are immensely proud to have donated equipment to this extraordinary human endeavour, we hope it will never have to be activated.”

Dinger Bell was living in Jamaica in 2013 when he had this idea of rowing back to the UK.

“I thought I’ll buy a boat, load it with food, get a good sat nav and row home,” he said. “But in my ignorance of ocean currents and weather systems, I soon realised it’s not possible to row from the Caribbean into the tradewinds. It wasn’t that I wanted to row the North Atlantic; I just wanted to row west to east.”

Bell bought his second-hand boat – a 7.6m long, 1.4 wide Peter Bosgraaf design, re-christened Billy No Mates – for £15,000. And since 2016, he has spent almost twice that fitting it out with hydraulic steering and autopilot, new hatches, solar panels, batteries, a new water maker, and all manner of other modifications.

When Dinger sets out from Liberty Landings, he faces extreme conditions, not least a route renowned for its cold and stormy, inconsistent weather patterns but also one that takes him through the notorious Georges Banks and the Grand Banks, where the Andrea Gale disaster unfolded. This event was made famous by the book and film The Perfect Storm.

“You have deep ocean swells hitting shallow waters, that’s what jacks the size of the waves up. It is a very dangerous place to be, so I am very thankful to Crewsaver for donating the Crewsaver equipment. I could need it.” 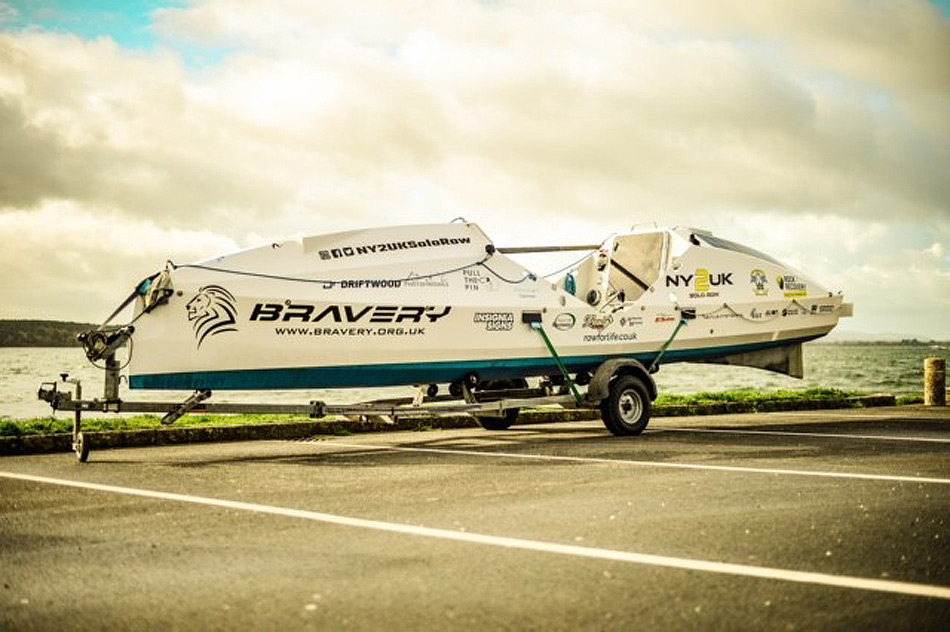 Other than Billy No Mates – the boat itself is always the safest of havens – Bell’s survival equipment includes a Crewsaver immersion suit, lifejacket and safety line, a pair of McMurdo EPIRBS and two Fast Find Personal Locator Beacons (PLB).

One of these will be fitted to a safety harness worn while rowing, the other to Bell’s lifejacket. Both PLBs provide the ability to summon help if he becomes separated from his boat and other emergency gear.

Although two-thirds of those that have attempted to row across the North Atlantic have failed, the New York to Falmouth crossing – referred to as the “classic route” – is particularly difficult due to the unpredictable, inclement weather. Only twelve crews have managed to row the route in more than a century.

The first successful crossing was in 1896 by two Norwegian fishermen. Since then, only one person has rowed this route solo. That was Ollie Hicks in 2005. However, he was forced to take a resupply after running out of food. This means the ‘classic’ route has still never been rowed solo and unsupported.

Dinger Bell hopes to be the first.