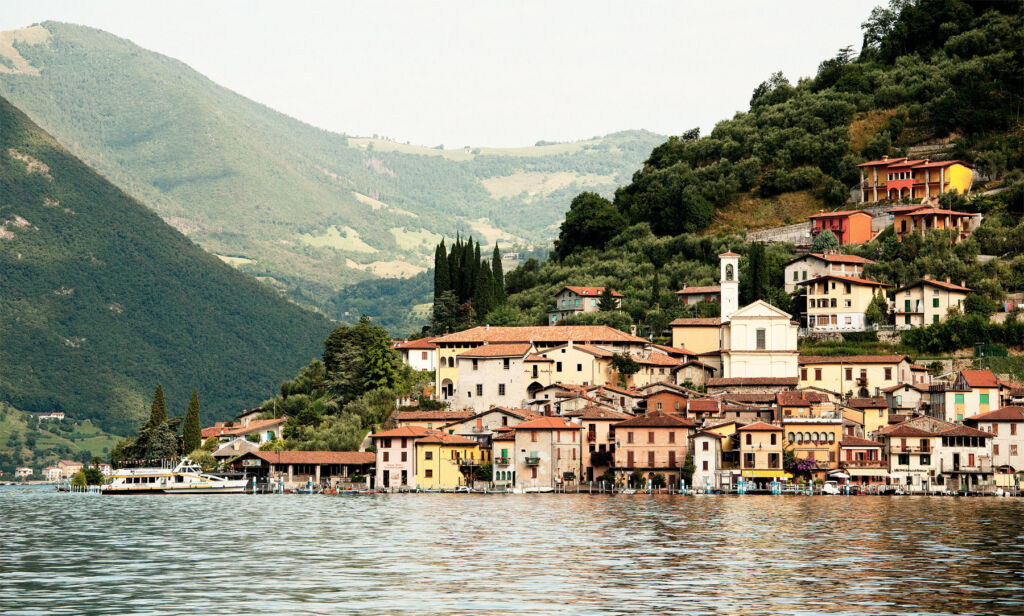 Mention Italian fizz, and most people will immediately think of Prosecco. While this popular celebratory drink is excellent, a lesser-known high-quality sparkling wine has earned itself a rightful place on the top shelf. It’s called Franciacorta and has given the Lombardy region in northern Italy a much-needed renaissance.

Franciacorta is widely regarded as Italy’s finest sparkling bubbly and is produced in the area of the same name in Lombardy in northern Italy. Unlike Prosecco and Moscato d’Asti’s lighter-hearted styles, Franciacorta is more complex and oozes finesse.

To learn more about this sparkling wine and the area, I was invited to the region to understand what makes Franciacorta so unique and on par with Champagne. 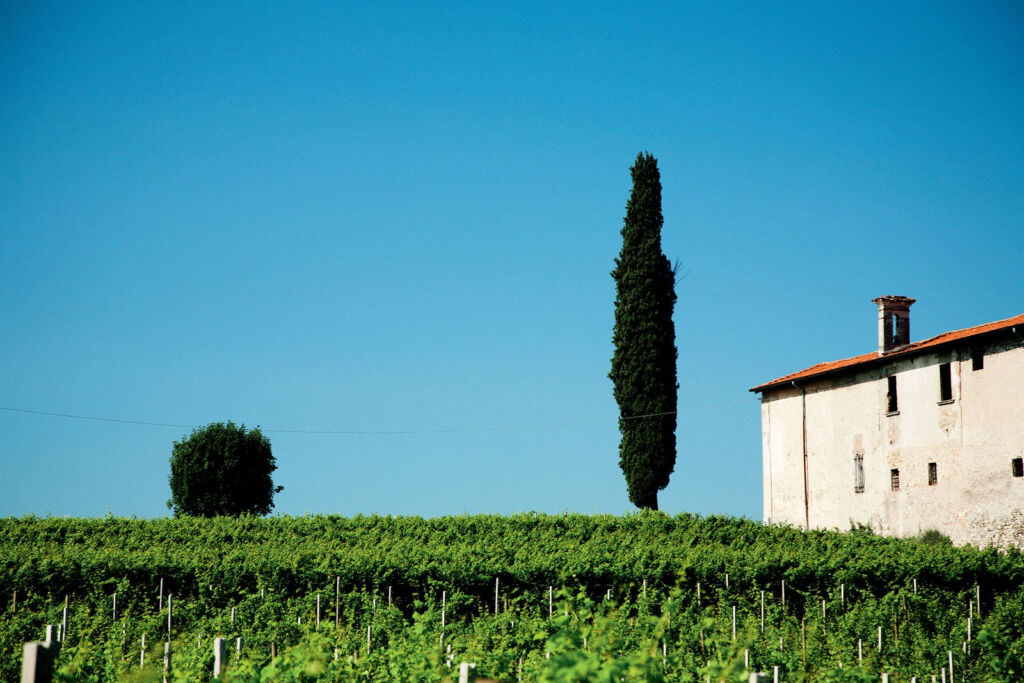 The Franciacorta wine region is in the Brescia province in the hills south-east of Lake Iseo. It stretches eastwards for 15 miles from the Oglio River until it reaches the Mella River Valley and the western suburbs. Available in both vintage and non-vintage forms, there is a white version as well as a rose version.

Tasting notes for the Franciacorta Brut wines are almost identical to their Champagne equivalents, but there are differences, namely the history and volume produced.

While Champagne has been around for around 350 years, Franciacorta is still in its infancy at 50 years. Berlucchi winery consciously emulated Champagne and became the first to give its sparkling wine creation the name Franciacorta in the late 1950s. After being well-received, others jumped on the bandwagon, and the style took off.

The Franciacorta DOC title was created in 1967 to cover the region’s sparkling wines. Franciacorta was awarded the DOCG status in 1995 when there were 45 producers. Now there are 115. In terms of volume, Franciacorta’s annual production is around 27,000 hectolitres while Champagne’s production is 100 times as much. 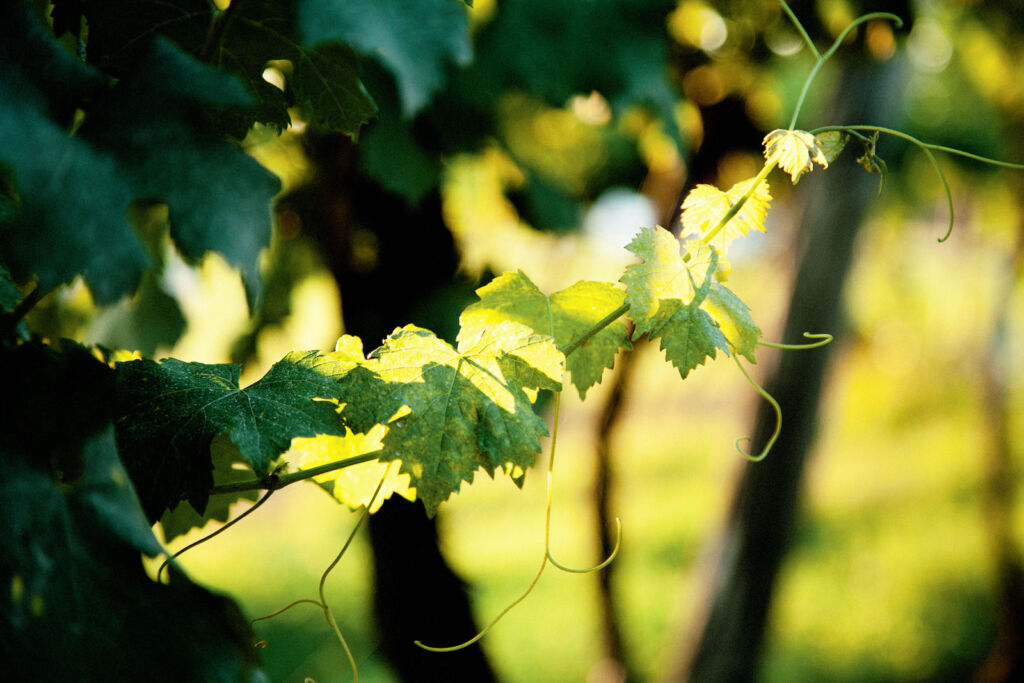 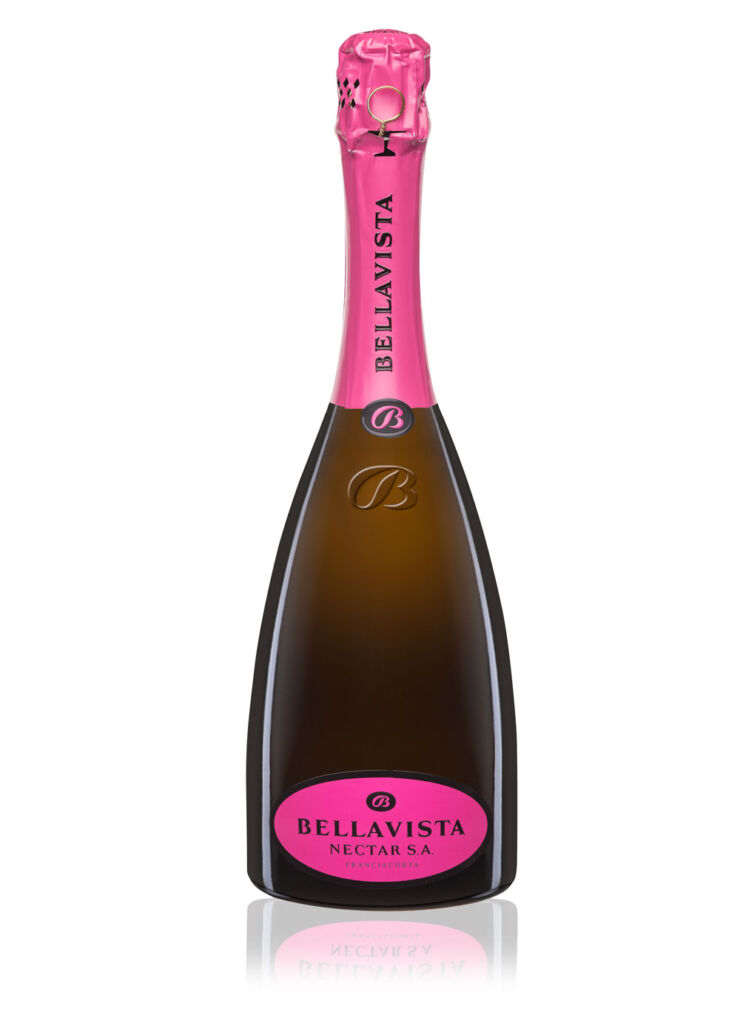 During my visit, I had the chance to visit three distinct wineries. Kick-starting the mini-tour was our first stop to Bellavista, which has had a big hand in transforming one of Italy’s most famous DOCG’s.

Their journey began over three decades ago when proprietor Vittorio Moretti started making wine as a hobby, producing his first sparkling wine in 1984. Fast forward to today, and he manages a 190-hectare wine estate.

The winemaker uses methods similar to Champagne making to produce vintage and non-vintage sparkling wines. The former wines follow a protocol of spending a minimum of 30 months on the lees in bottles, while for the non-vintage, it’s 18 months.

We had the enviable task to taste a selection of their sparkling wines, and if I was to do a blind taste test, I would say some of them tasted just like Champagne. I would describe the notes as elegant, refined and creamy. 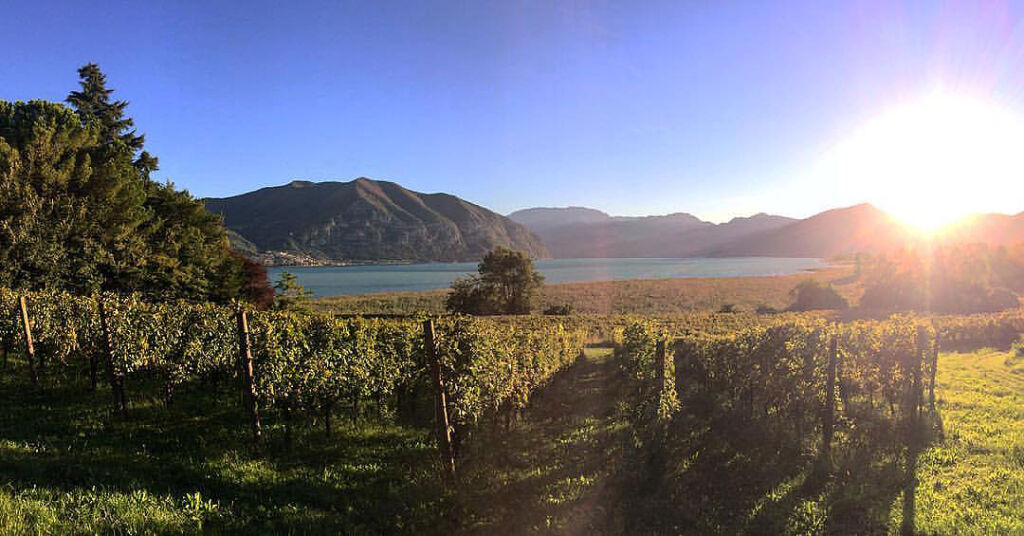 Our second stop was Ricci Curbastro. The family has vineyards in three different villages and has grown grapes in Franciacorta since the 14th century. They were one of the first 11 producers of this wine style. Riccardo, whose three sons also work at the vineyard, talked us through the history of wine production in the area. He said the region itself is hilly and was formed by glaciation. 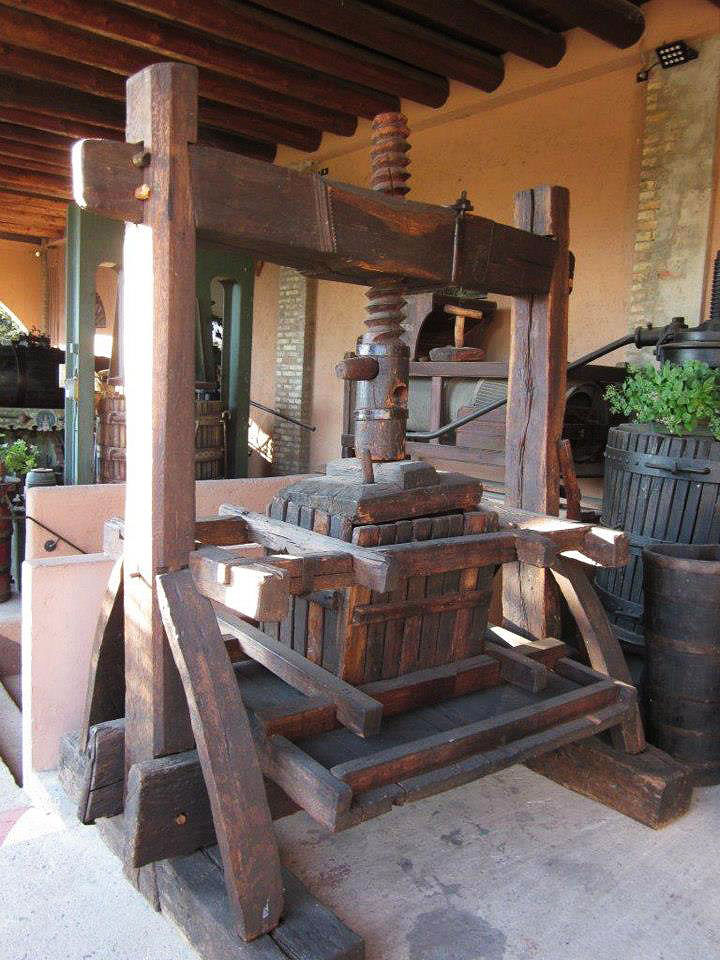 Glacial activity means the soil changes every few hundred metres resulting in 60 different profiles. Speaking passionately about the bubbly as we sipped a range of wines from a wide slender glass like the Franciacorta chalice to appreciate the full range of aromas, Ricardo said, “Tasting and creating the blend is like painting.”

The Agriculture and Wine Museum is another reason to visit this winery. The museum is the result of more than thirty years of research carried out by Gualberto Ricci Curbastro.

Inaugurated in July 1986 and expanded over the years, the museum within the cottages of the Ricci Curbastro Farm Estate houses thousands of objects illustrating agricultural practices of the past.

Visitors can book tours ahead of their visit, which lasts around 90 minutes. The on-site wine cellar is also open to the public from where they can have the opportunity to purchase wines direct during a visit.

Sustainability is at the heart of the company that practices organic farming. Since 2017 it became the first in Lombardy to be certified as a “Sustainable Company” for its commitment from an environmental, economic and social point of view. They are one of just nine of the top companies in Italy to be recognised for these practices.

Castleveder
Our third and final vineyard and winery stop was the Castleveder estate, which produces 80,000 bottles of grapes from the vineyards that still retain their first names: Ronco del Castelletto, Madonna Della Rosa, Palazzina and Cilinder, Nulli and Guast and Capelét. Clusters of Pinot and Chardonnay with fleshy transparency, Merlot, Barbera; Cabernet and Nebbiolo allow Castelveder to have raw material of the best quality.

The story began with Renato and Elena Alberti, who, in 1975, was convinced that the secret of the bubbles was in their land and subsequently planted the first cuttings with confidence. The result of this adventure are wines sculpted by nature and married by tradition. The values of Elena and Renato have been collected by their niece Camilla who runs the company today.

The Castelveder Winery also has a room for 100 people dedicated to hospitality. The Saloncino Castelveder allows you to savour the goodness of wine in an elegant and comfortable space. The space is available to hire for business meetings, weddings, exhibitions, shows and dinners with friends.

During the summer, guests can make the most of the outdoor space and be totally immerse themselves in the landscape of Franciacorta. Castelveder is also involved in organising events of cultural interest both in the field of food and wine and in the artistic field with theatrical performances, amateur film reviews and concerts. 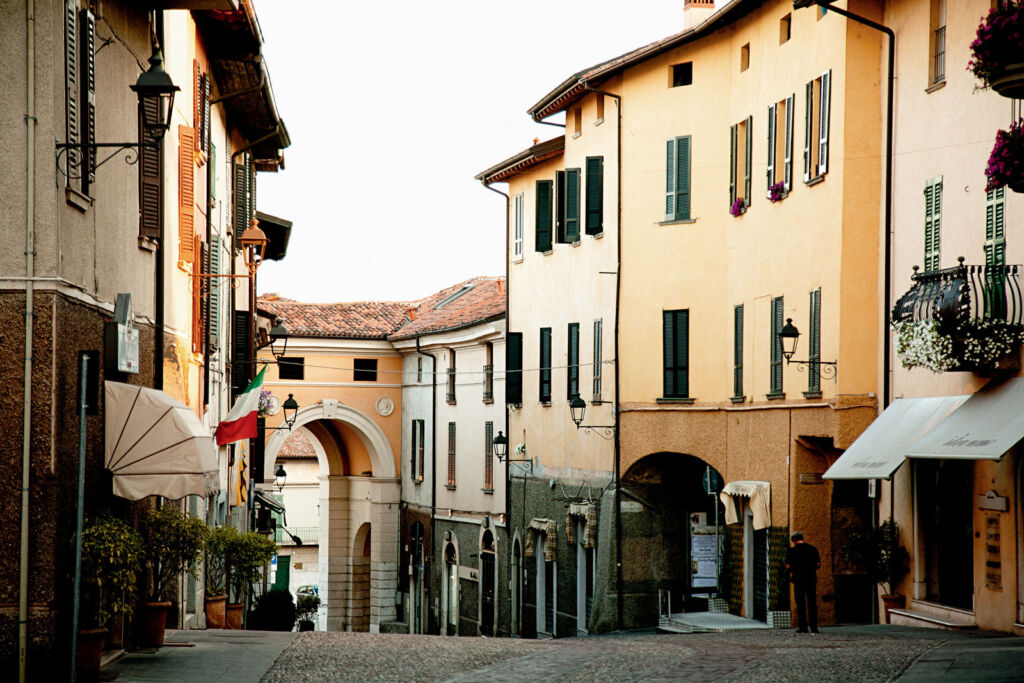 Beyond the Franciacorta fizz
Aside from the vineyards, there’s plenty more to see and do. The whole of Franciacorta is rich in historical and naturalistic testimonies (Natural Park of the Torbiere del Lago d’Iseo, Abbey of Rodengo Saiano, Monastery of San Pietro in Lamosa) and is an ideal base for visiting cities of art such as Bergamo (24 km), Brescia (25 km), Cremona (60 km), Milan (75 km) or to easily reach the cities of Veneto by train or car.

Vallecamonica, with its ski resorts and the rock engravings of Capo di Ponte, completes the offer for a holiday in Franciacorta. As ever with these trips, there wasn’t much time to do everything I wanted to do in the region, but I did have time to squeeze in a spa wine treatment at the Cappuccini Resort and a boat tour of Lake Iseo from Sulzano just before I headed back to Milan airport with a bottle of Franciacorta bubbly as a souvenir from my trip.

Franciacorta – Where and How?

The Consorzio Franciacorta is the body that guarantees and monitors respect for the Franciacorta production code, the first wine in Italy produced exclusively by the classic method of refermentation in the bottle to win in 1995, the status of Denominazione di Origine Controllata e Garantita.

The activities of the Consorzio include protection of the brand and of the growing area, continuing perfection through constant improvements to the production code and related regulations, providing information to consumers, monitoring the wines through the sales process, and the promotion of Franciacorta as the expression of a growing area, a wine, and a production method.

Founded on 5 March 1990 and headquartered in Erbusco, in the heart of Franciacorta, the Consorzio is made up of 116 producers, and its president is Silvano Brescianini.