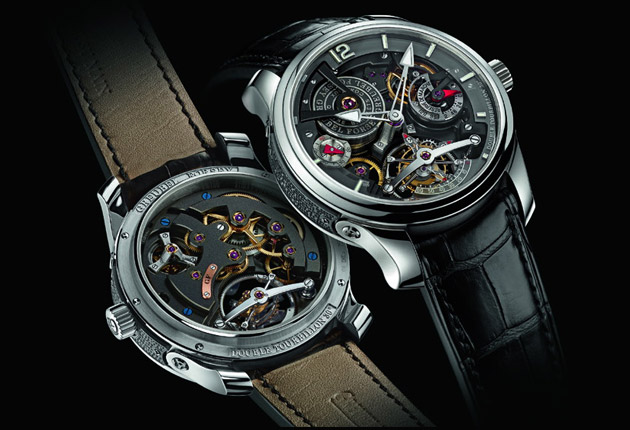 Structural features of this watch allow to see all the details of the mechanism and their interaction. The caliber basis consists of the innovative mechanism of Double Tourbillon 30 °, in which one tourbillon inclined at an angle of 30 ° and making a 60-second turn, is placed inside of another one, making complete circle in every four minutes. The purpose of this invention is to eliminate the errors of the clock pace, caused by the Earth’s gravity influence on the oscillator. Further technical developments include four rapidly rotating coaxial barrels, connected with the visible spherical differential driving the power reserve indicator.

Pointers with numbers are displayed on a transparent clock ring of sapphire glass, placed inside the rim of the dial, creating an amazing illusion of depth, volume and three-dimensionality. Names of the Double Tourbillon Technique’s creators, Robert Greubel and Stephen Forsey, are inscribed on the case side and provide features of exclusiveness.

In addition to having all characteristics of a horology masterpiece, the model, available in white and pink gold and platinum, was personalized even more by Dmitry Berdyansky. Appreciating Berdyansky’s contribution into expansion of Ukrainian luxury market, Greubel and Forsey has met the desires of their good friend and made a single copy of the watch especially for him, released in white gold with blackened mechanism with some parts of pink gold inside. Plates with the names Robert Greubel and Stephen Forsey on the case side surface are emphasized by blackening.

Heads of the Greubel Forsey company liked Berdyansky’s design decision so much that, meeting the demands of the most passionate collectors, they decided to release two novelties with a similar tuning, but in platinum and rose gold this year, in a limited edition of 22 copies.