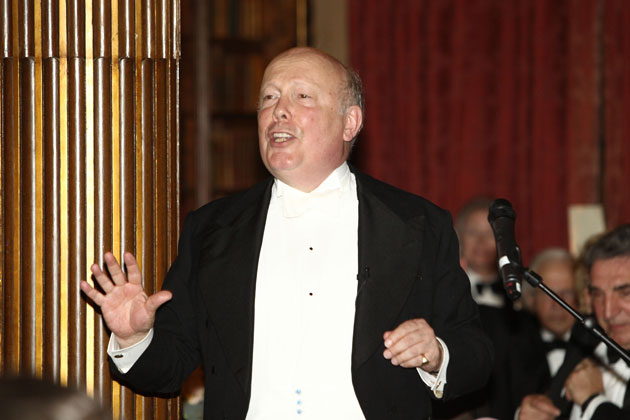 very special and exclusive event for just 140 guests was held at the end of March at Highclere Castle, Hampshire, England. Popular English actress Susan Hampshire, OBE suggested a Downton Abbey themed event to benefit the two charities of which she is patron, JDRF the type 1 diabetes charity and the National Osteoporosis Society.

Magic was added to the event when Julian Fellowes, the creator and writer of Downton Abbey which is largely filmed at Highclere Castle, agreed to support the event and was joined by some of the cast of the global, hit TV show.

Highclere Castle is the ancestral home of the 8th Earl and the Countess of Carnarvon. The present Earl’s ancestor the 5th Earl of Carnarvon financed Howard Carter’s discovery of the boy king Tutankhamun’s tomb in the Valley of the Kings, Egypt in 1922. Highclere Castle is still the home of a collection of Egyptian antiquities from the 5th Earl’s personal collection. On his death most of the collection was sold to the Metropolitan Museum in New York, apart from a “few unimportant items” according to Howard Carter. The family only discovered these tucked away in cupboards in 1987.

Guests left the 21st century at the door of Highclere Castle being greeted by castle staff and stepping into the splendour of the great hall to the authentic 1920s jazz sounds of Tom ‘Spats’ Langham and his Hot Fingers trio in period costume.

Guests who were asked to wear either black tie or 1920s dress, which included a smattering of British and US military uniforms and some very glamorous 1920s dresses complete with beads and fringes and at least one tiara, dined in the library which will be very familiar to millions of TV viewers. The menu included Branson’s smoked trout salad. Mr Drewe’s roasted rump of lamb and Mrs Patmore’s saffron poached pear and Daisy’s stewed fruits.

Despite a heavy filming schedule which included the day before and the day after the event with 6.00 am starts, several of the cast attended and delighted the guests with their anecdotes and willingness to sign autographs and pose for photos. One evening programme was signed by cast members for Crystal and Hugh Hefner who are huge fans of the show. 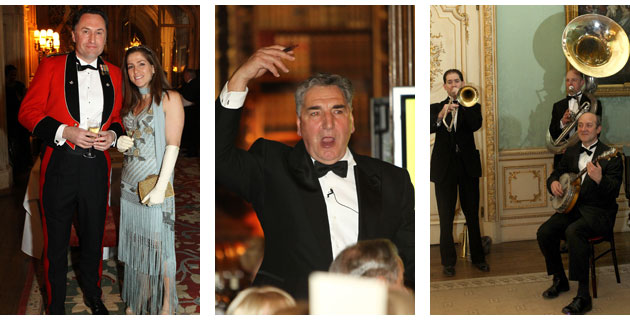 Julian Fellowes entertained guests with anecdotes about the show and stories of the show’s popularity worldwide and curiously its, hopefully temporary, unpopularity in Bogota, Colombia at the killing off of one particular character. Questions asked of Julian included how he decides to exterminate characters and whether Carson might have any love interest in a forthcoming series, posed by one Mr Carter.

The 140 guests who hailed from as far afield as Jamaica, Milwaukee, Atlanta, Texas and Canada, raised a total of £ 172,000 on the night which will be shared by the two charities.

Click below to see more image of Ian Stevens, the cast of Downton Abbey and Guests