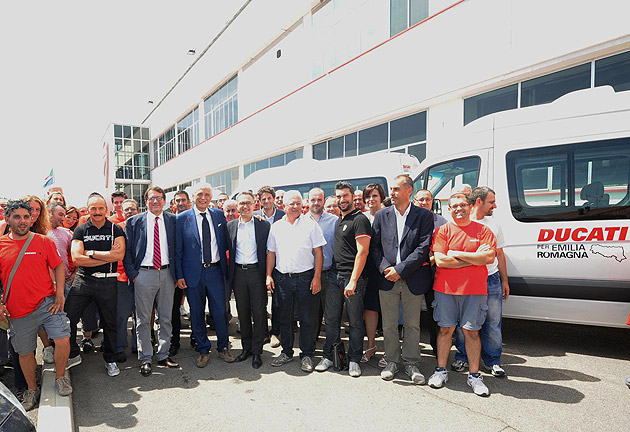 Just a few months after the major earthquake that hit the Italian region of Emilia Romagna, a simple yet heartfelt ceremony at the Ducati factory in Borgo Panigale, Bologna was held on Friday, 3 August to mark the donation of three Volkswagen Crafter Kombi vans.

The vans were purchased with funds raised by Ducati workers, Ducati Clubs from all over the world and, of course the company itself.

At the ceremony, attended by company managers and hundreds of company employees, Gabriele Del Torchio, CEO of Ducati Motor Holding, formally handed over the keys to three Volkswagen Crafter Kombi vans to Fernando Ferioli, Mayor of Finale Emilia, Claudio Broglia, Mayor of Crevalcore and Rudi Accorsi, Mayor of San Possidonio. The ceremony represented solidarity from Ducati for three of the region’s hardest-hit towns that are also home to many Ducati employees and several of the firm’s suppliers whose facilities were damaged in the earthquake.

In addition to the three mayors, the handover ceremony was also attended by Giancarlo Muzzarelli (Industry Councillor for the Region of Emilia Romagna), Giacomo Venturi (Vice President of the Province of Bologna) and Elena Malaguti (Education and Culture Councillor of the Province of Modena).

The fund-raising began immediately after the earthquake and continued until World Ducati Week 2012, the international Ducati rally held from 21-24 June 2012 at Misano Adriatico. The event attracted over 65,000 visitors and enabled Ducati to involve Ducati Owner Clubs from all over the world and the vast Ducati community who all responded to the appeal enthusiastically and generously. Fund-raising was organised by trade union representatives from the company and, in addition to donations made by Ducati , Ducati employees and Ducati Clubs, a series of initiatives linked to on-line Ducati website sales also helped to increase the proceeds towards the purchase of the three vans.