Ducati has unveiled the long-awaited 1199 Panigale Superbike alongside its entire 2012 range in a stylish Press Conference at the Teatro Dal Verme in Milan, Italy. Setting a new benchmark in the motorcycle industry with their ground-breaking and innovative new Superbike, the Italian manufacturer’s incredible line-up of dream motorcycles are now set to be exhibited in November 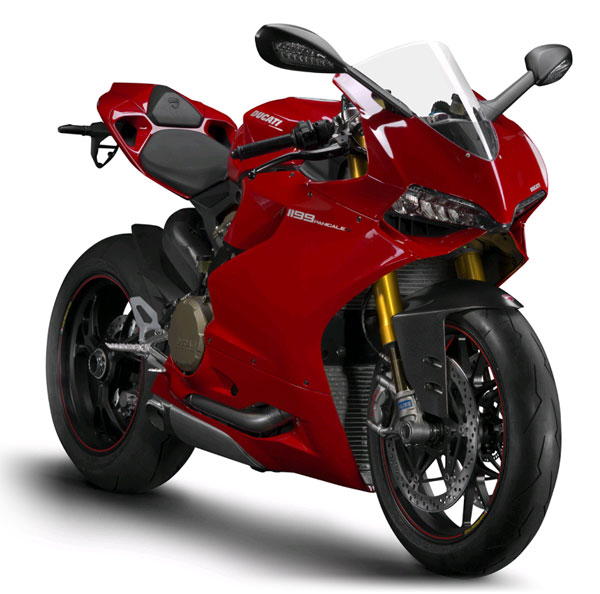 at EICMA 2011, the 69th edition of the Milan International Motorcycle Show.

The impressive theatre presentation of Ducati’s 2012 models also gave Gabriele Del Torchio, President of Ducati Motor Holding, the opportunity to announce the positive business performance of the Bologna-based company. In a market challenged by economy difficulties, Ducati has continued to increase its market share, production volumes and global sales, confirming their solid position and underlining the efficient and well organised business structure that will now serve the company in the coming years.

“It is the hard work of all the men and women at Ducati that has resulted in the positive results that I present today and it validates the strategy we followed during the period 2007-2011,” said Gabriele Del Torchio during the conference. “Thanks to our focus on product development, increased investment and our work to maintain the desirability of our brand around the world, I take great satisfaction in announcing that 2011 has been the most successful year in the history of Ducati.

“Sales of approximately 42,000 motorcycles have generated revenues of €480m, a 20% increase over the previous year and just reward for our highly innovative products. It gives us the confidence to believe in the pillars of our strategy and to continue on our ‘mission’ to be specialist leaders of the sportbike segment by further developing innovative and class-leading motorcycles.  “All of this has enabled us to present the incredible new 1199 Panigale Superbike, the new benchmark in the sportbike arena. Without doubt, this has been the most ambitious project in Ducati’s history and underlines our engineering excellence and ‘product emotion’, an aspect of our brand which, in such a competitive market place, has become more important than ever. This motorcycle represents pure Italian style, the reference point for performance and a safety-enhanced, confidence-inspiring experience for our customers on road and track.

“We are particularly proud to have created a special ‘Tricolore’ version of this new motorcycle, in the red, white and green of Italy. What better occasion to celebrate the 150th anniversary of our national flag and underline our role and responsibility as ambassadors of the title ‘made in Italy’, than with a product of such style and technical excellence.”

“Throughout our long and successful twin-cylinder history of racing, Ducati has never built a sportbike as advanced as the 1199 Panigale Superbike,” said Claudio Domenicali during his presentation. “We are moving into a new generation with a ‘revolution’ of the species that establishes new limits for the category. Its Desmodromic heart, the new Superquadro engine, is the most powerful twin-cylinder ever produced and represents the base of a new concept of frame and engine integration. This concept enables the 1199 Panigale a dry weight of just 164kg and gives it a riding sensation that is closer than ever to a full race bike. With revised ergonomics, full Ride-by-Wire engine management and enhanced systems of ABS and traction control, we have controlled the beast within the 1199 Panigale Superbike so that the full emotion of this motorcycle can be enjoyed easily and safely.”

Indeed, the 2012 Ducati Superbike family marks the official introduction of the ground-breaking 1199 Panigale, 1199 Panigale S and flagship 1199 Panigale S Tricolore and opens a new chapter in the company’s iconic Superbike history. Available early in 2012, Ducati’s new generation Superbike, goes beyond the barriers of motorcycle design and engineering to set the most extreme benchmark ever and the direction for future sport bikes. Developed in the red-hot environment of racing and designed to raise the performance bar to its highest, the 1199 Panigale uses innovative Ducati Corse-derived solutions to make World Championship level technology available to everyone.

The most high tech, most powerful twin-cylinder production engine on the planet is now an integral part of an innovative monocoque chassis that combine to deliver an astonishing 195hp from 164kg (361.5lb) of futuristic Italian thoroughbred. The highest production motorcycle power-to-weight and torque-to-weight ratios in the world are fitting trophies for the incredible results that Ducati have achieved. Bred for the track and trained for the road, the new 1199 Panigale is a true revolution of the species destined to influence the entire sportsbike environment.

2012 sees the excellent new Streetfighter 848 take its place alongside the awesome firepower of the Streetfighter S to broaden the stylish and exciting, high-performance naked family. The new 848 fighter is dressed in red with a red frame for Ducati traditionalists, while yellow makes a comeback and the stunning dark stealth scheme underlines the Streetfighter’s aggressive image. The Streetfighter S comes to the fight in Ducati red and the brand new for 2012 “race titanium matte”, both schemes with red frames and black wheels.

The innovative Ducati Diavel introduces a new Cromo model for 2012, in addition to the Diavel AMG Special Edition, recently unveiled at the Frankfurt Motor Show. First introduced to an excited public at the 2010 Milan International Motorcycle Show, the Ducati Diavel went on to amaze motorcyclists the world over, collecting awards along the way and becoming one of Ducati’s top selling models. For 2012, the groundbreaking Ducati is available in four exciting versions. The standard Diavel, and the Diavel Carbon – with a character-forming mix of aesthetic and performance components – now stand alongside the brand new and stunning Diavel Cromo and the exclusive Diavel AMG Special Edition.

The press conference for Ducati’s 2012 model range also presented an opportunity for the company to celebrate the winning of the Riders’ and Manufacturer’s titles in the 2011 World Superbike Championship with Carlos Checa and Riders’ and Manufacturers’ titles in the 2011 Superstock 1000 FIM Cup with Davide Giugliano. Both riders rode Team Althea Racing Ducati 1198s to their respective victories and both bikes will be proudly shown on the Ducati stand at EICMA 2011.