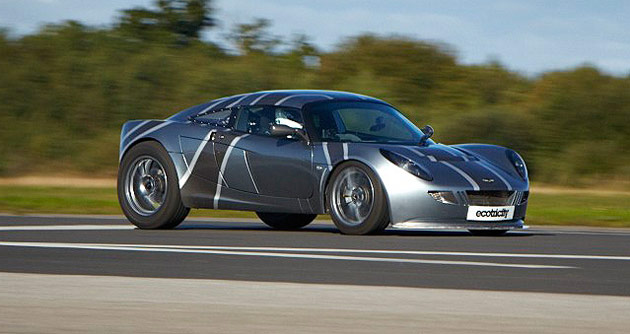 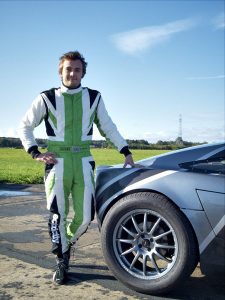 The ‘Nemesis’ is the brainchild of Dale Vince OBE, who founded the world’s first green electricity company, Ecotricity, in Stroud Gloucestershire, and was driven by 21-year-old Gloucester Formula BMW and Formula Ford racing driver, Nick Ponting, at Elvington Airfield near York.Ponting completed two runs over a one mile distance, breaking the record on the first set of attempts with an average speed of 148 mph. The Motor Sport Association was on hand to officially verify the feat, with the ‘Nemesis’ needing to complete two runs in opposite directions along the runway within 1 hour to account for prevailing winds. The average speed of the two runs provided the official time.

Powered entirely by 100% green electricity made by Ecotricity’s network of 53 windmills around the UK, and based on a second-hand car from eBay which was re-built from the ground up, the ‘Nemesis’ was designed and constructed in less than two years by an ‘A-team’of leading British motorsport engineers in Norfolk. The personnel involved with the project have been responsible for developing some of the most inspiring sports cars ever made – the McLaren F1, the Lotus Elan, the Corvette 2R1, the Jaguar XJR15, and the De Lorean, a group who also problem-solves for the world’s top motorsport teams.

Unlike a combustion engine, electric cars have 100% torque from a standing start, and in initial speed tests last year, the road-legal ‘Nemesis’ did 0 – 100mph in 8.5 seconds. The ‘Nemesis’ can travel from 100-150 miles between charges depending on driving style, and can be charged from empty in under 30 minutes using rapid-charging infrastructure.

Last summer, Don Wales, attempted to break his own UK land speed record for an electric car, claimed in 2000, but ran into trouble on the beach at Pendine Sands in Carmarthenshire when his son Joe hit a pot hole in the Bluebird during the preliminary runs.