Simon Wittenberg explores the story behind US-based Ember, and gets to grips with their newly-launched Travel Mug².

Who is Ember?
You may not have heard of Ember, and I certainly hadn’t before a press release arrived in my inbox.

Based in Westlake Village, California (USA), Ember Technologies, or Ember for short, was founded in 2012 by Clay Alexander, an American inventor and serial entrepreneur.

He established the business because he genuinely believed in the transformative power of temperature control, and saw the potential for innovation in this area.

In other words, he wanted to solve a simple yet universal challenge faced by coffee and tea lovers around the world – how people can keep their hot drink at the ideal temperature for as long as they want.

The company, which positions itself as a design-led temperature control brand, was created in partnership with the renowned San Francisco-based design studio Ammunition, and successfully secured $8.5 million worth of investment in its first five years of trading, from the likes of CEOs, athletes, producers, directors and musicians, as well as from the multi-platinum singer and songwriter Demi Lovato.

Ember also hired a talented team of product designers, engineers and executives who had previously worked for global corporations such as Apple and Nokia, and in November 2016, the first product to be launched after several years of development, was the Ember Mug.

It was an instant success, thanks to being stocked by Starbucks and Amazon, amongst other outlets, and became the world’s most precise temperature-controlled mug.

The following year, Ember went on to successfully receive a further $13 million in a Series C financing round to develop additional products, and the current range now includes the second generation 10oz (295 ml) Mug in three different shades (priced at £129.95 excluding shipping), and the newly-launched second iteration of the smart matt black Travel Mug, known as the Travel Mug² (which costs £179.95 excluding shipping).

How does Ember’s award-winning technology work?
Ember’s patented temperature-control technology combines a phase change cooling system with an active heating mechanism. Instead of pouring a piping hot drink into a paper cup or travel mug, and waiting for it to cool down to a comfortable drinking level, the Ember receptacle will rapidly cool a hot beverage down to the user’s preferred drinking temperature (between 50°C/122°F to 62.5°C/144°F), and will then hold it at that exact level of heat for up to three hours when on the go (depending on the product), or all day long when used with the charging coaster. The digital display on the exterior of the Travel Mug also informs the user when it is empty or cold. 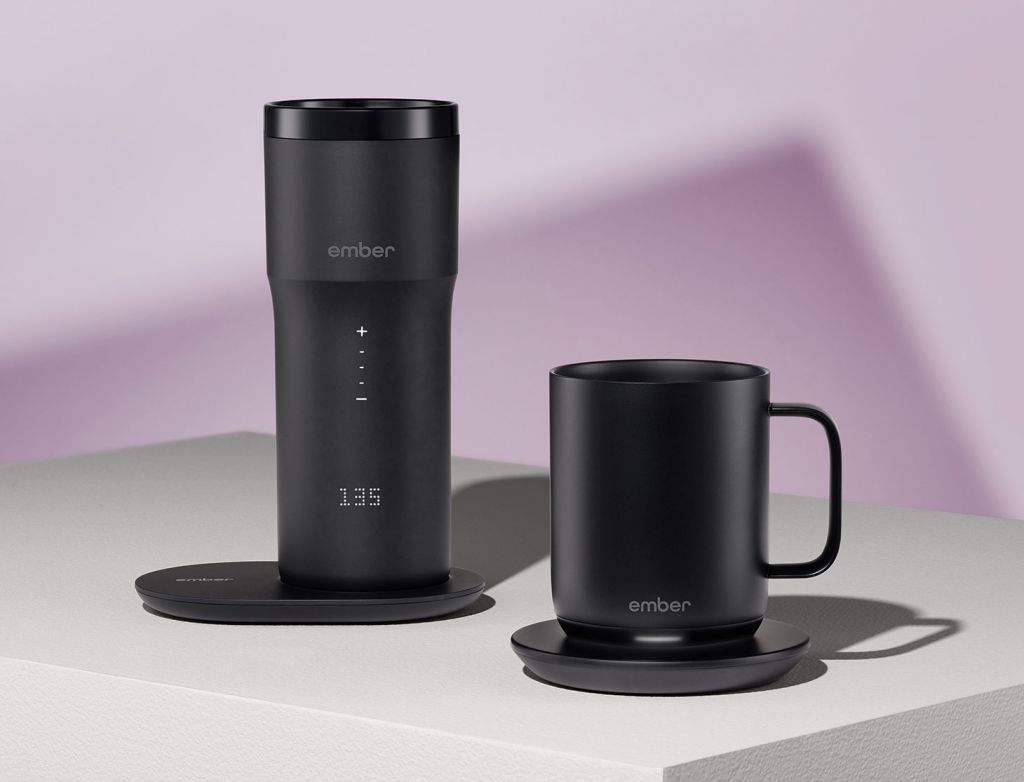 It’s generation2…
Ember’s second generation of products, including the Travel Mug, has been completely re-engineered compared to the first version. New features include 50% longer battery life, plus it comes with a redesigned coaster. The Travel Mug² is also 15% lighter than the previous iteration, and there’s a new hidden-until-lit touch display that replaces the rotating dial at the base of the mug. In addition, the temperature can be adjusted on the Travel Mug by tapping the plus or minus symbols, and it’s also easier to see the remaining battery life.

Another cool feature is that, in the modern age of apps, there is, of course, a dedicated app on the App Store that allows the creation of presets, and the ability to control the temperature remotely within the permitted range.