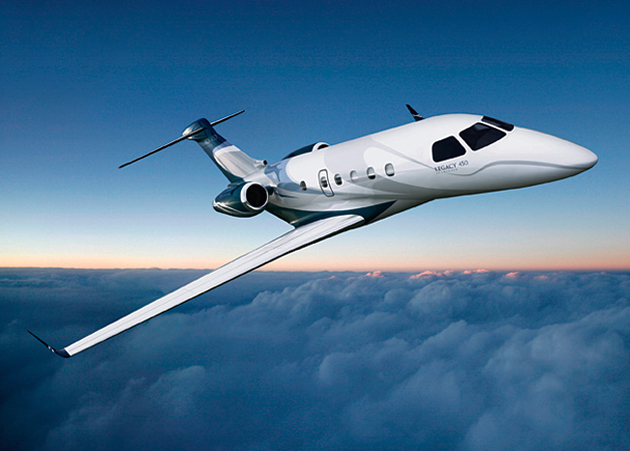 Embraer’s development program for its midsize, 3,000-nm-range Legacy 500 executive jet achieved several significant milestones recently including taxi runs and the beginning of Ground Vibration Tests (GVT) in anticipation of the first flight scheduled for the third quarter. Milestones also include developments in the second and third prototypes. Concurrently, the Joint Definition Phase (JDP) has started for its sister aircraft, the mid-light, 2,300-nm-range Legacy 450 executive jet.

“We have achieved key milestones that make us confident we will perform the Legacy 500 first flight in the third quarter of this year, as planned,” said Marco Tulio Pellegrini, Sr., Vice President Operations and COO, Embraer Executive Jets. “The tests demonstrate the aircraft is very mature regarding systems design and integration. As the Legacy 500 starts its test campaign, development of the Legacy 450 project grows with the JDP well underway.”

The Legacy 500 first prototype began taxi tests, achieving 40 knots and then 80 knots, and GVT in March. At the same time, the Wing Fuselage Junction and the first Power On were completed on prototype #2. Production also completed the fuselage junction of Prototype #3, which will be the first to have the complete interior. The development test benches have also been busy. The Iron Bird, a flight controls integrated test facility is being used to evaluate the equipment and components of the fly-by-wire flight controls, avionics, hydraulics and several other system interfaces, logging over 1,700 hours of tests. There are more than 800 Embraer engineers supporting the technical efforts to achieve certification by ANAC (Brazil), FAA (USA), EASA (Europe), and other aviation authorities in key markets throughout the world.

The aircraft will be the only ones in their categories equipped with cutting-edge, fly-by-wire electronic flight controls that increase operational and passenger comfort, while reducing pilot workload and fuel consumption. The Legacy 500 was rolled out on December 23, 2011. On January 17, 2012, Embraer accomplished the first engine run at its headquarters in São José dos Campos, Brazil. The tests were successful with all functionalities and interfaces operating as expected.

A series of preparatory evaluations – such as APU tests and first refueling – were held on the day prior to the engine run. Engine tests are essential to properly evaluate all dependent systems:  bleed air, electrical, environmental (air conditioning), hydraulic and FADEC logics as well as the  integration of the engine with avionics. Pressurization was also performed with excellent results in addition to successful steering and braking tests.