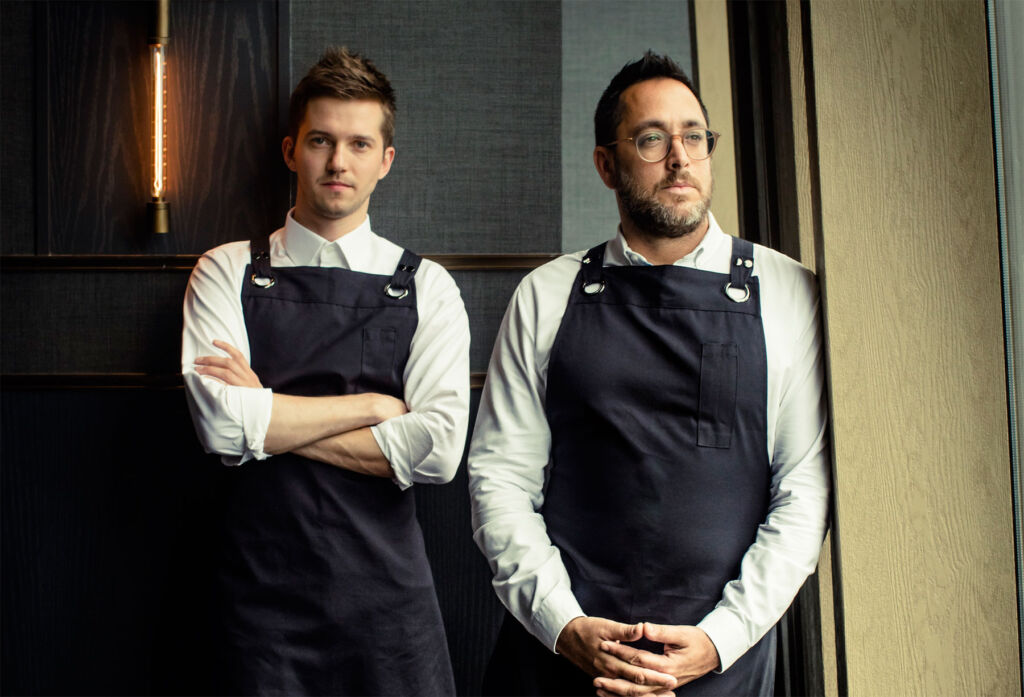 Ensue, Chef Christopher Kostow’s first restaurant in China, led by Head Chef Miles Pundsack Poe, has been acknowledged as one of Asia’s 50 Best Restaurants 2022. The accolade means it becomes the first restaurant from Shenzhen and the South China region to make the list.

Ensue: The Vision and Concept
Launched in the summer of 2019 in Shenzhen, Ensue is the brainchild of globetrotting gastronome, Founder & Owner Ricky Li and Executive Chef Christopher Kostow, led by Canadian Head Chef Miles Pundsack Poe. The clue to the restaurant’s philosophy is in its name: Ensue implies constant motion and continuation, evolution and the precipitation of results. 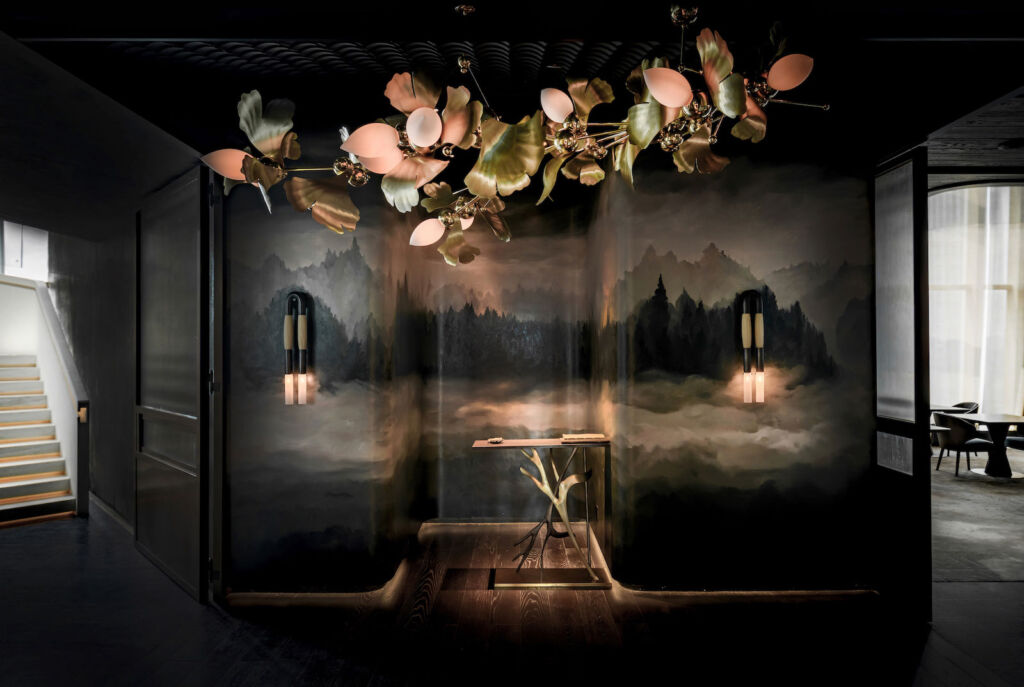 It is a restaurant that is innovative and progressive, much like the city it has made its home. Chef Kostow is no stranger to this philosophy, having maintained three Michelin stars over nine consecutive years at The Restaurant at Meadowood, before making the unconventional move to Shenzhen — a world away from his greenery-filled estate in Napa Valley.

A year before the restaurant’s officially opened, Ricky and Kostow and Miles embarked on an intensive research trip around the South China region. During their travels, they learned of the abundance and variety of Chinese ingredients – especially within this particular region – which could be utilised in the menu developments of Ensue.

In addition, Ensue also invited renowned food critic Agnes Chee to work closely with Chef Kostow and Miles to translate the Napa experience in Shenzhen to the taste and sensibilities of Chinese dining culture.

“I’m passionate about food,” says Founder and Owner Ricky Li. “Fine dining in a city like Shenzhen is still at a very early stage of development — a lot of people thought I was crazy to have this vision to create Ensue when we first opened. However, I have learned that if you want to progress and evolve, you must have the courage to do things differently.

Born and raised in Shenzhen, I have travelled extensively worldwide, eating at the finest restaurants, and these experiences inspired me to think more about what I could do for my city. I wanted to contribute and simultaneously change the mentality of Shenzhen’s eating culture. I also wanted to bring in top-quality, world-class food and refined taste to Shenzhen, to show the world audience another side of fine dining in China.” 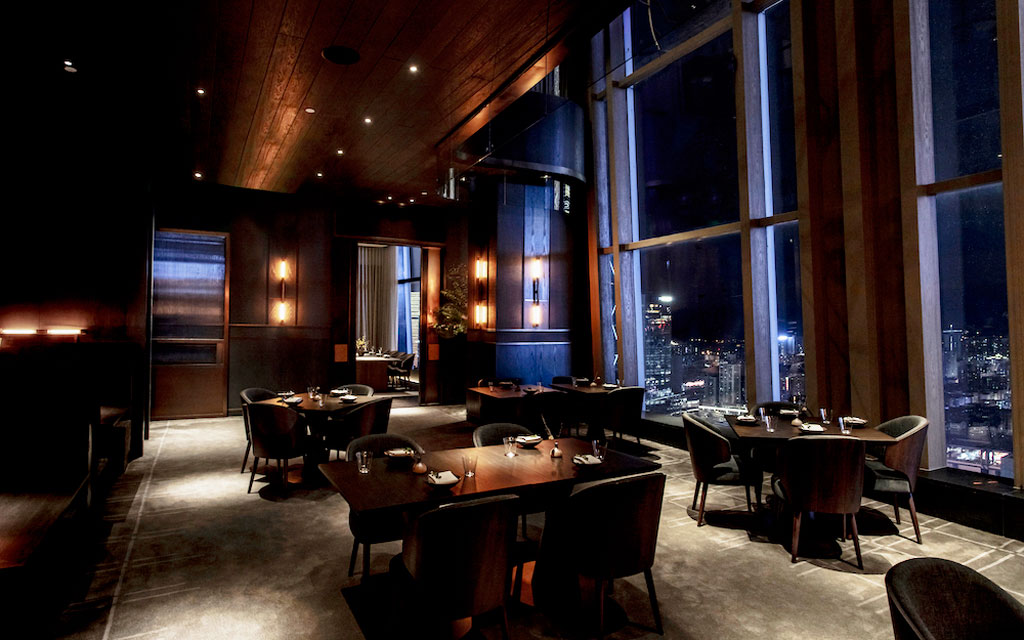 Ensue’s Mission and Ethos
At Ensue, Chef Kostow and Head Chef Miles Pundsack Poe have made it their mission to learn, immerse themselves in, and respect the local tastes and ingredients. As one of the very few leaders within China insisting on and promoting the sustainable food movement, Ensue wants to show that world-class cuisine can be presented respectfully and sustainably. 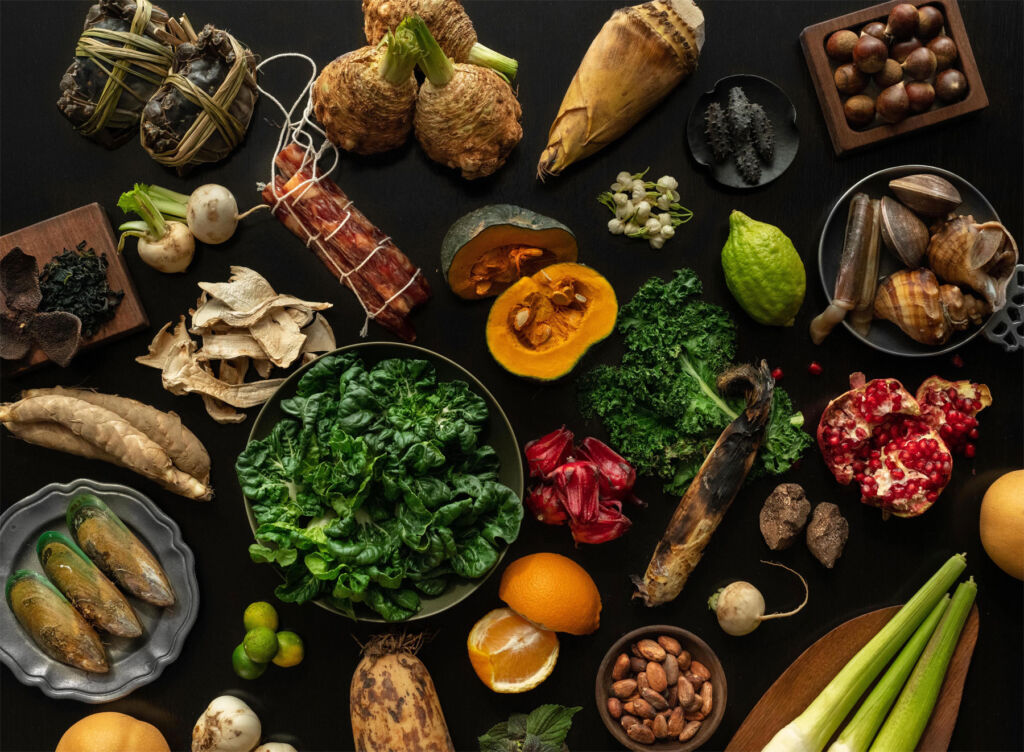 Close to 100% of the produce at Ensue is sourced locally from organic farms, bolstering the belief that China has the same ability as any other great agricultural country to provide the best ingredients to locally produced cuisine. Ensue is proud to seek these very ingredients to support the idea that a single vegetable in its purest form holds enough remarkable flavour that it can become the star of any dish.

The team at Ensue hopes to showcase the beauty and delicacy of each ingredient, using a unique set of world-class cooking techniques that sets it apart from the rest. 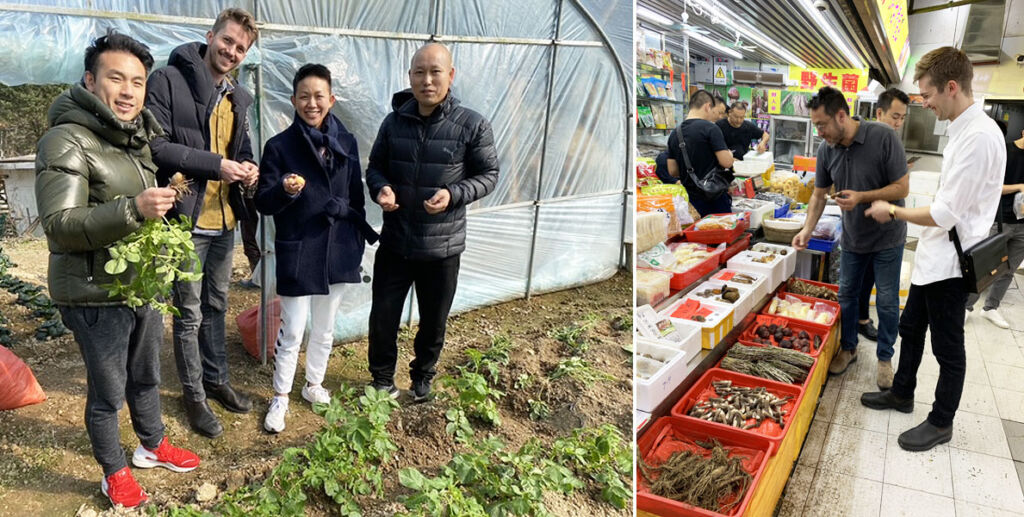 In pursuit of inspiration and knowledge, the kitchen team is constantly travelling to different regions of China to explore the dynamic and abundant local produce that the country has to offer. Their most recent visits include Yunnan, Zhuhai, Zhongshan and Tai Zhou.

“Food is like an umbilical cord that connects nature and people,” says Founder Ricky Li. “Through the ethos and vision of Ensue, I want to nourish their palates, bring awareness to local produce and rebuild this connection between food, nature and people in Shenzhen.” 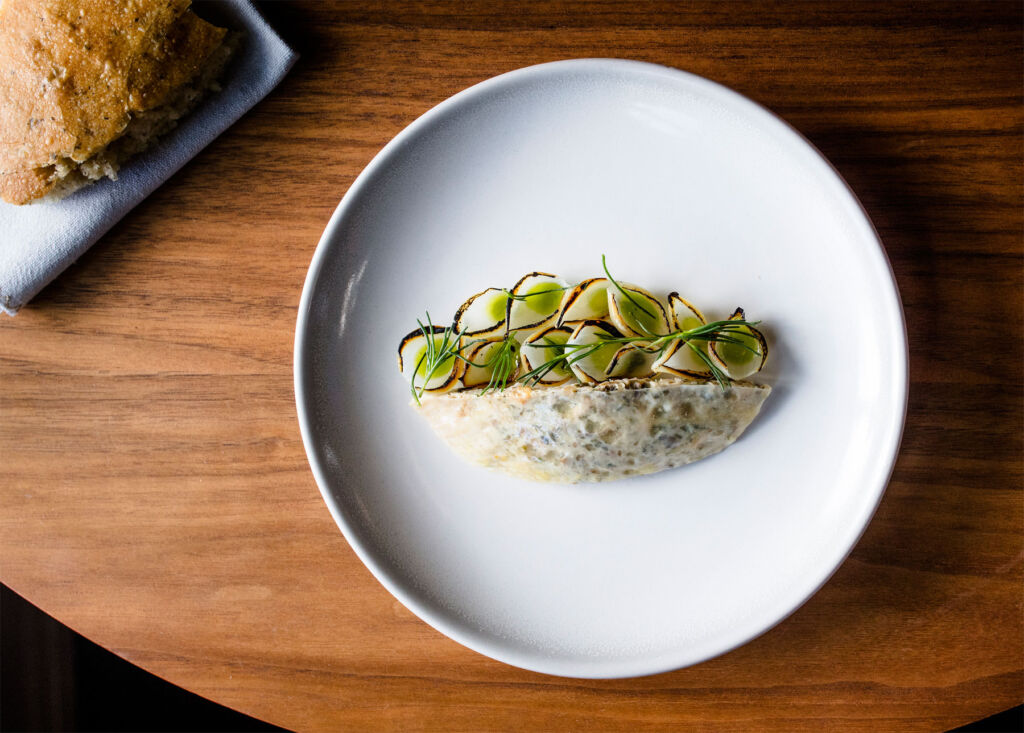 Signature dishes that capture Chef Kostow’s masterful East-meets-West cooking at Ensue includes Chicken Baked in Sourdough (above), a classic dish brought over from The Restaurant at Meadowood that has been elevated with a Chinese spin. Marinated and cured 120-day Qingyuan chicken is wrapped in sourdough bread and baked, resulting in a mouthwatering chicken that retains all its juices. The perfect representation of Ensue, the dish demonstrates the seamless blending of flavours and cooking techniques from California and Shenzhen. 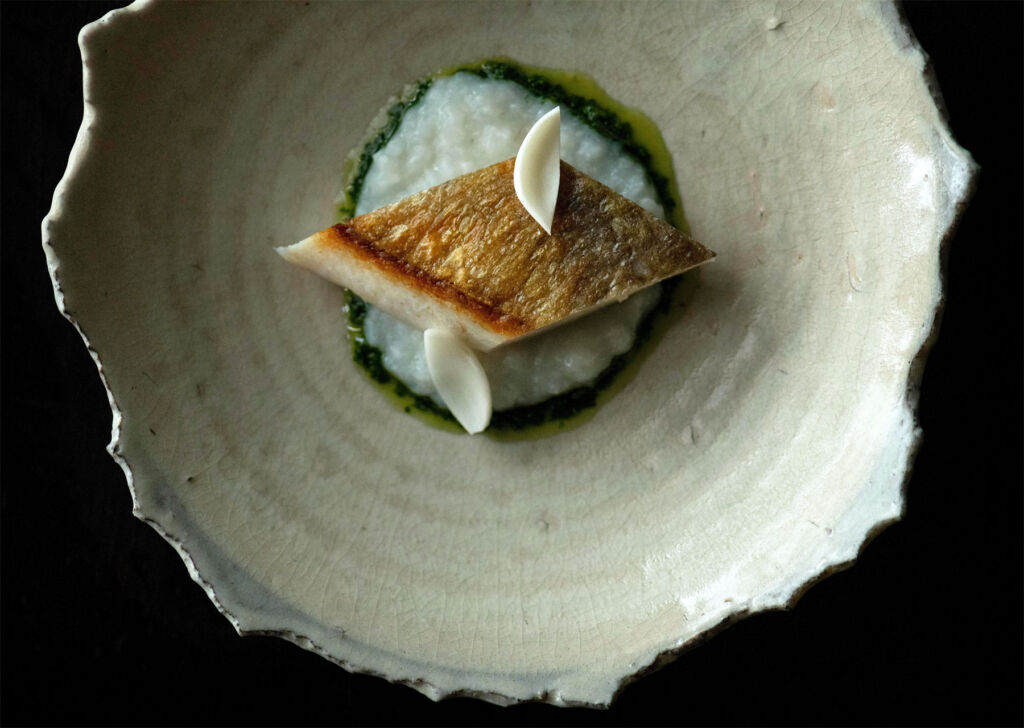 A dish that pays homage to Shenzhen, the Pomfret with Lily Bulb Congee (above) is inspired by the city’s history from over 2,000 years ago during its humble beginnings as a fishing settlement. Typical dishes at the time comprised congee, salty fish, and blanched vegetables, and Chef Kostow decided to create his own rendition of the staple diet.

After researching the local wet market, Chef Kostow decided upon the pomfret fish, a representative ingredient of the Guangdong region. He added 9-year lily bulbs from Gansu to add an extra dimension of sweetness to the congee and replaced the vegetable element with an infusion of pestled herbs from local organic farms. Ever since the dish’s debut on Ensue’s first menu, it has been a crowd-favourite since. 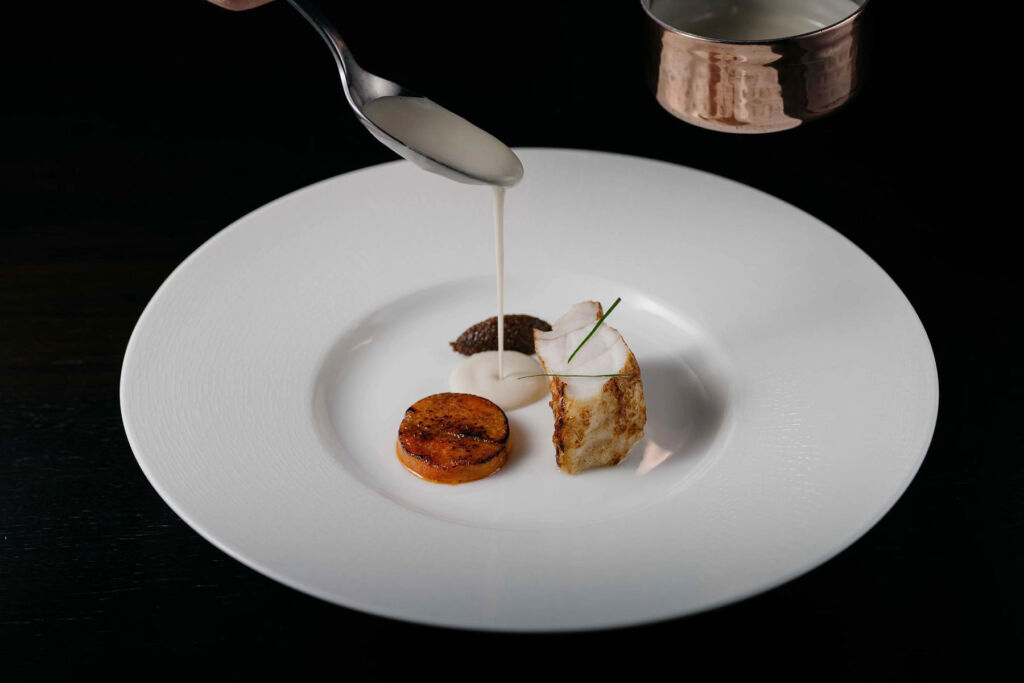 In line with the kitchen’s ethos of sustainability, Ensue’s chefs enjoy the challenge of using or upcycling commonly overlooked or discarded ingredients. Ensue is constantly pushing the boundaries of traditional fine dining and prompting guests to re-think what luxury truly means. One signature dish representing this is the Roasted Monkfish with Liver Torchon, Cashew Milk and Sturgeon Marrow (below). 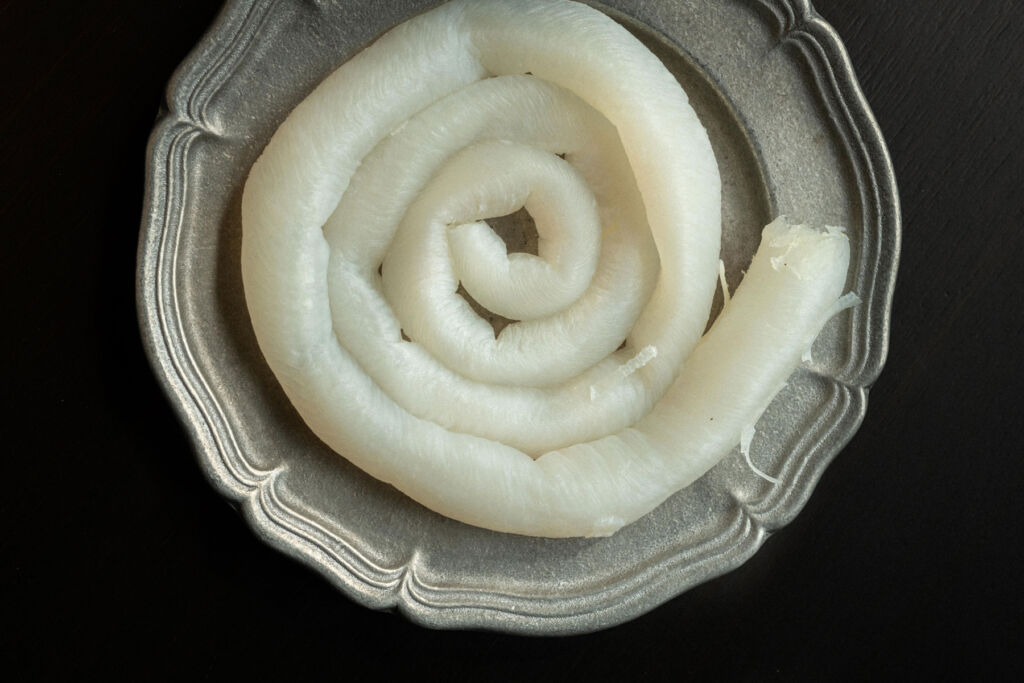 The whole monkfish is used, including typically unfavoured parts– from the liver, tail, and bones for the fumet to the sturgeon marrow for the sauce. The Sturgeon Marrow Jelly with Heirloom Beans and Ossetra Caviar also uses two lesser-known and rarely seen ingredients (sturgeon marrow and heirloom beans) in fine dining menus. 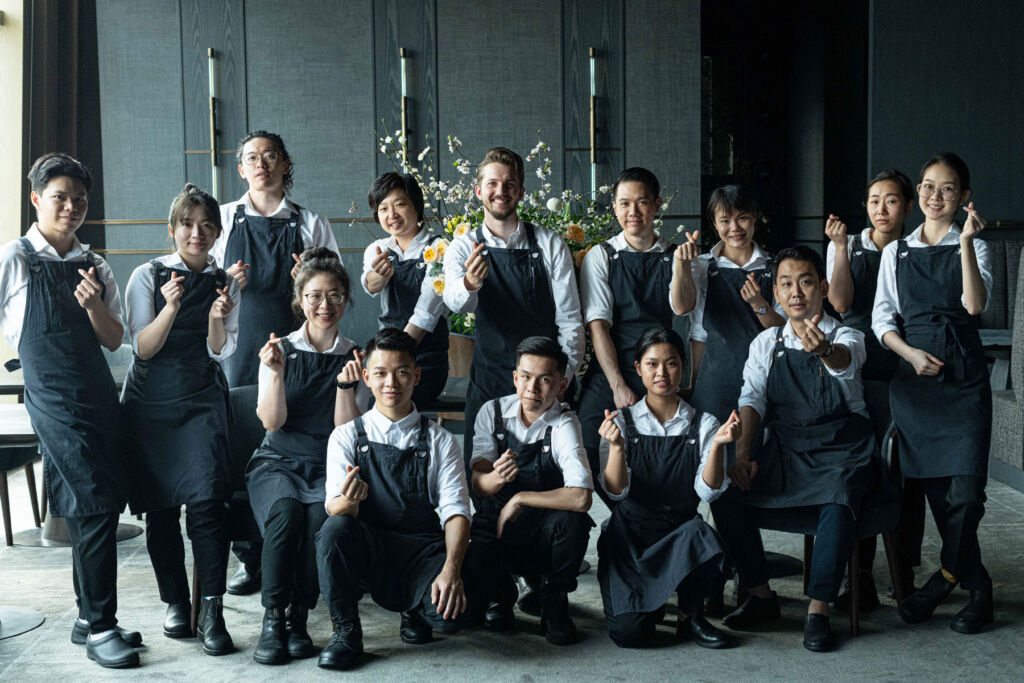 “I am so proud of Chef Miles, Ricky, Laurent, Della, and the entire team at Ensue. It’s been an incredibly challenging year, and their perseverance, commitment to the vision of Ensue, and daily execution have been nothing short of remarkable. I am humbled to be part of this restaurant,” says Executive Chef Christopher Kostow.

What’s Next?
As a fine dining restaurant pioneer in Shenzhen, Ensue will continue to shine a light on Chinese ingredients to the world through events and collaborations. Whilst the city is still at a relatively early stage for the fine-dining culture, Ensue will continue to promote the importance of sustainability, local ingredients, and culture to guests from all corners of the country. Through the power of food, Ensue’s goal is to link the city to nature.