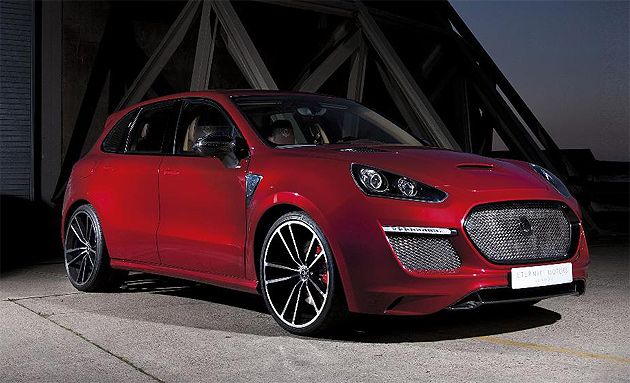 Eterniti Motors, which debuted its Artemis super-SUV at Beijing’s Auto China show which ran until earlier month, recorded its first sales at the event.

London-based Eterniti Motors took five orders at the show, four for standard-specification Artemis super-SUV’s, which are priced in Sterling at £210,000 plus taxes and one for a fully bespoke version, the price of which will depend on the customer’s final specification requirements.

The standard specification offers a handcrafted interior including the finest leathers, veneers including natural woods, piano black and carbon fibre, twin reclining rear seats with heating and cooling, iPad-ready holders with electronic reveal, and a drinks chiller. Outside, the body panels are carbon composite and hand-built, with dedicated 23” super-lightweight forged alloy rims in a variety of styles. The 4.8-litre twin-turbo V8 engine produces over 600bhp (441kW) and 750Nm (553 lb ft) torque, and can accelerate from 0-100kph in 4.5 secs and exceed 290kph.

All five buyers are based in China, where the demand for luxury SUVs is growing rapidly and customers are seeking more luxury, rear passenger space, personalisation and performance in a single package. However, at Beijing there were also serious expressions of interest from customers based in Italy, Spain, the USA and Australia.

Eterniti is aiming for sales of only 30-40 Artemis super-SUV cars this year so is already on target.

Deliveries of the first customer cars are scheduled for this autumn.

“We were really pleased with the response, especially as the cars displayed in Beijing were running prototypes rather than dedicated show cars, and the quality and detailing will be far superior in full production,” says Global Sales Director Marcus Kenny.

“The reaction was almost exclusively positive,” he adds. “The Artemis was accepted as the most luxurious SUV yet available, and Asian customers were delighted with the twin rear pilot seats and legroom, which means that they can both be chauffeured and drive the car for fun. In addition the price in China is very competitive, representing a premium of only around 30% over the country’s best-selling luxury SUV, the Porsche Cayenne, equipped to the maximum specification available, and of course that’s without the many unique features we offer.”

Dealer reaction was also very positive, with enquiries coming from not only China, where Eterniti Motors will form its first retail partnerships, but also the Middle East, USA and Russia.