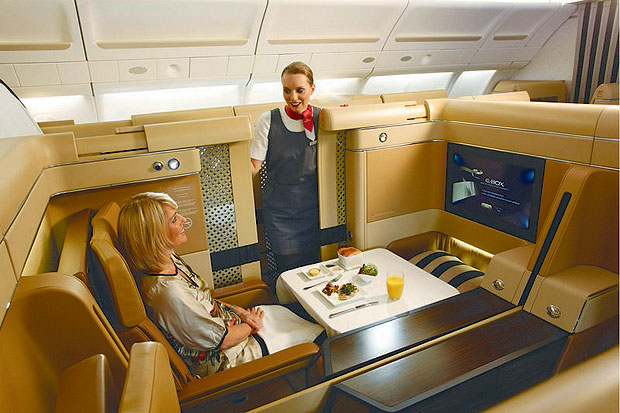 Etihad Airways, the national airline of the United Arab Emirates, has announced plans to increase flights between Brisbane and Abu Dhabi from three times a week to a daily service from February 1, 2013.

This will bring to 28 the total number of flights Etihad Airways operates between Australia and Abu Dhabi, together with partner airline Virgin Australia.

The additional four services will continue to operate via Singapore in both directions and provide a new daily link between the city pairs.

James Hogan, President and Chief Executive Officer of Etihad Airways, said the increase in frequency was a game-changing move for the airline on the Abu Dhabi-Singapore-Australia route.

“Going daily to Brisbane and Singapore puts Etihad Airways in a stronger competitive position and will increase the airline’s brand footprint exponentially in these markets. We are now able to offer corporate and leisure travellers a more appealing proposition: more flights, more convenience, improved connections and a wider choice of destinations in Europe, the Middle East, Gulf Cooperation Countries, and on the Virgin Australia domestic network. These extra flights to Brisbane and Singapore underscore the strategic importance of Australia and the Asia Pacific region and the contribution each makes to the airline’s goal of sustainable profitability. We look forward to working with our partners in government and industry to increase business and leisure tourism and to cement the route’s enduring success.”

Queensland Premier Campbell Newman said Etihad’s plan to increase the number of flights was a boost to Queensland’s economy and the tourism industry.

“This will see thousands of extra people a year coming into Queensland, injecting millions of dollars into our economy and resulting in more jobs being created,” said Mr Newman. More flights into the state opens up opportunities for international travellers to see some of the many wonderful tourist attractions Queensland has to offer.”

Etihad Airways commenced thrice weekly flights to Brisbane and Singapore on September 28, 2007. The Queensland capital was the airline’s second destination in Australia and the 43rd in its global network..

It operates an Airbus A330-200 aircraft on the Abu Dhabi-Singapore-Brisbane route. The aircraft is configured in two classes with 22 seats in Pearl Business Class and 240 seats in Coral Economy Class.

The Abu Dhabi-headquartered airline has strong ties with the Queensland Government and its agency, Tourism Queensland. It has supported major marketing initiatives such as the Million Dollar Memo, and in 2011 donated $1 million to the Queensland Flood Appeal. Its shareholder, the Emirate of Abu Dhabi, also donated $30 million to the Government of Queensland to build five category five cyclone shelters for use as multi-purpose centres year round.

Etihad Airways has access to a total of 42 flights per week to Australia, 35 to direct gateways and seven via or on to regional hub. It currently employs more than 100 staff in Brisbane, Sydney and Melbourne and maintains seven premises, including two dedicated aircraft maintenance facilities at Sydney and Melbourne airports. The airline employs a total of 56 Singaporean nationals across its global network. This number includes seven pilots and 27 cabin crew.