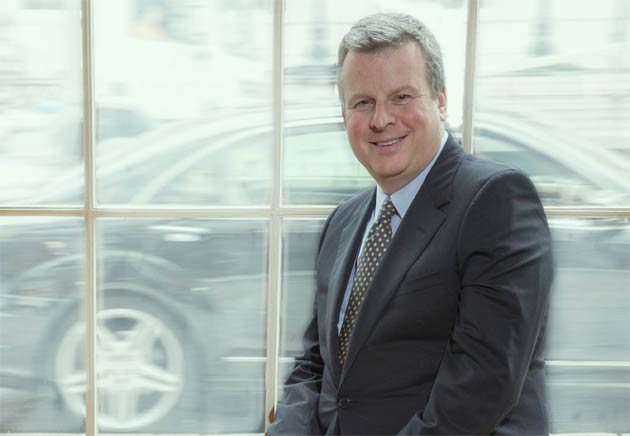 Joel Kissin, who alongside Sir Terence Conran was credited with changing the face of the London restaurant scene, is to introduce this legendary name to a new generation when he opens Boulestin in September 2013. To be located in London’s St James’s, where The Crown Estate is spearheading a  revival of this historic corner of the West End, the new Boulestin will comprise a luxury 60-seat bistro, serving mostly classic French food, a private dining room seating 36 and Café Marcel, a 30-seat casual dining space offering lighter fare. We caught up with Joel to find out more.

LM: The Boulestin name is back in London after an absence of nearly 20 years. What is the meaning behind the name and what genre of cuisine will you be serving?

JK: The restaurant is named after Marcel Boulestin who opened his eponymous restaurant in Covent Garden in 1927. He also was a highly successful cookbook author and the world’s first TV chef between 1937 to 1939. The cuisine will be French, with a strong focus on the classics, I want the food to reflect the simple robustness of Boulestin’s original vision.  With regards to the service, I hope to have a backbone of strong professionalism together with a charming and friendly attitude.

LM: What type of customer are you targeting primarily and what will Boulestin offer them over other dining venues in the area?

JK: I wanted to ensure that Boulestin is not targeted to a specific audience. It was my ambition to create a restaurant that appeals to a wide range of people – from the business community to the more casual dining set. It is also important that the cuisine and atmosphere appeals to both men and women.

LM: Why was St James’ Street chosen as a location for the new eatery as Mayfair is a relatively crowded marketplace when it comes to high-end restaurants?

JK: I think that St James’ is a fantastic location that is going through a makeover at present. Mayfair is relatively crowded and I hope that Boulestin will add to the revival of the prestigious St James location.

LM: What does Mayfair provide over other affluent areas in the Capital?

JK: Mayfair/ St James’s has always had a great buzz about it – whether it be the after work crowd or during the weekend, it attracts so many people who just want to indulge and have some fun. St James’ in particular will be a big pull, and can hopefully provide an alternative to those establishments already in place.

LM: How do you see the luxury hospitality market evolving in the coming 12 months?

JK: I think that it is only going to expand further – I’ve been in the industry for many years and truly believe that this is an exciting time in this business. There are so many new openings happening all over London and it’s great to be a part of that again.

LM: What are the keys to success in providing clients with a memorable dining experience?

JK: I think that every restaurateur has their own vision in mind when creating an establishment for people to relax and enjoy themselves in. Personally for me – I want to create something that is classic, where people can feel comfortable and come away with a sense that their money was well spent; repeat bookings are always a good indicator.

LM: And about you Joel, what are your career highlights to date?

LM: Are there any specific personalities who have inspired you?

JK: Anders Ousback – an Australian wine man and restaurateur, whose knowledge, taste and energy were a great inspiration, Simon Hopkinson, who is one of the great natural cooks of his generation, of course Sir Terence Conran, who gave me such great opportunities and who taught me so much; although I learnt a lot about design from him, one of the other things he taught me was to not always believe what you are told – if someone says something is impossible it usually isn’t.  And finally Carlos Afonso, my partner of over 20 years has taught me so much through his inspired eye for design, together with meticulous research. He has the best visual memory I have ever encountered – so much so that he will recall design details from years ago.

LM: What are your biggest luxuries in life, and are you a collector of any artefacts big or small such as cars, watches or antiques?

JK: I have owned so many wonderful things, furniture by Jean-Michel Frank, Dupre-Lafon, Charlotte Perrand, Andre Arbus, Jean Prouve and Kaare Kindt.  I am very keen on Arts and Crafts and Wiener Werkstatte furniture and objects. Ceramics and pottery by Pierre-Adrian Dalpayrat, Theodore Deck, George Jouves, Axel Salto and Picasso. And Line Vautrin resin and glass mirrors – I have two very decorative ones probably from the 1950’s.  I had, until fairly recently, a wonderful Andy Warhol oil “Mao”.  I also have some Picassos, a Claus Oldenburg and a Cy Twombley. I am also a collector of works by American artist Donald Baechler, who is best known for his bold large paintings of flowers – I have three of his large oil paintings.  As regards clothes, I love Loro Piana and have quite a lot of their clothes, including two amazing cashmere coats.  I am also a Hermes aficionado, my favourite shoes are by Tods and toiletries by Malin and Goetz. I used to own a beautiful 1928 jump-hour Cartier watch that I foolishly sold. I am also very partial to Rolex’s.  I have sterling silver cutlery by Bernadotte for Georg Jensen and I also have a large set of 19th century German sterling silver cutlery that used to be owned by various Prussian emperors.

LM: If money was no object, what would you buy? Have you made any extravagant purchases in recent years?

JK: If money was no object, I would buy more art by Warhol, Picasso, Cy Twombley and Francis Bacon in addition to photographs by Hiroshi Sugimoto, Thomas Struth and Shirin Neshat.  If I were to collect cars then of course Ferrari, Lamborghini, Bentley and Rolls-Royce with a team of chauffeurs for the latter! I like Audis and I’ve also always liked the vintage Alvis.

I am not a big drinker, but if I was, I would consume more fine old wines; many years ago I used to go to a friend’s barking dinner parties. He lived in a beautiful and grand house in Cheyne Walk and had the finest cellar in London and we drank the finest wines – Bordeaux from the early 20th Century though to the early 1960’s, 1950’s white Burgundy, 19th century red Burgundy, 19th century Chateau d’Yquem and 1950’s Champagne.  It was unforgettable.

I recently purchased two beautiful and expensive Charlotte Perriand tables, some Axel Salto pottery and a restaurant in St James’s!  We also bought a second house in Sintra in Portugal which we are currently renovating.

LM: Thank you for your time Joel and we wish you all the best with Boulestin.