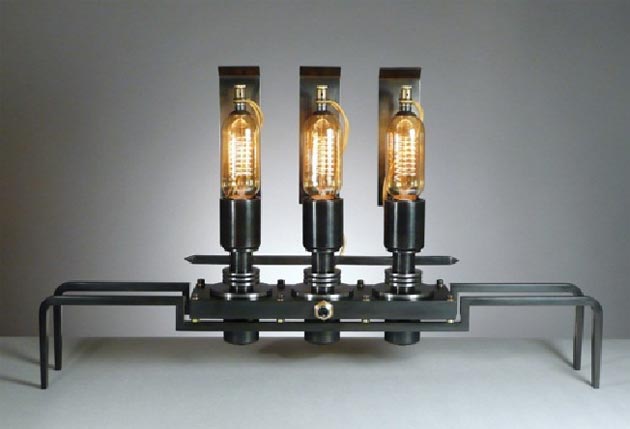 The Frank Buchwald Machine Lights are a series of 12 majestic lamps crafted entirely by hand and boasting an almost anatomical form thanks to their alien-like, quadrupedal bases and quasi-corporeal symmetry.

Talking about his creations, Frank Buchwald explains, “The attentive observer will not fail to notice that the Machine Lights live from a source other than from the hand of man. Although I have worked for over ten years on them, I don’t really regard them as my own work: they are beings in their own nature.”

Each lamp is made with more than 200 individual components in an intricate combination where burnished blackened steel throws into sharp relief the rich patina of brass and the warm, yellow glow of visible light filaments. Each brass component is meticulously hand-polished, while the steel is repeatedly hand-burnished with chemicals to achieve an impressive silky black oxidation.

Frank spends nearly all his waking hours working on the Machine Lights – designing, sourcing the materials and then crafting them – such that these lamps have become his life and his livelihood. Due to the time-intensive nature of his work, from his 12 designs, Frank only crafts ten lamps each year in his Berlin atelier.

Maximilian Büsser, founder of the M.A.D. Gallery, has been fortunate to visit Frank and witness him at work. “It was a fascinating experience,” says Büsser. “Frank is incredible, as is his workshop – it is full of metal bars and blocks of metal. He designs, machines, assembles and finishes everything himself. It is really a way of life for him.”

Büsser adds, “Frank Buchwald’s Machine Lights typify the mechanico-artistic excellence which forms the cornerstone of the MAD Gallery. Frank creates machines that give light, not to give light, where his craft transcends a practical purpose and his creations well and truly assume the status of artworks.”

Berlin-based Frank Buchwald was born in Hannover, Germany in 1956. After studying design at the University of Arts in Berlin, Frank worked as a freelance artist and science-fiction illustrator until 1993 when he turned his attention to designing and manufacturing metallic furniture.

He created all manner of metal furniture until about a decade ago when he started to focus his efforts on making lamps. It took Frank many years before he felt that the designs of his sculptural lights were moving in the right direction, and an even longer time until he could say he was completely satisfied.

“The individual lamp models were not designed spontaneously in a moment of inspiration,” he says. “It was rather a long groping for a hard-to-comprehend, meaningful form.”

“I have the feeling that the Machine Lights now portray what I imagine them to,” he says. “I think that they have now reached the right level of completeness and perfection.”

The Frank Buchwald Machine Lights are the astounding results of his endeavours.