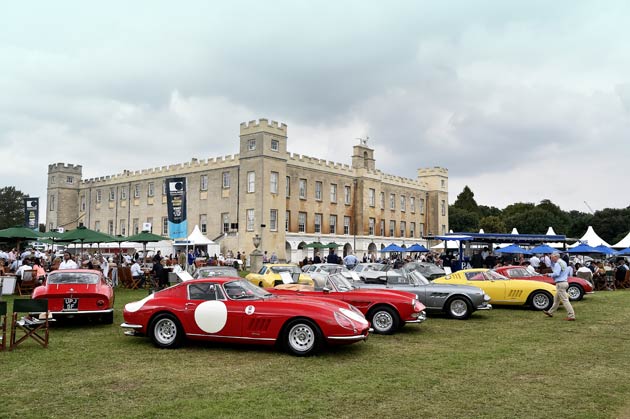 The 9th Salon Prive Concours D’Elegance and British Supercar Show returned to London’s Syon Park in September, bigger and better than before. 2,335 bottles of Champagne and 4,500 scones were on order, 419 ladies were expected for Boodles Ladies Day and the historic cars on show were estimated to be worth £ 120,000,000. 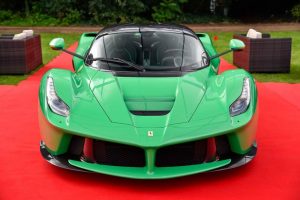 Taking centre stage on the red carpet on the hyper car lawn was Ferrari’s LaFerrari. Belonging to Jay Kay, Jamiroquai’s frontman, this bright green LaFerrari was judged by many to be one of the highlights of this year’s salon. The 950bhp hybrid V12 car, a limited series special of just 499, is an extraordinary car and technological marvel with integrated dynamic control, active aerodynamics and the HY-KERS system which will filter down into Ferrari’s production models. Jay Kay’s model bearing his personal plate ’22 JET’ was on show in the hypercar paddock together with a Pagani Huayra, Koenigsegg Agera R and Bugatti Veyron.

The LaFerrari is Ferrari’s attempt to build the world’s best sports car, being the fastest and most advanced Ferrari ever produced and going head to head with the McLaren P1 and the Porsche 918 Spyder.

It was launched at the Geneva Motor Show in 2013 and all 499 had sold before the end of 2013. Perhaps they kept one for the factory museum.

LaFerrari is full of F1 technology and £1M will give the lucky owners one of the most capable road cars ever. The mid-mounted 6.3 litre V12 engine is electrically assisted by Ferrari’s HY-KERS system to deliver a total power output of 950bhp, giving a rumoured top speed of 227mph and it will go past 62mph in less than three seconds. 0 to 124mph takes under seven seconds, five seconds faster than the Ferrari Enzo. 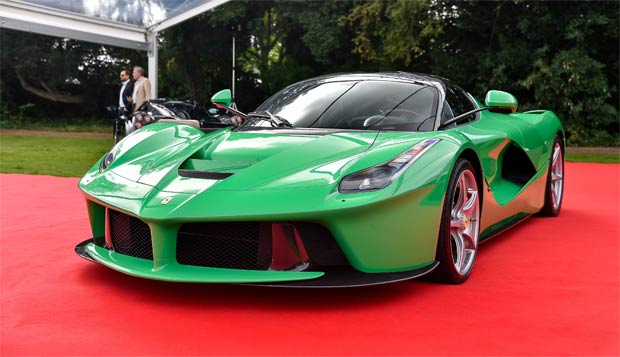 The 789bhp version of the F12’s 6.3 litre V12 works with a 161bhp electric motor to drive the rear axle. This gives enormous power on tap, in any gear, at any speed. This power is handled by an F1 dual-clutch gearbox. A lithium-ion battery pack under the floor pan gives the car a 35mm lower centre of gravity than the Enzo. The battery is charged when braking and whenever the V12 produces more torque than required. The battery supplies power to the electric motor and this hybrid system means that the LaFerrari emits just 330g/km of CO2, a low figure for the power available.

The LaFerrari has an advanced carbon fibre tub construction, active aerodynamics, including a flexible front diffuser, underbody vanes and an active rear spoiler and diffuser. This removes the need for a rear wing and the movable parts allow downforce to be maximised or drag reduced as needed. This design has been developed in the F1 team’s wind tunnel and features design details such as the single strut pointed nose borrowed from current F1 cars. 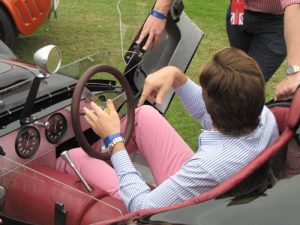 The steering wheel carries all of the major controls in another F1 reference and the seats which are an integral part of the carbon fibre tub will be sculpted to suit each individual driver. With the potential to adjust the pedal positions the car offers a bespoke driving experience.

Bespoke or custom-made seemed to be a theme of Salon Prive this year with other tailored offerings from Warr’s Harley Davidsons and George Lister Engineering.

Lister is a name perhaps better known for diesel engines, but another family member George Lister founded the historic Lister Motor Company 60 years ago. They are building 10 continuation Lister ‘Knobbly’ Jaguars to celebrate this milestone. The first of these was proudly displayed on the supercar lawn. I was told that they will also make bespoke variations of this raw repro racing car. 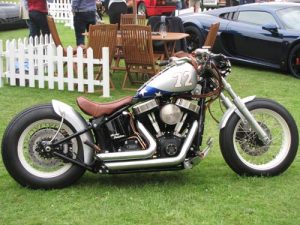 Bespoke is the rule at Warr’s, Europe’s oldest Harley-Davidson dealer, where Charlie Stockwell has been designing and making fantastic bespoke Harleys for sixteen years. His latest creations for celebrities and buyers from the Gulf were on show and feature quirky, retro styling details such as blanket rolls that might look more at home in a Western, copper finished components and fantastic leather accessories such as pannier bags and brake cable covers, all finished with immaculate contrasting stitching. Never having got into motorbikes, these were the first motorbikes I have ever been excited by.

See more of Salon Prive 2014 by clicking the images below