F P Journe will be exhibiting the Steel Time Collection – The largest historic collection of gunmetal watches from mid to late 19th Century From 21 April to 15 September 2012.

After Geneva and Tokyo, the renewed Forbes Galleries in New York at 62 Fifth Avenue will host the exhibition Steel Time, featuring the largest historic collection of gunmetal watches – burnished steel – a remarkable display of 200 watches made between 1850 and 1910. Each piece is unique in a variety of styles and techniques, but all have echoed in the wristwatches produced today. The industry of laminated iron was one of the greatest adventures of the 19th century. Produced in large quantities as of 1845, the material was used in railways, bridges and towers. As the price of steel fell, it replaced iron in most industrial applications and it made a dramatic entrance with the construction of the Brooklyn Bridge in 1885, and the building of the Eiffel Tower in 1889. The metal thus became familiar to the general population, and widely accepted. The fashion spread to all walks of life, and not the least horology. 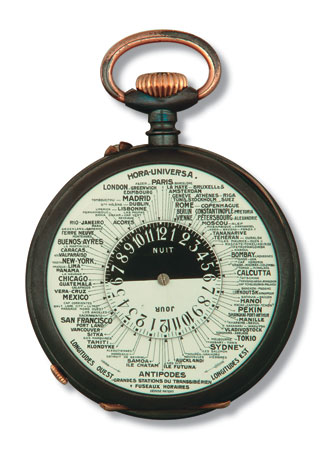 Gun metal watches developed shortly after the war of 1870 and painted a captivating picture of a new type of watch that was both egalitarian and fun! There was a considerable price difference between steel watches and those in gold, which gave steel watches the possibility to circulate freely without being subject to heavy taxation. The watch thus became generalised to all classes of society and led to the birth of the proletarian watch. This production was also greatly encouraged by the growth of the French metal industry, which resulted in the development of new methods of production and treatment of steel.

Numerous styles were designed in gun metal watches, sometimes with a plain case, sometimes adorned with two gilt metals applied on the bezel and to the edge of the case back. The dials could be in white or colored enamel, simply marked with the word Regulateur, or embellished with numbers painted on round flinqué enamel cartouches of various colors, and often depicted a locomotive, a ship or a car. Depending on the price, some offered a more complicated movement, with chronograph, alarm setting or striking mechanism, and others could offer world- time indications. In creative hands, steel did much to popularize watches.

For many years, François-Paul Journe, a passionate and knowledgeable collector brought together this collection of singular gun-metal timepieces. He is the privileged guardian of this historical heritage and is proud to share this unique collection with the American public at The Forbes Galleries. The NAWCC (National Watch and Clock Museum) in Columbia, PA, is supporting this exhibition.

This magnificent collection was previously exhibited in the salon of F.P.Journe’s Manufacture in Switzerland and at the Embassy of Switzerland in Tokyo. It leaves the visitor with countless thoughts about the measurement of time and its evolution. It also helps understand why contemporary watchmakers like F.P.Journe continue to develop watch making as a science.

“STEEL TIME” the book, is published by F P Journe 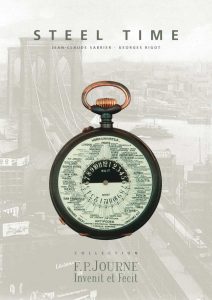 F.P.Journe keeps this exhibition alive through a book entitled Steel Time, written by two outstanding experts, Jean Claude Sabrier and Georges Rigot. More than 300 fascinating pages cover the origin of these creations, sometimes going back to the 17th century. One seldom sees such a vivid and complete approach to quality watchmaking in precious-metal watches. The preface, by François-Paul Journe, introduces the only steel watch in the F.P Journe -Invenit et Fecit- collection. Only a steel case can give the Sonnerie Souveraine chiming watch its crystal-clear sound. Otherwise the brand only uses platinum or gold for its precious and elegant cases and 18K rose gold for all its movements.

The Limited English Edition signed by F.P.Journe will be available for sale at US$ 250.- at the Boutique F.P.Journe, 721 Madison Avenue, 10016 New York