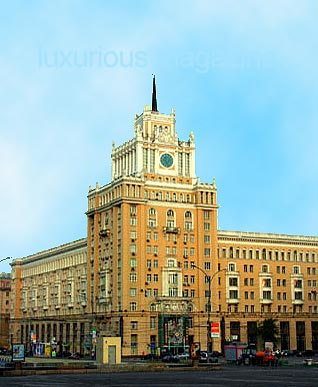 Fairmont Hotels & Resorts, which operates some of the world’s most storied and luxurious hotel properties such as The Plaza in New York, London’s The Savoy, Fairmont Peace Hotel Shanghai and Fairmont San Francisco, will soon welcome another notable icon, the Fairmont Pekin Moscow Hotel, to its collection.  Following an extensive multiyear restoration program, this historic property will officially be known as the Fairmont Pekin Moscow.

The project is being developed by HALS-Development, a prominent real estate development company in Russia.

Location of the Fairmont Pekin Moscow

Fairmont Pekin Moscow will be centrally located in the city, at the junction of the Garden Ring and Triumfalnaya Square.  Opposite, is the Mayakovsky Monument and metro station, while the Tchaikovsky Concert Hall, Satire Theater and Red Square are situated nearby.  The hotel will feature 236 spacious guestrooms and suites, including Fairmont Gold, the brand’s exclusive room product that offers guests personalized service, a variety of amenities and the relaxed comfort of a residential-style lounge.  Guests will also enjoy a selection of dining venues, 950 square meters of meeting and function space as well as a Fairmont branded spa and fitness facilities.

Completed in 1955 to designs by Dimity Chechulin, one of the Soviet Union’s most famous architects, the Pekin Hotel was part of the post-war redevelopment of Moscow. Chechulin, a former City Planner, also built Moscow’s White House, four of the renowned Metro Stations and one of the Seven Sister buildings.

“We are fortunate to count some of the most iconic hotels in the world amongst our portfolio and we take our role as custodians of these great properties very seriously,” said Chris Cahill, President, Fairmont Hotels & Resorts. “This project not only affords us the opportunity to offer our guests a new, key destination in the largest country in the world but allows us to partner with HALS Development, which in addition to being a highly regarded property developer also shares our sensibility for heritage and preservation.”