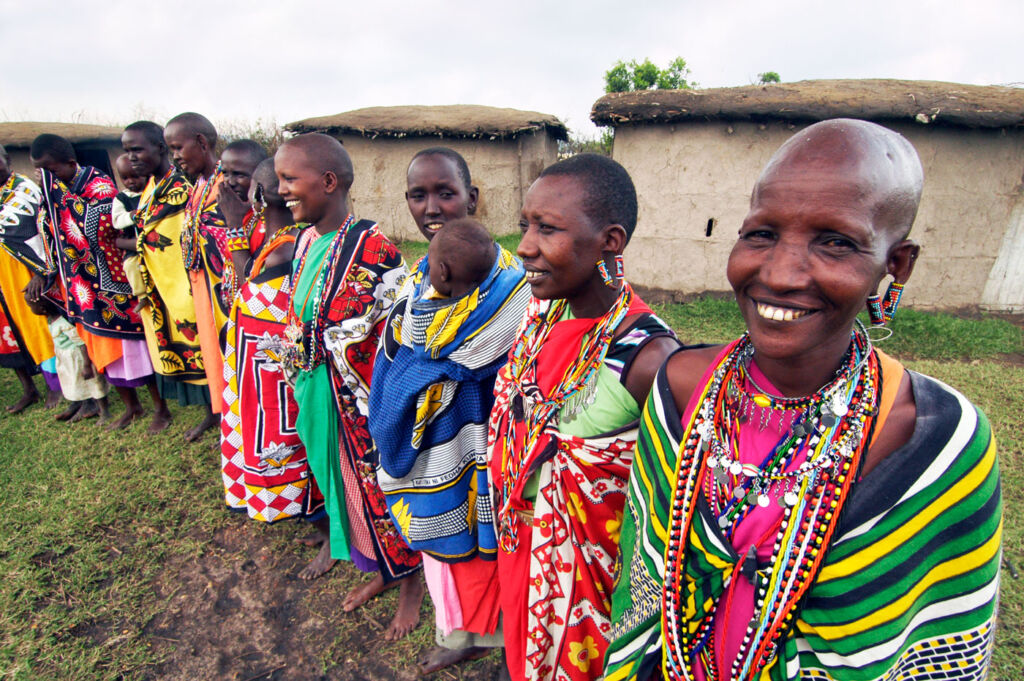 Continuing her quest to uncover the finest vacation destinations in Africa, Gina Baksa visits the Masaai Mara for a memorable stay at the Fairmont Mara Safari Club.

Vast yellow-green savannah below, bright blue skies above, we’ve taken off from Nanyuki on the slopes of Mt Kenya on our way south-west, across the Aberdare National Park and Mau Forest to the Maasai Mara National Reserve, near the border with Tanzania. Just 60 minutes later we’re touching down on the bumpy grass airstrip at Ngerende in the Mara.

Ancestral homelands to the Maasai tribespeople (‘mara’ is Maasai for spotted), the landscape here is a mix of trees, scrub and savannah. Replete with the Big 5, the most popular visiting season is during the annual Great Migration between July and October, where wildebeest, zebra and Thomson’s’ gazelles running the gauntlet of Nile crocodiles in the Mara River to reach the fertile grasslands in Kenya. 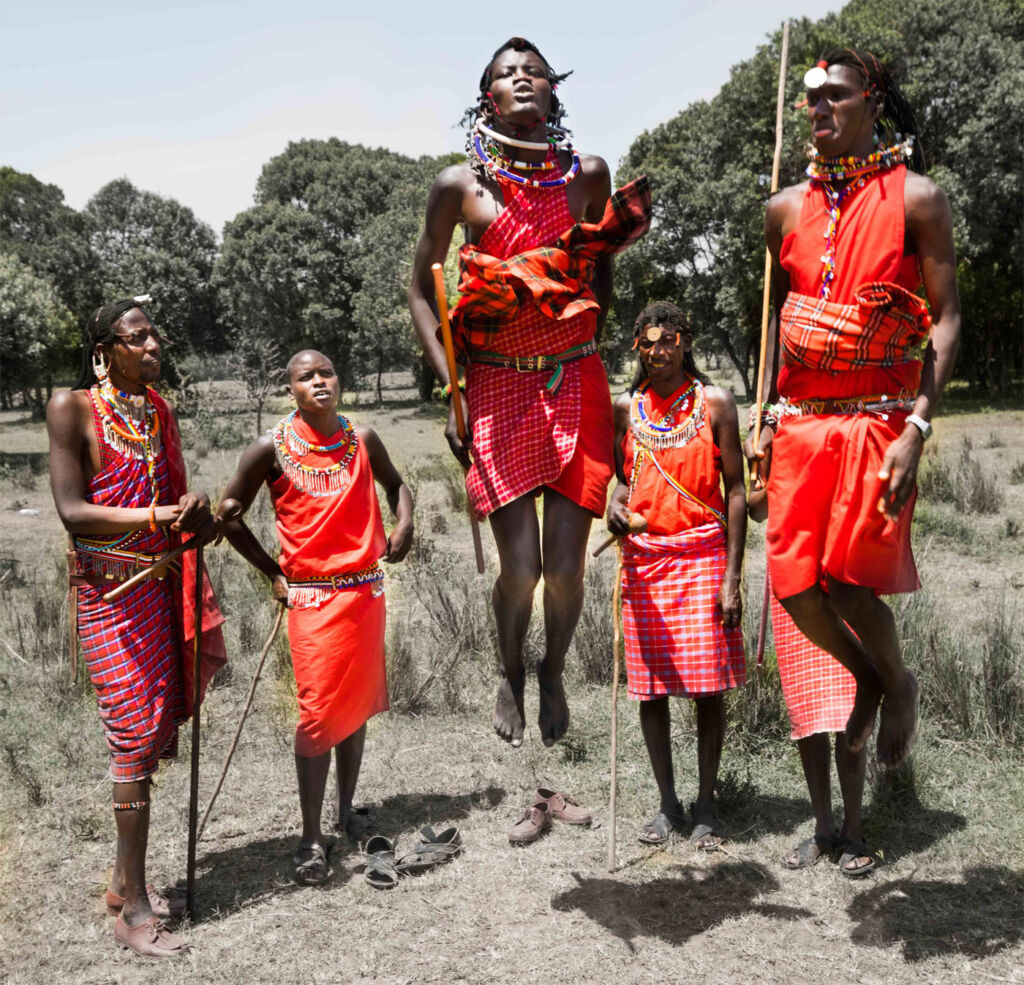 A group of lithe Maasai tribesmen meet us off the plane, and I am escorted hand-in-hand to a clearing where I attempt to join them in their spectacular jumping. These energetic dancers in their bright red shukas (the colour apparently scares lions) adorned with beautiful necklaces and jewellery are breathtaking.

The Fairmont Mara Safari Club enjoys a privileged location on the banks of the Mara River in the north-western corner of the Maasai Mara Game Reserve. Surrounded on three sides by the hippo and croc-filled river, this is luxury glamping. 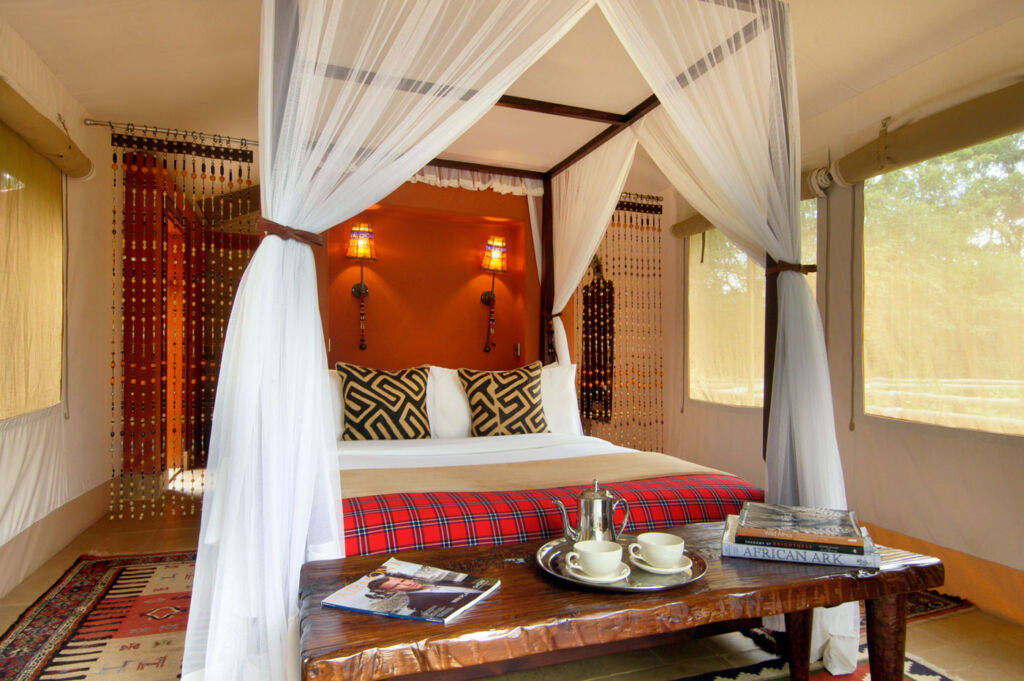 My spacious tent is fully powered, with king-size four-poster bed, shower, coffee-maker and ample wardrobe space. Decorated with beadwork and tribal art, there’s a relaxing outside deck for watching the hippo and crocodile action in the river below. Some tents have their own private dining space – choose Number 46 for that heavenly experience – it enjoys superb views of the Mara River and is discreetly sited away from other guests. 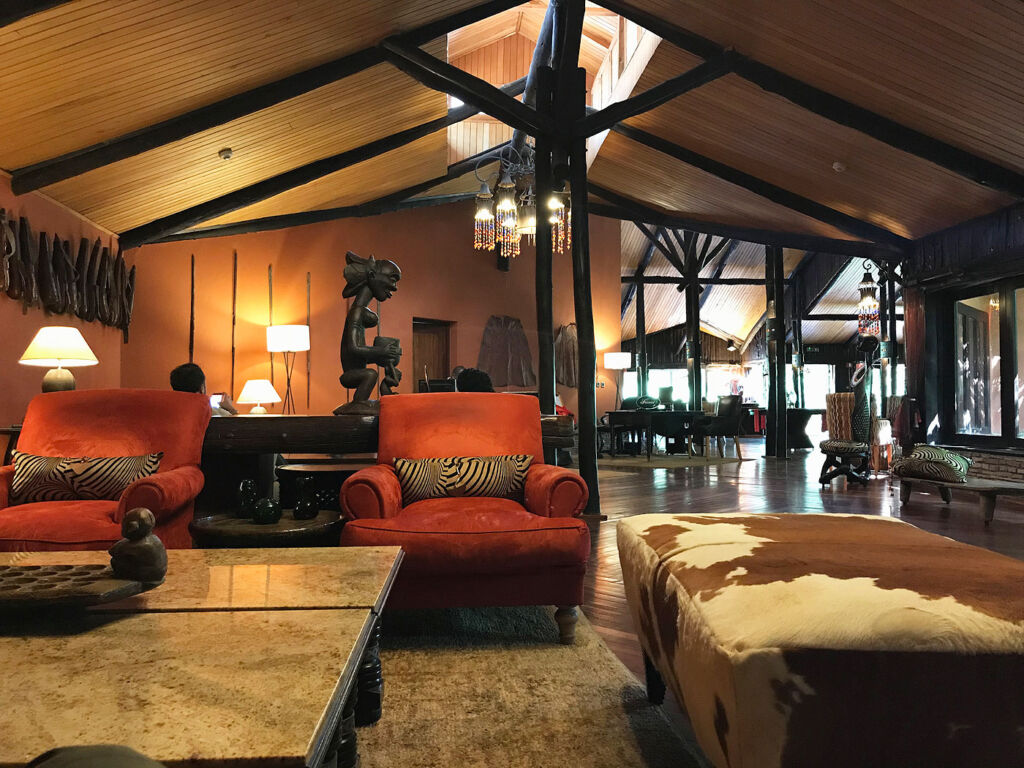 The main lodge at the Fairmont Maasai Mara Safari Club has a beautifully cool, spacious lounge and reception area, with comfy sofas, an inviting fireplace, tribal art and a rustic use of glass and local mahogany. There’s a library here and computer room and it’s a welcoming, light-filled space. Wi-Fi is only available at reception, which makes digital detox so much easier. 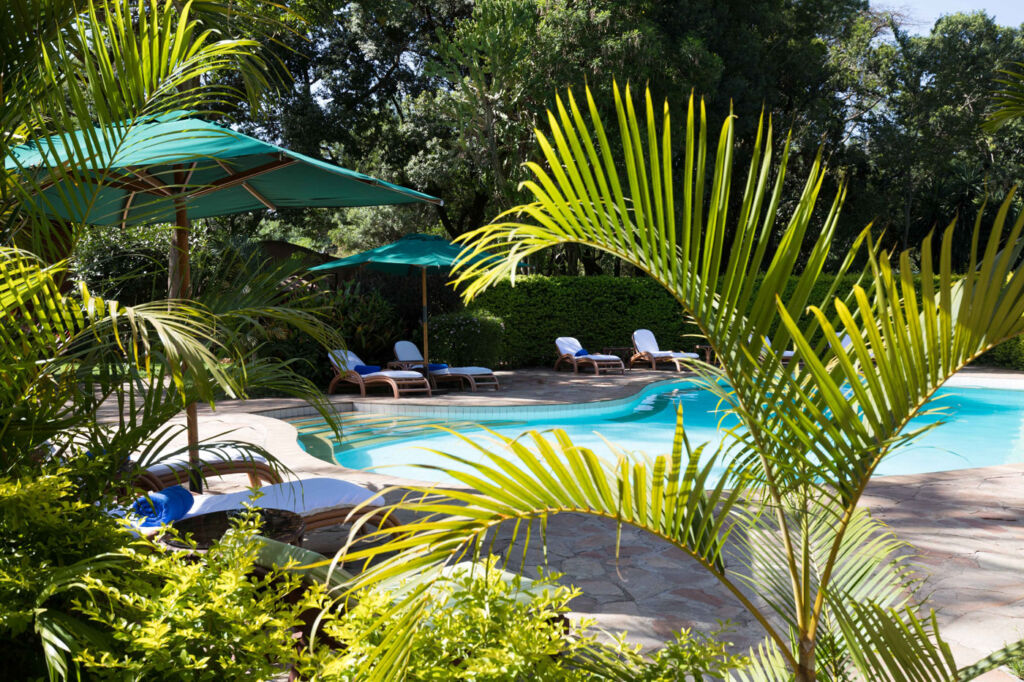 The inviting outdoor pool near the main restaurant provided a welcome cool-down before lunch. It’s also near the massage rooms where I enjoyed a superb reflexology treatment the following day with therapist Liz.

Osotua – the main restaurant – has extensive indoor and outdoor seating on a deck overlooking the river. Food is buffet-style with a generous selection of salads, pasta, meat and fish dishes. We ate only locally sourced organic food together with veggies from the Safari Club’s own organic garden. They also cultivate the most succulent chillies.

Our first game drive is at 3 pm and I’m beyond excited. Led by Henry, our brilliant driver and guide we head out of camp into the lush savannah. It’s much greener than I’d expected. Zebra are abundant here, eating the tips and stems of the tall grass and so exposing the lower leaves for the wildebeest, who in turn prepare the protein-rich shoots and herbs for the Thomson’s gazelles. 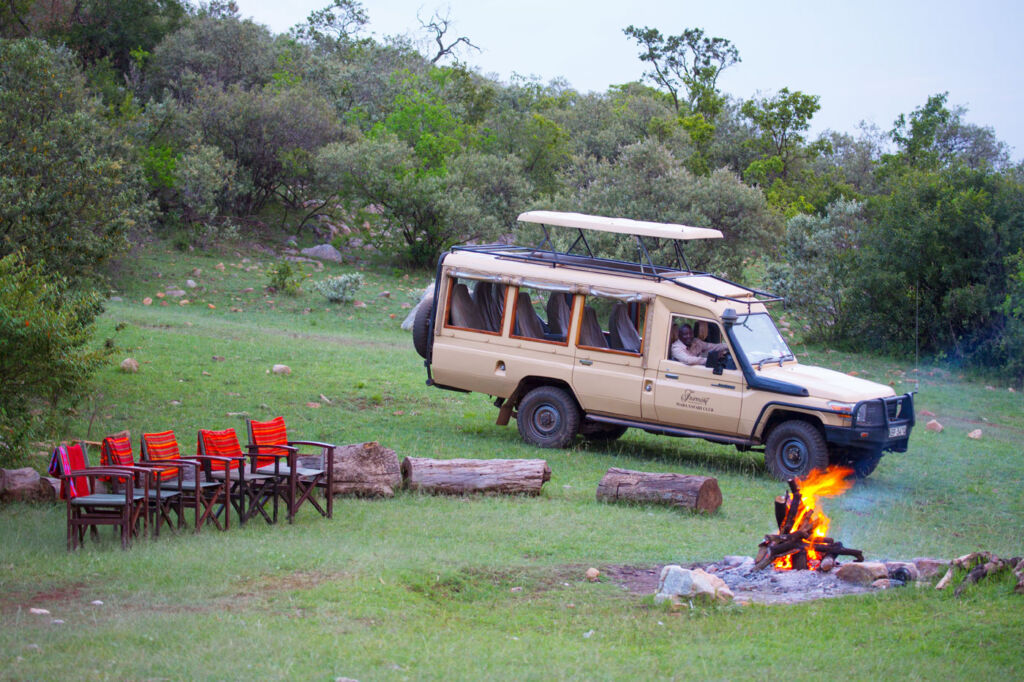 The 360-degree views here are incredible. For an urban dweller like myself, the sense of freedom is exhilarating: fresh air, clear blue skies and just animals and stunning landscapes for hundreds of miles. Our Landcruiser is the perfect height for game viewing: first zebra silhouettes against acacia trees and the miles of grassland and Aitong Hills behind. Then we approach a group of wildebeest, their rounded humps reminiscent of a Lascaux cave painting. Beautiful zebras these, each with unique black brushstrokes across their strong bodies. Graceful giraffe in solo and pairs, cantering across the green landscape.

We approach a solo water buffalo, his horns positioned like a judge’s wig, staring at us imperiously from a thicket. Then a surprise appearance from a beautiful jackal scampering around the vehicle. We are close enough to touch its bushy fox-like tail, as it runs among carcases from previous kills. Then seconds later – a male lion! Simba is asleep, completely relaxed flat on his back. Legs akimbo, enormous paws resting on a full stomach. He’s only a few feet from the Landcruiser. My heart is booming. This is wildly exhilarating yet somewhat terrifying. Our Landcruiser is open on all sides. He could jump in any second. But the wildlife here are so used to the vehicles, this beautiful lion completely ignores us. Then we spotted another male. Clearly a fighter, he has a deep gash above his left eye. What a beautiful, noble face. Then more.. two females resting, their cubs playing a few feet away.

Unexpectedly, Henry stops the Landcruiser next to a wooden shack. We’re in the Aitong Hills now, the flat savannah giving way to rocky outcrops and beautiful trees. “We’re going on a safari walk now,” he says. Dressed for cocktails, we are slightly bemused. The safari ‘hike’, to our delight, was a five-minute hill stroll towards a heart-stopping scene: two magnificent white rhinos, Kofi and Queen Elizabeth, grazing just a hundred feet in front of us. Kofi was born here in 2008 in the community-owned Ol Choro Oirogua Conservancy, and both he and his Queen are guarded 24/7 by machine-gun, armed soldiers. They seemed little disturbed by our presence, and what a privilege to be so close to these endangered beauties.

Our sundowner on the slopes of the Aitong Hills was bathed in a magnificent red-orange sunset that lit up the horizon. Warmed by Amarula liqueur, we chat by the campfire as darkness falls, reluctantly leaving since nighttime and fire attract predators in the African bush. A delicious dinner at Osuata awaited us: fabulous cuts of barbecued meat as well as fish options and beautifully prepared fresh salads and desserts.

The grunts and splashing of wading hippos in the river below were my alarm clock the following morning for our dawn game drive. Heading out of camp we immediately spotted a hyena. Despite their negative reputation, they are quite impressive and have even been known to gang up on lions, such is their tenacity. Henry spots a cheetah relaxing in the long grass and we drive over for a closer look. Alert, noble and built for speed. This cool cat is truly mesmerising.

We see plenty of warthogs too, which are found across the Mara. Such characters with their huge snouts, fearsome horns and amusing habit of eating on bended knees. And a peculiarly dainty walk. We also see monkeys, baboon, gazelles, zebra and more giraffe. The only wildlife we didn’t see were elephants, which were apparently grazing in another part of the Mara. 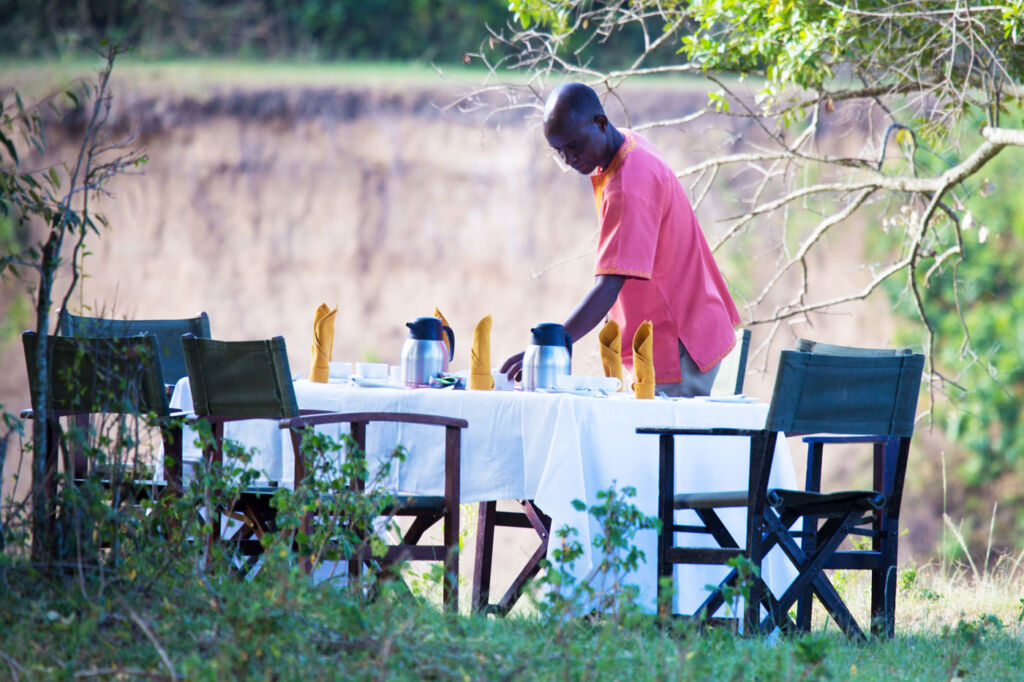 Our post-safari bush breakfast was set out on tables on a low ridge overlooking the River Mara. Warm sun, hot food and such a stillness in the magic of nature. We were so well looked after by John Kin’gori and chef David. Fruits, biscuits and delicious hot breakfast eggs, bacon, sausages. Priceless moments. 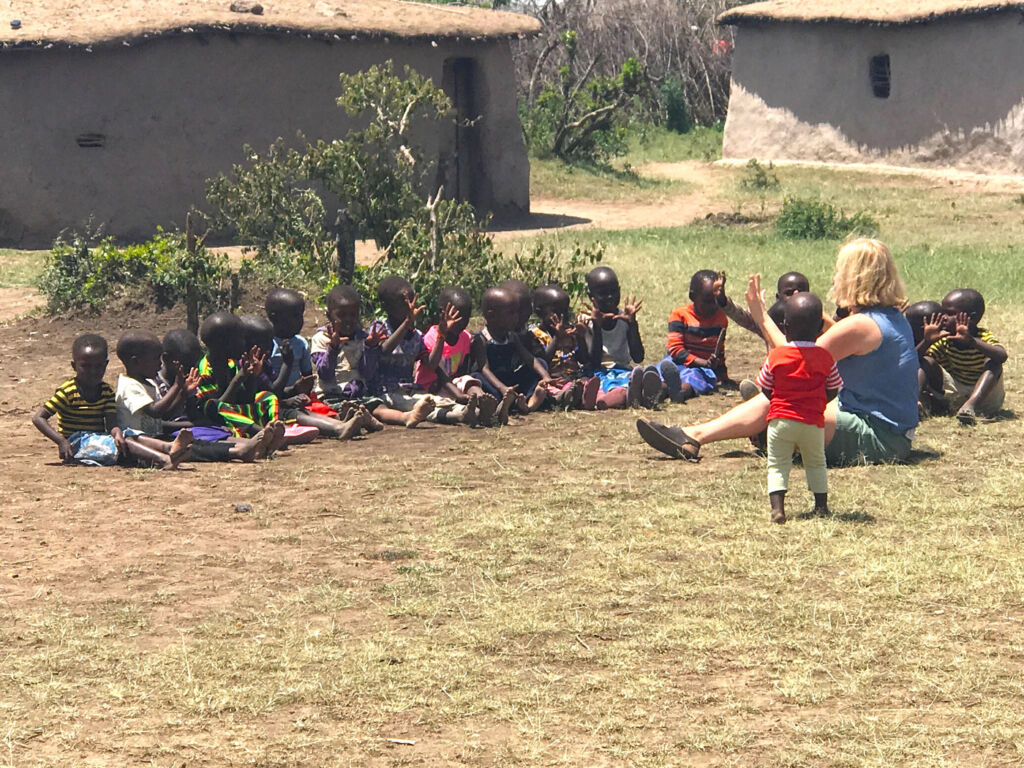 Then, the experience I’d been waiting for – a visit to the local Maasai village. We are met by the young son of the chief, ole Maitai, who leads us inside the compound of 22 mud-baked houses. The women in their brightly coloured shawls are caring for the excited children, while the men dance for us again. Their red shukas astonishingly bright in the hot sun that catches their beautiful beaded jewellery. A couple are wearing long braids, signifying they have killed a lion. “With a spear,” they tell me proudly.

We’re given a fire-making demonstration and shown inside one of the dwellings, with its tiny windows and doors as protection from predators. A pot on an internal fire. Stifling heat. There’s a guest room here too. The Maasai are nomadic and demolish their houses before setting up camp again elsewhere. Goats and sheep are their lifeblood – quite literally. Apparently, this tribe doesn’t eat chicken but rear them to sell to other tribes to buy clothes for their children.

I play with the beautiful children before we’re taken to their ‘market’. Necklaces, spears, shields, bracelets, belts, jackal’s teeth and more laid out on the dry-baked ground. And some beautiful hand-made jewellery. Be prepared to bargain hard here. 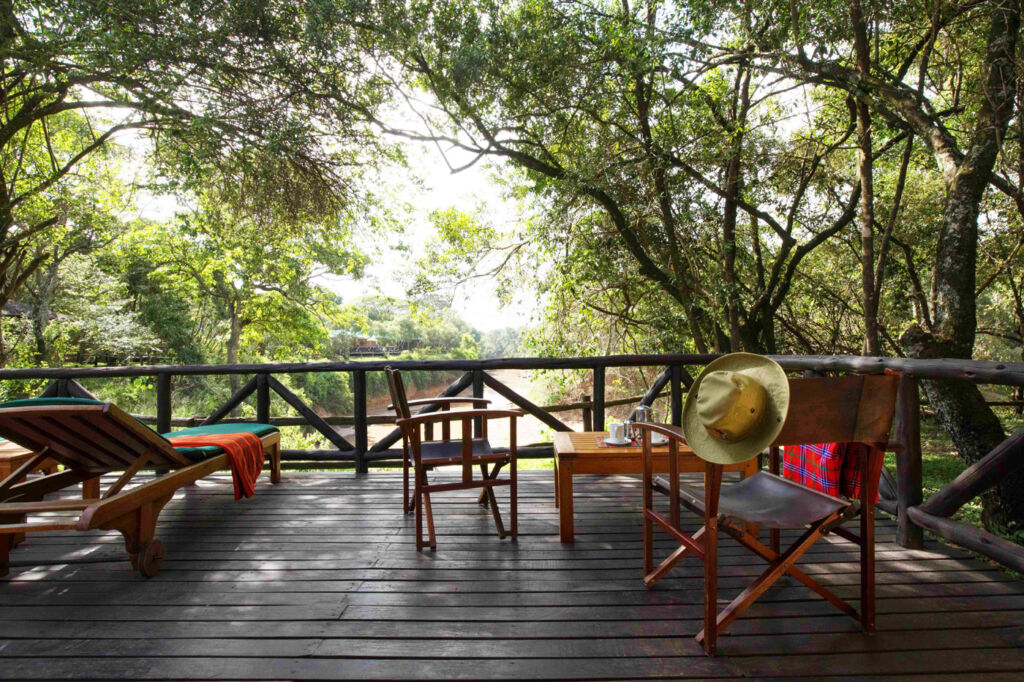 A special treat awaited us that evening with a fabulous barbecued dinner on the hippo hide deck above the Mara, between tents 45 and 46. We could make out mother and baby hippos sploshing their way upstream. An amazing sight.

Our last morning game drive was followed by a relaxing sunbathe and swim at the pool. More energetic options are also available, including a two-hour walking safari – with an armed guard and two Maasai warriors to frighten off the lions. And bird walks with more than 70 species to spot. Alas, we didn’t have time for a dawn balloon safari, but I imagine that would be an amazing adventure, especially during the Great Migration. 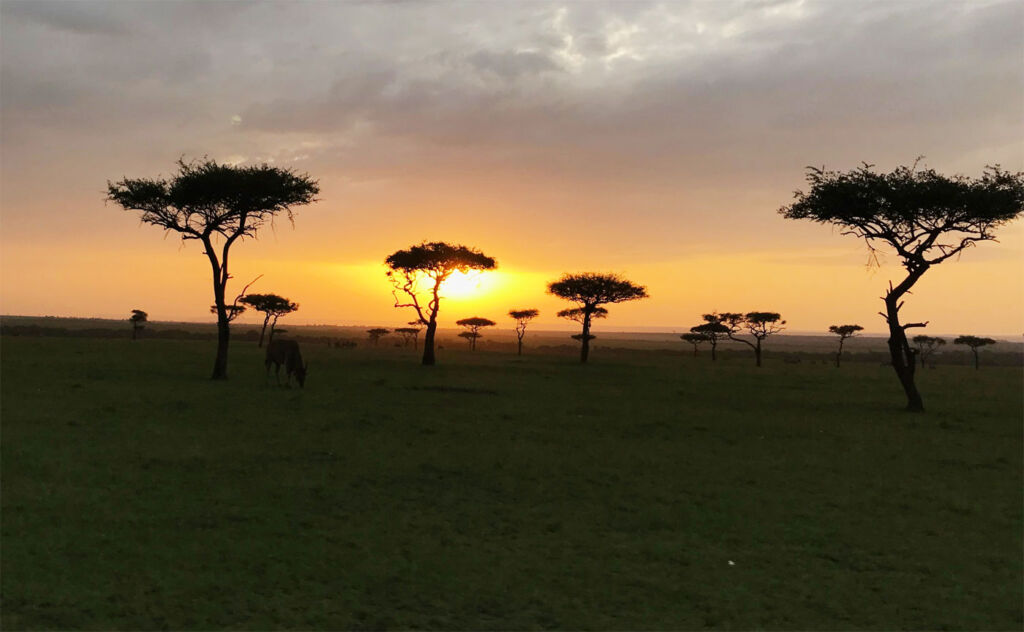 My stay at the unique Fairmont Mara Safari Club was a once-in-a-lifetime experience that took me to the heart of Kenya: both her people and her wildlife. Mama Africa is already calling me back…

Fairmont Mara Safari Club – Where and How