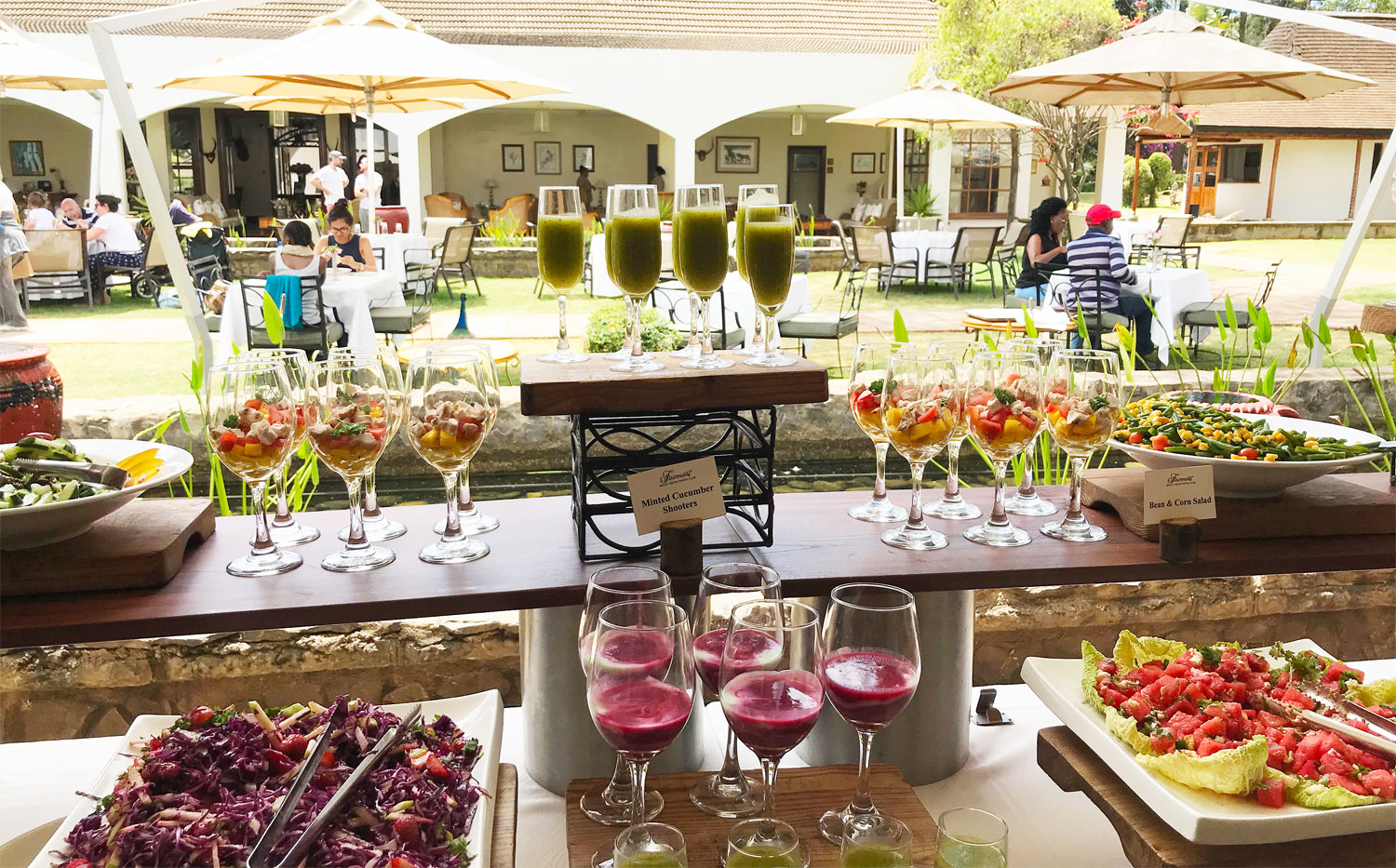 We had lunch in the courtyard (intriguingly divided by the Equator line – we chose to eat in the Northern Hemisphere). The choice of food here was superb: hot and cold dishes, salads, soups, starters, an incredible array of desserts and fruits. And a meat grill with freshly barbecued cuts of chicken, lamb and beef. The pterodactyl-like Marabou storks with their grizzled heads waited patiently for titbits on the rooftops. They are the most extraordinary birds. They really do stalk when they walk.

Afterwards, I relaxed by the inviting outdoor pool, enjoying the spectacular views over sweeping terraced lawns towards the golf course and the rising majesty of Mt Kenya in the far distance. Of course, you could spend the whole time pool lounging, or be relishing the spa treatments (great massages from Margaret) but there’s so much else to do. There’s a nine-hole golf course, a maze to get lost in, tennis and basketball courts, as well as horse-riding, mountain biking and nature walks. And fabulous bush dinners and game drives at Solio Game Reserve, Sweet Waters Game Reserve or further afield at Aberdare National Park and Samburu Game Reserve. 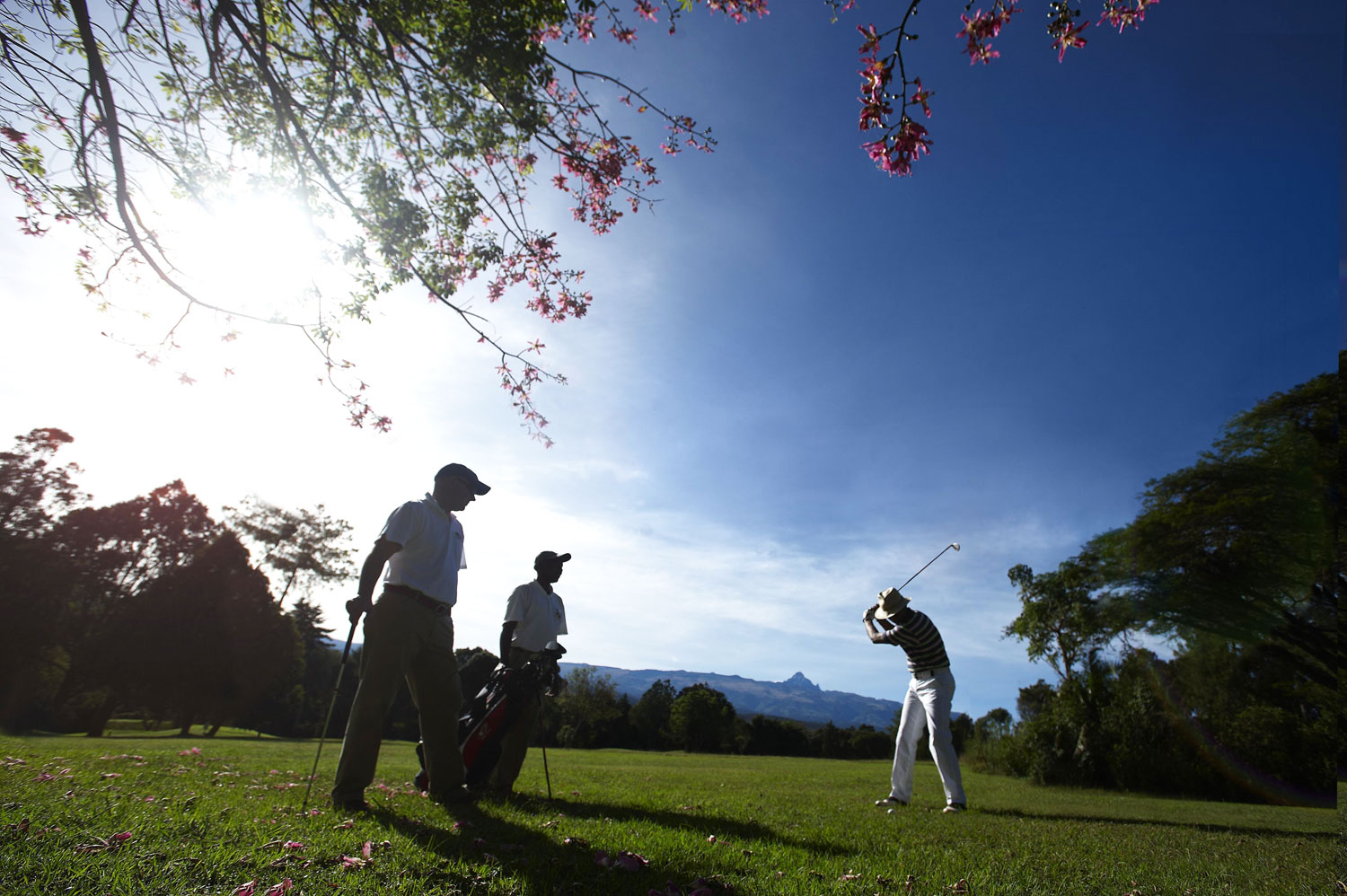 I took one of the mountain bikes around the estate and came across a group of Colobus monkeys playing tag in the trees. Black and white long-haired bodies leaping from branch to branch, their long white bushy tails like trailing scarves.

That evening we dined on succulent barbecued pork, beef, lamb, Berber chicken and marinated prawns on the lantern-lit pontoon deck over the pond. Warmed by the lively fire and fortified by Tusker beer, mains included pan-seared fish and delicious truffle mash, accompanied by fine local vintage wines and fabulous desserts (mousse, fudge, macaroons). The backdrop to our voices were fish and frogs in the lake below us, their grunts and croaks echoing around the estate giving the impression of much larger beasties. 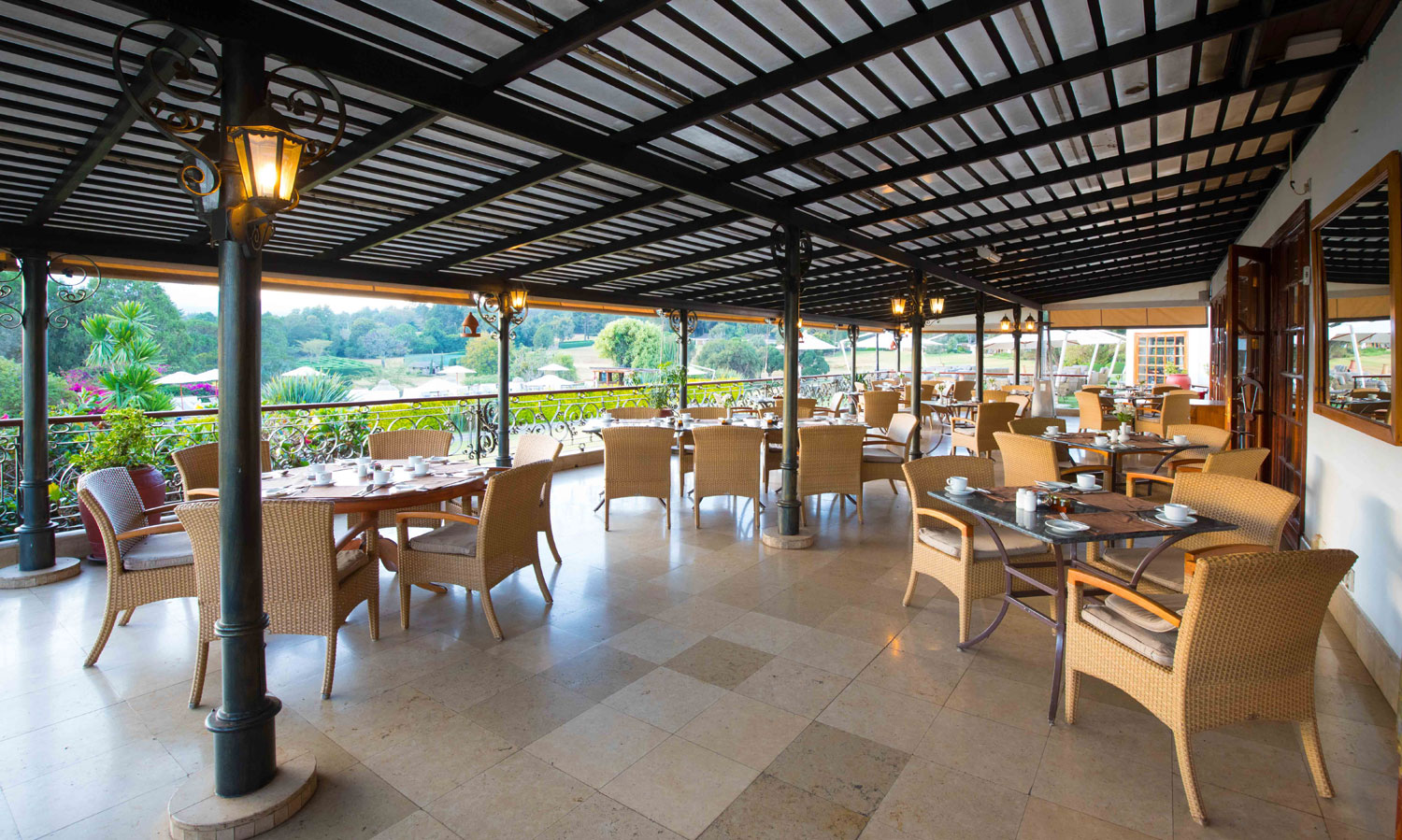 After a sumptuous breakfast at the main house the following morning, we head for the Ol Pejeta Conservancy an hour’s drive from the hotel. Zebra, wild dogs and lions are here. As well as the world’s last-remaining three northern white rhinos and it’s a sanctuary for 113 critically endangered black rhinos and is the largest black rhino sanctuary in East Africa. Today the demand for ivory comes from Asia and the Middle East, where rhino horn is falsely considered to have medicinal properties and is used to make ornamental dagger handles. A kilo of rhino horn can fetch up to $60,000 on the black market. Ironically, rhino horn is just made of the same substance as human fingernails – keratin.

We were honoured to meet Baraka, the blind black rhino who lives on his own 100-acre enclosure. He has plenty of visitors and a specially designed platform affording a close-up experience with this remarkable animal. He was sleeping when we arrived, yet the brave keeper went down next to him to take photos. 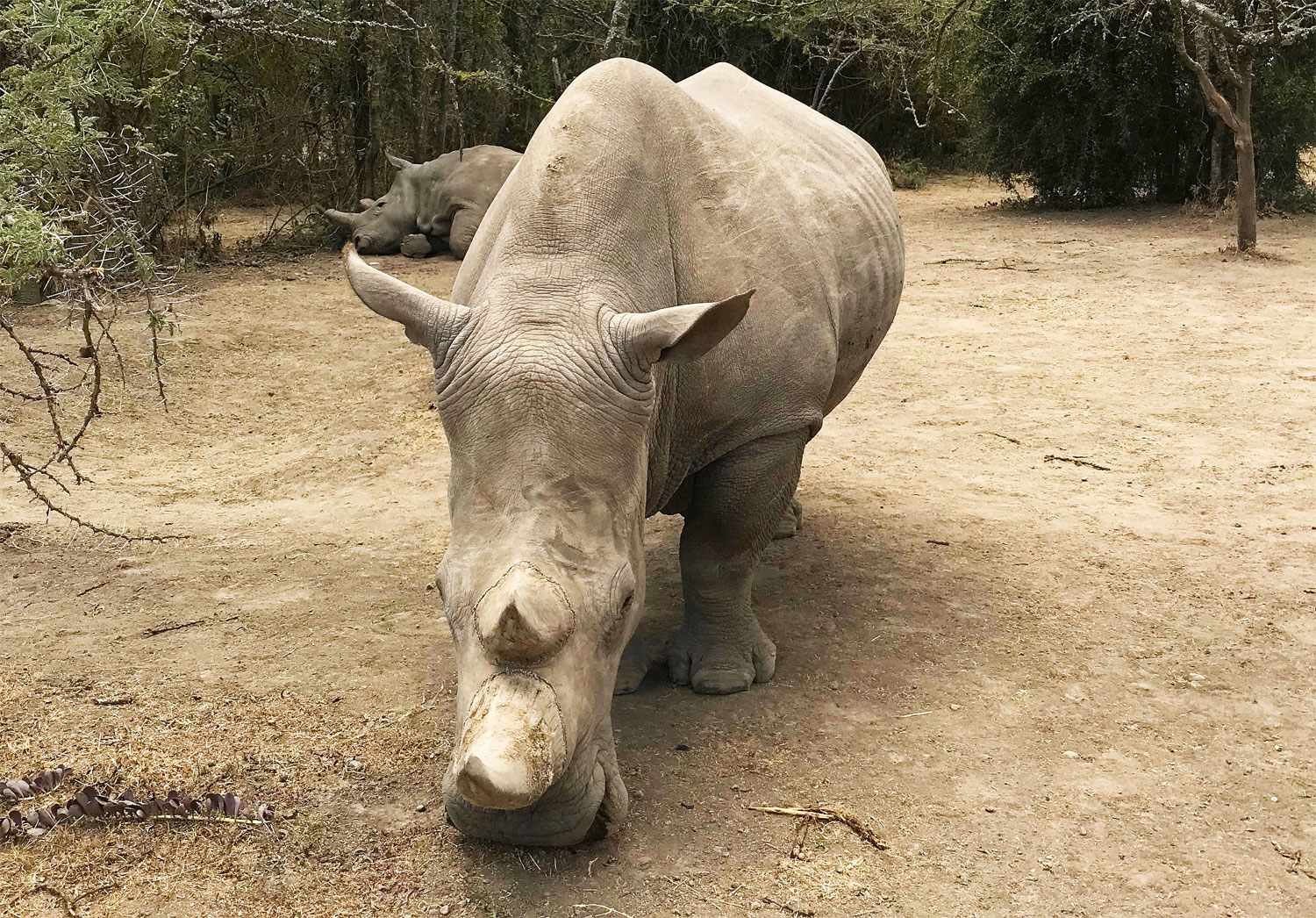 In 1970 there were around 20,000 black rhinos living in Kenya. Due to poaching and drought, there are significantly less. We next meet Sudan, the only remaining northern white rhino. Thought to be about 45, he’s an old fella, heavily protected. He’s not entirely alone, there are three female northern white rhinos here too, but they are not able to become pregnant. So, the ambitious plan to avoid complete extinction is to use in vitro fertilisation. Since writing this, Sudan has sadly died. Even more reason to protect these irreplaceable species.

Returning to the Fairmont Mount Kenya Safari Club for lunch we were treated to the most gorgeous dining setting in the exquisite Rose Garden. Beautiful arches and pergolas, running stream and indigenous trees providing shade, it felt like an English country garden. The perfect wedding location, we savoured tuna starters followed by an amazingly spiced vegetable curry with the best crème brulée. Magical.