For us, the Cameron Highlands Resort lived up to and exceeded our expectations. A resort of class and style that harks back to the colonial times coupled with a liberal dash of modern luxury and a sprinkling of Asian hospitality. For me personally it was a perfect holiday break, a chance to put on my best ‘Bib and Tucker’ relax and imagine times gone by.

A week before we left to come here, a well known  Asian Architect asked me what my definition of Luxury was, I told him point-blank, “I don’t define luxury, I am the person that defines luxurious”  Definitions for the word luxurious:

Given that the above are definitions from the dictionary, It becomes obvious to me that the Cameron Highlands Resort and Luxurious are a perfect fit.

As with anyone resort, there will be a few small ‘niggles’ here and there, but nothing worth mentioning and certainly nothing to impact on what was a relaxing, fun and memorable stay. In my role as an advisory board member of Seven Stars and Stripes Inc, I will be heartily recommending the Cameron Highlands Resort for an award for its commitment to keeping Colonial Luxury alive and well in the 21st Century.

Travelling to Cameron Highlands Resort
Cameron Highlands Resort is located in the state of Pahang, approximately 200 km north of Kuala Lumpur on the east side of the border between the states of Perak and Pahang in Malaysia. At about 1,500 metres above sea level, it is the highest area on the mainland stretching along a plateau set high above the river valley and enjoys a cool climate and fresh air, making it the perfect holiday getaway. Temperatures fluctuate between 22° and 25° Celsius during the day and between 15° and 22° Celsius at night. 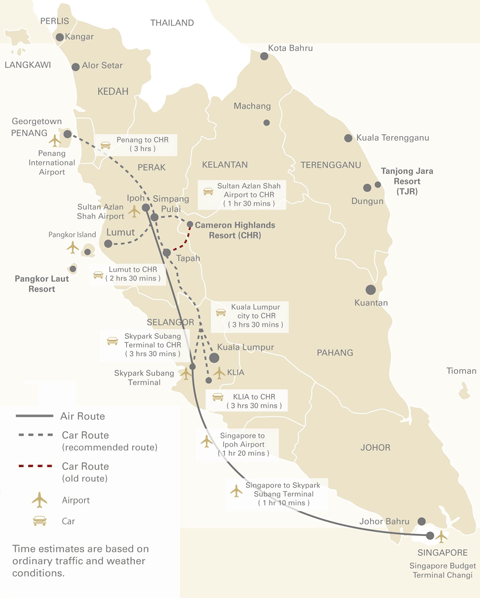 Local Information
Cameron Highlands was named after William Cameron, a British Government surveyor who discovered it in 1885 whilst on a mapping expedition. However, he failed to mark his discovery and it was not until 1925 that Sir George Maxwell recorded Cameron’s discovery and decided to develop it as a hill resort.

The fame of Cameron Highlands grew during the colonial era. British colonials were attracted to this cool hill station, its climate tailor-made for nostalgic reconstructions of English cottages, narrow village lanes, invigorating hikes through the countryside, rounds of golf and afternoon tea and scones accompanied by locally produced strawberry jam.

British expatriates would frequent the highlands on vacation, to relax and escape the lowland tropical heat, and British planters soon realised the potential of its fertile mountain slopes for growing tea, then a prized commodity. Cameron Highlands is still home to many tea plantations, as well as strawberry and vegetable farms, jungle trails, cascading waterfalls and rose gardens. Much of the highlands’ character remains unchanged, exuding an old English charm.