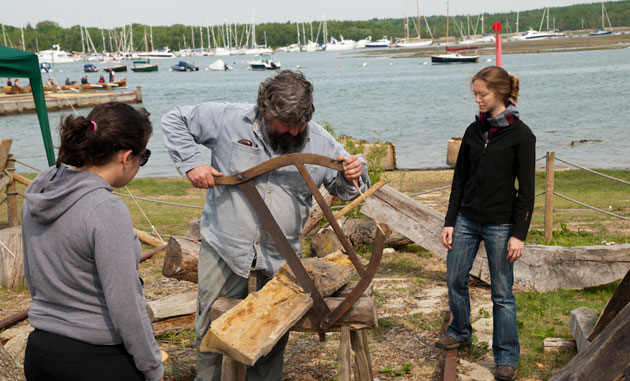 Over the UK Bank Holiday weekend, 5th – 7th May, archaeology students from the University of Southampton will take a step back in time to the days of Britain’s most famous Royal Navy flag officer, Vice Admiral Horatio Nelson.

They will spend the weekend at the historic village of Buckler’s Hard, where ships for Nelson’s Trafalgar fleet were built, getting hands-on experience of using tools and shipbuilding techniques from the 18th and 19th centuries. Visitors can watch as the students convert oak timbers from the Beaulieu Estate, into the main components of the framework of a ship, discovering the challenges faced by shipbuilders of the time, and how they overcame them. 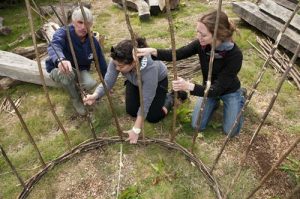 Living History Guides will be on hand to tell visitors what life was like, living and working in the village during its shipbuilding years. Originally called ‘Montagu Town’ by John, 2nd Duke of Montagu, Buckler’s Hard nestles on the banks of the Beaulieu River, in the heart of the New Forest National Park. A visit to the Maritime Museum reveals the story of this unique village, bringing to life the characters who lived here at the time of Henry Adams, the Master Shipbuilder at Buckler’s Hard between 1744 and 1805. The redisplayed museum offers a new interpretation of Buckler’s Hard and the Beaulieu River, focusing on its ships, which have been the inspiration for a wealth of art, literature and films.

Historic displays in the Labourer’s and Shipwright’s cottages show how the village would have looked in the early 1800s and in the New Inn, you can hear residents from the time gossiping about local matters. Following the Woodland Walk, children can learn how the local timber at Buckler’s Hard was used to construct ships in the 18th & 19th centuries and the whole family can enjoy a tranquil River Cruise, which transports you on a journey along the river with a commentary revealing the history of the Beaulieu River and the abundant wildlife that inhabits its riverbanks.Don’t miss the most recent addition to Buckler’s Hard; the indigenous boat used by Daniel Craig’s Bond in Quantum Of Solace. Now displayed on the river bank close to the shipwrightry display area, the boat was used in a daring stunt sequence in which Bond landed on the boat on a motorcycle and took part in a gunfight at high speeds on choppy water, followed by a dramatic water chase. The boat has been put on display as part of the celebrations to mark the 50th year of James Bond films, and complements an exhibition of 50 James Bond vehicles being hosted by sister attraction, Beaulieu, during 2012.

Buckler’s Hard is a place for relaxation, as well as exploration. The Captain’s Cabin Tea Rooms serves a range of light refreshments and drinks, including delicious cream teas, throughout the day.  The Master Builder’s House Hotel, situated at the bottom of the street, offers a bar and restaurant with river views.