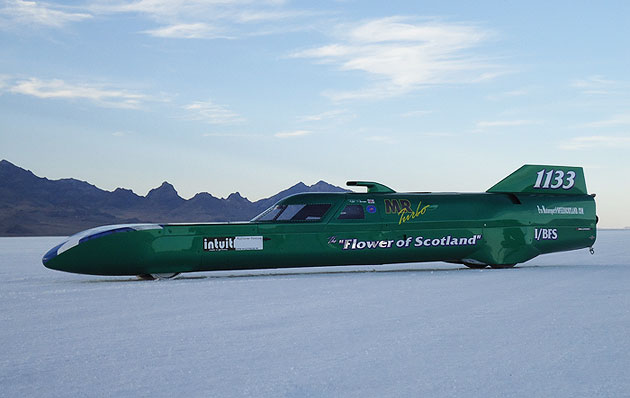 The incredible bid will require a timed run of 315mph in a sub-1 litre engine car the same size as a Nissan Micra on the legendary Bonneville Salt Flats, Utah, USA.

Rick Pearson, a former Clio Cup and Le Mans racer will pilot the Speed Scotland-prepared Flower of Scotland as it takes to the unforgiving salt plains deep in the Utah desert for a second attempt at reaching 315mph. The seven man team narrowly missed out 12 months ago, running just a few notches shy of the target before gear box problems and strong winds forced a premature halt.

Success would see the Lanarkshire-based Speed Scotland claim the 1,000cc World Land Speed Record, a place in the Guinness Book of Records and the honour of being the fastest Scottish team ever on the Salt. Rick Pearson would also become the seventh Brit in history to join the Bonneville 300mph club and only the third alive today.

The August trip will take place under the watchful eyes of a BBC documentary team, commissioned to film the record breaking attempt for a series of programmes to be broadcast on BBC2 in January. The cameras may also capture the beginning of a greener fuel revolution as Speed Scotland boss, Derek Palmer wants to show that electric cars can be just as fast and just as fun as their petrol-powered counterparts. To help with their title bid, the team has developed its own technology and is confident it has put last year’s ghosts behind it.

To help with the Flower of Scotland record breaking bid, Speed Scotland is seeking sponsorship backing.

Rick Pearson said, “None of us would be going back to Utah if we didn’t firmly believe we could win the title. The official land speed record sanctioned by the SCTA (South California Timing Assoc) is 313 mph and we passed that comfortably last year.

We suffered last year due to lack of funds but, with the BBC cameras following us and two one hour prime time TV slots confirmed after Top Gear, we have lots of offer potential sponsors. It’s an amazing opportunity to help make history.”

The Flower of Scotland is a 22in-wide, methanol-powered Streamliner. It is currently on its way to America and will begin its title challenge on August 11th.