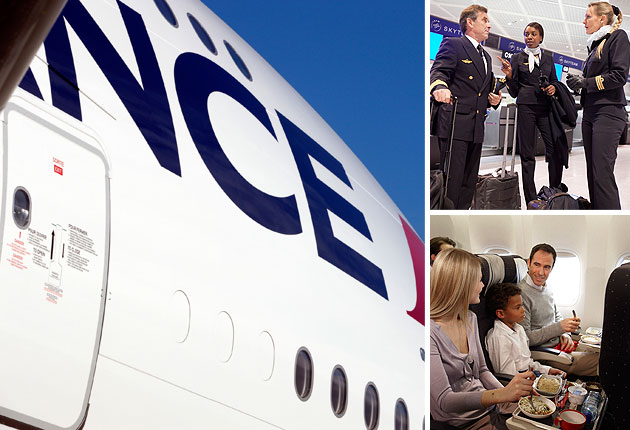 Paul Godbold flies Air France Economy Class from Malaysia to the UK – How was the experience and do the savings made over flying Business Class make it worthwhile?

(This is the second part of a two part travel feature (Part one) detailing my experience flying Air France and KLM. My aim is to sample as many airlines and travel classes as I can, bringing you an honest appraisal based upon my personal experiences to assist you in choosing the most suitable form of air travel).

After a mad dash we reached the Air France departure gate at KLIA, aside from the beads of sweat running down the side of my face, I was also more than a little embarrassed being one of the last people to board. The flight crew and stewards greeted me with a warm smile, my riposte consisted of a breathless apology for my lateness and a polite thank you. I ushered my wife towards our two seats adjacent to the window located above the wing, I recall looking down and thinking, ‘Was there a mistake?’, did I pay for something even lower than economy class by accident? The seats I was looking at seemed to bear little resemblance to the promotional images of economy class used by the airline.

I sat down and removed my hand made tailored blazer looking for somewhere to hang it, alas there was nowhere, not one single hook. Still a little hot and flustered from my Usain Bolt-like run through the airport I reached up to turn on and direct the air-conditioning vent at me, so imagine my horror when there was nothing, no vent, just a row of lights on what was now becoming a rather stuffy confined area. As we waited for take-off I looked through the seat pocket in front of me that contained one tatty in-flight over-sized magazine that was no more than an advert for Air France on-board duty free, a sick bag and an emergency instruction leaflet. Being the owner of one of the most popular luxury media brands in the world, I did take a few moments to browse through the magazine to see what was available to purchase and most of it was over-priced, low-quality branded tat. Looking around I could see that the aircraft was full, I cannot recall seeing one empty seat, so the thought of a few hundred people breaking wind and not cleaning their teeth in a confined area filled me with little enthusiasm (we’ll get back to this a little later).

Our departure was around midnight Kuala Lumpur time and after a long drive I was feeling more than a little tired. The plane take off was relatively straightforward and after a few minutes we were flying through the clouds above Malaysia.

I opened the small packet containing the blanket and tried to place it over me so I could get some sleep, unless I am completely mistaken, it was the size of a bath towel and made of a horrible cheap-feeling material barely thicker than a yellow polishing cloth that clung to me in an awkward and restrictive way. During this feature I will not be going into too much detail regarding the in-flight food supplied by Air-France purely from the perspective that I can’t recall what I ate. I don’t remember any adverse thoughts regarding the food and had no ill effects afterwards. So it must have been functional and served its designated purpose. Whilst on the subject of the in-flight service, I do recall that the female steward looking after our section of the aisle didn’t smile, hardly reacted to my polite gratitude and seemed to be completely disinterested in everything aside from going through the motions of doing her assigned job.

There was an obvious solution to putting an end to what was turning into a rather unpleasant experience and this was to sleep through the flight. I am not an over-sized person by any stretch of the imagination at 1.82m and 75kg, but the cramped legroom and the metal base of the seat in front of me was making finding a comfortable foot position nigh impossible. Perhaps reclining the seat would make things better? I pressed the button on my arm-rest and pushed back, the chair barely moved, so I pushed even harder and it rapidly shot back approximately six inches with a dull ‘thud’. It seemed to take forever to fall asleep due in no small part to the interior side wall of the plane that had become so cold that I had to keep away from it as much as possible wedging the pillow and blanket between myself and the wall to avoid an even more uncomfortable journey. After eventually falling asleep, I was awoken by turbulence and the ‘bong’ of the verbal announcement to put on our seat-belts. The persistent turbulence was causing me to feel a little air-sick, the cabin was overly warm and there seemed to be no air-conditioning on. All I could smell was stale air and expelled bodily odours, it was truly horrible. The overriding smell, cramped seating, multitude of people coughing and hacking and the temperature were adding up to a very uncomfortable flying experience.

After what seemed like an eternity I did arrive in France and only just caught the connecting flight to Manchester due to an overly-rude French Customs Official that held us up, examining every aspect of our hand luggage and questioning me over the duty free single bottle that I had purchased at KLIA. Although the bottle was sealed and in a duty free bag with a receipt, I could not see any point in x-raying the bottle multiple times and questioning me over it. I politely asked if the customs official was finished as the final call had been announced for our flight to which he replied with a pronounced scowl and witnessed by multiple people, ‘Sir, I am security and I do not care if you miss your flight’.

At this point you’re probably wondering if things had improved? Well I did arrive in the UK and my wife and I had a spectacular time with Rolls-Royce as well as performing travel features at some amazing luxury hotels, visiting castles and filming in spectacular locations. The return flight was with KLM (Premium economy) which was much better, happier staff, more leg-room, seat recline and good air-flow.

The only major downside was that although we arrived back safely in Kuala Lumpur, our luggage did not. The airline classed the luggage as delayed, however the online system reported that it was still to be located. It did turn up late the following day but we had to go through the hassle of driving and parking at the airport to collect it ourselves. On top of all that we even had to pay a small fee for the privilege!

Update: I did not want to write this review as Luxurious Magazine doesn’t make a habit of publishing negative features and I personally would like to put this experience down to an airline ‘Off-day’. I made countless calls to Air France prior to embarking, explaining that I would be writing this review for publication on luxuriousmagazine.com, our social media channels, particularly Google Plus where we are the world’s most popular luxury brand with over 70 million article views and one of the world’s top ten media brands with well over ten times more views than all the official Air France pages combined. It was also to be published on MSN in Asia and in conjunction with TUMI one of the world’s largest luxury luggage brands who asked me to chronicle my journey in the form of a written diary to be exhibited and published by the Asian press.

Upon my return I again contacted the media department of Air France in Kuala Lumpur re-iterating the above, even offering to make another un-scheduled trip, tickets paid for by myself and suggesting that they upgrade me one-way, but they declined point-blank, they said that to keep my integrity intact I should write what I experienced.