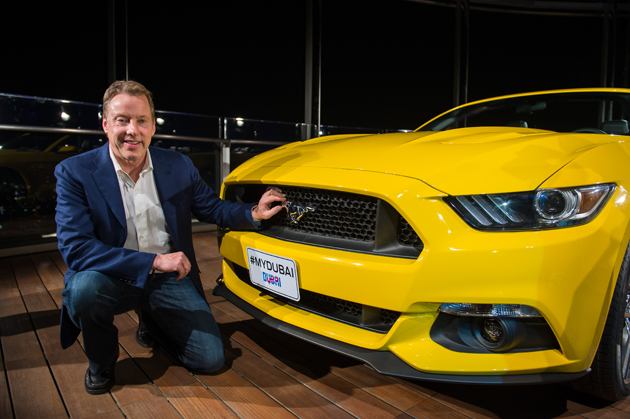 Ford Motor Company, underscored its growing ambitions in the Middle East and Africa, with the dramatic introduction of the all-new Mustang on Dubai’s Burj Khalifa, the world’s tallest building.

Ford Executive Chairman Bill Ford capped the live-action event by delivering the iconic pony badge to the 2015 yellow Mustang on the 112th floor of the skyscraper. The event was viewed live around the world on YouTube as well as by approximately 10,000 fans gathered in the Dubai Downtown area, overlooking the Dubai Fountain and Burj Khalifa. (To see a replay, click on this link.)

“Today we planted the Ford flag in the Middle East & Africa, an exciting, vibrant region that represents the final frontier for growth in the auto industry,” Bill Ford said. “We also sent a message to the world that Mustang is going global after 50 years as America’s greatest motoring icon.”

Viewers of the light-hearted action spectacle witnessed a dramatic journey that started with a hero atop a cliff in Arizona taking an urgent call. The unknown protagonist raced via horseback, airliner, car, helicopter and jet ski to Dubai to deliver the iconic pony badge. Only in the final scene on the 112th floor of the Burj Khalifa – 399 meters (1,300 feet) above the ground — was the protagonist revealed with a wink and a nod as Bill Ford, the great-grandson of Henry Ford.

“A century ago Henry Ford had a vision to open the highways to all mankind,” said Jim Benintende, president, Ford Middle East and Africa. “Placing our regional headquarters in Dubai lets us tap the innovation and imagination that’s flourishing here, helping us to bring our founder’s vision to this part of the world.”

In addition to the new Mustang, Ford also previously announced a plan to introduce new vehicles such as the Ford Focus, Ford Fusion and Lincoln MKC in the Middle East and Africa. The company also announced the accelerated rollout of many new technologies to the region, including EcoBoost engines, SYNC in-car connectivity, inflatable rear seat belts, MyKey and other driver assist technologies.

For the first time in its 50-year history the Ford Mustang will be available in a factory-built right-hand-drive configuration in the UK with deliveries from autumn next year.