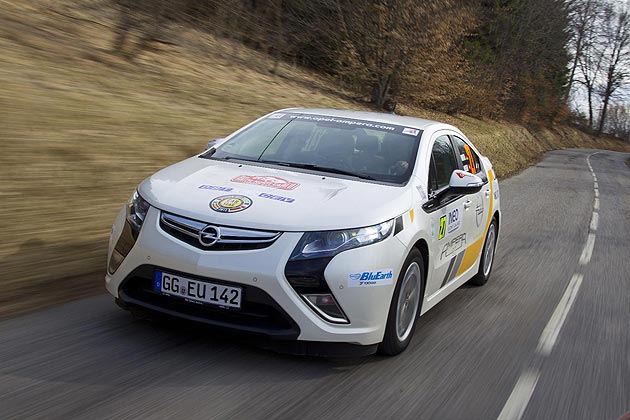 After winning the “Car of the Year 2012” award, the Vauxhall/Opel Ampera has now also won the 13th International Monte Carlo Rally for electric and alternative propulsion cars.

Four Amperas ranked among the top 10 vehicles. The French duo Bernard Darniche and Joseph Lambert managed to beat the entire competitive field. On Sunday, the final day of the contest, the revolutionary electric vehicle reached the finish line in the capital of the Côte d’Azur principality. Some 130 competitors from around 30 manufacturers took part, among them seven Amperas, including one private Ampera team. The other contenders included a Renault Fluence Z.E., a Tesla Roadster sports car, a Mitsubishi I-MiEV and a Peugeot Ion. Apart from the overall victory, the Ampera teams with Charlotte Berton and Olivier Sussot ranked third, Jean-Claude Andruet and Patrick Lienne came in 7th and Hanns Werner Wirth and Daniel Riesen finished 8th.

“The Ampera’s success in this versatility contest under very challenging conditions proves its impressive balance between durability and fuel efficiency. This underscores our leadership role in the field of alternative propulsion,” says Vauxhall/Opel’s Director E-mobility, Enno Fuchs.

Endurance test for alternative propulsion
The rally started in the three towns of Annecy-le-Vieux, Clermont Ferrand and Lugano for 550 kilometres via Digne-les-Bains, the capital of the French district (département) Alpes-de-Haute-Provence to Monaco. On the second day, the teams had to complete a distance of 272 kilometres, leading them through Monaco and the original route of the Monte Carlo Rally through the French Maritime Alps. In two days the teams were subjected to regularity tests and had to prove their driving skills by pushing their vehicles to the limit.

Apart from the regularity tests, the focus lay with fuel consumption. With the help of a ratio derived from vehicle weight, CO2 emissions, the energy density of the fuel and its consumption, the organisers were able to calculate a comparison value and draw up an overall ranking. “The sophisticated technology of the Ampera was always reliable and enabled our tremendous success,” says the French rally co-pilot, Joseph Lambert who celebrated the victory with driver Bernhard Darniche. Darniche already won the legendary Monte Carlo Rally in 1979 and has more than 10 times been successful in winning the special stage over the famous Col de Turini.

The Vauxhall Ampera is the first electric vehicle that can go anywhere anytime. A 16 kWh lithium ion battery powers the 111kW/150 hp electric motor. Depending on the style of driving and road conditions, distance of between 25 and 50 miles can be covered in the battery-operated mode, completely free of tailpipe emissions. The electric propulsion system delivers instant torque of 370Nm enables zero to 60mph acceleration in 8.7 seconds and a top speed limited to 100mph.