With a history dating back to 1950, La Carrera Panamericana is a legendary race that hosts hundreds of drivers and co-drivers and millions of classic car aficionados. This year, during the 24th edition of the event, one hundred and eighteen cars with drivers from 15 different nationalities participated in La Carrera Panamericana. They traveled more than 3’000 kilometers (1’800 mi) across Mexico, starting their journey in Huatulco, located on the south coast of Mexico, to finish seven days later in the colonial city of Zacatecas.

The first car to reach the finish podium -located in front of the Cathedral of Zacatecas- was the Studebaker (#102) of Ricardo Triviño. As the winner of this 24th edition, both him and his co-driver Mr. Marco Hernández were extremely proud and excited to have won this race, a competition of endurance, for both men and machine. Mr. Ricardo Triviño said upon his glorious arrival: 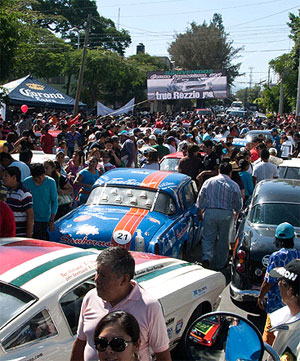 ‘Perseverance, wisdom and true passion are the key elements required to win a race like this. It is exciting that Frederique Constant supports these same values in the development of their watch collections!’ Behind the winners came Douglas Mockett (Oldsmobile, #133) and Hilaire Damiron (Buick, #115) on second and third place for the overall race.

Some other famous drivers that attended this competition were Jo Ramírez, better know as the “Champion Maker”, and the Mexican driver Michel Jourdain.

Pedro Neumann, Frederique Constant´s exclusive distributor in Mexico, welcomed the competitors at the finish in Zacatecas. Neumann said: “La Carrera Panamericana is the most important automotive event in Mexico, and world famous for being one of the toughest and most challenging road races in history. Frederique Constant is passionate about classic and vintage cars, and therefore extremely pleased and honored to be the Official Timekeeper of one of the most important classic car events in the world”.

During the award ceremony, Pedro Neumann on behalf of Frederique Constant awarded the winners with a Frédérique Constant timepiece from the Vintage Rally Collection. This collection was entirely inspired by the magical universe of classic and vintage cars.