With its hand enameled dial the Tourbillon Grand Feu watch will certainly become a highly sought-after rarity as genuine enamel dials are only a handful of manufacturers with an incredibly rich tradition. 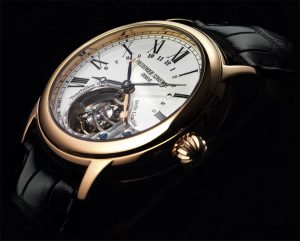 The art of enameling is an ancient technique where finely powdered colored glass is applied to a metal plate. The metal plate with the glass powder is then backed in an oven, hot enough to melt the glass. This enameling process produces a beautiful deep, shiny surface.

The enamaling process can only be attempted by highly skilled craftsmen as only few of the applied plates will survive the 900+ degree Celsius fire in the oven resulting in an even surface. The slightest imperfection in the mixed powder, the supporting metal plate or a dust speckle will ruin the dial and the enameller has to start all over again.

Based on its award-winning Heart Beat Manufacture Calibre, Frederique Constant developed its Tourbillon fully in-house with a number of unique features:

Lubricant-free running
1. Age-related thinning and drying of lubrication will no longer occur
2.  An escapement wheel without oiling avoids the risk that oil spreads to other parts of the movement.

Very light (low inertia)
The escapement wheel is accelerated and stopped at each tick and tock of the watch.
The lower weight silicium escapement wheel has lower inertia, increasing energy efficiency. 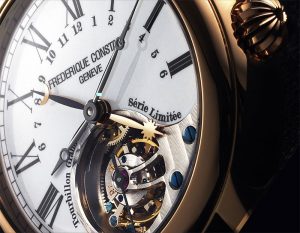 The Frederique Constant Tourbillon Cage consists of 80 individual parts. Each of these parts is produced to the highest possible tolerance, with a precision of 1-2 micron (0.001-0.002 mm). Many of the parts are produced on Frederique Constant’s ultra precise CNC machines in Plan-les-Ouates. These CNC machines of the latest custom-made generation have a tolerance of 1 micron on the X and Y axes and 2 micron on the Z axe. Even with such a high degree of precision, it is impossible to have a 100% equal distribution of weight in the individual parts; for a Tourbillon to run accurately, an equal distribution of weight is essential. Frédérique Constant solved this problem by the patented “Smart Screw” system on the outer edge of the Tourbillon cage. At first, the Tourbillon cage is constructed with a slight over-weight opposite the Smart Screw system on the main Cage Wheel. Thereafter, a highly skilled watchmaker is able to balance the weight into the center of the Tourbillon cage by adding or exchanging tiny metal rings under the two screws on the main cage wheel. Typically, 8 hours are required for a watchmaker to adjust the tiny rings and balance the weight perfectly for the entire Tourbillon cage.

Most competing Tourbillons run at 3 Hertz only. The higher ‘Beats per Hour’ (BpH) enable a higher accuracy of the Tourbillon caliber. The higher oscillation also makes the caliber less susceptible to gyration effects.

The Tourbillon Grand Feu watch will be Individually Numbered