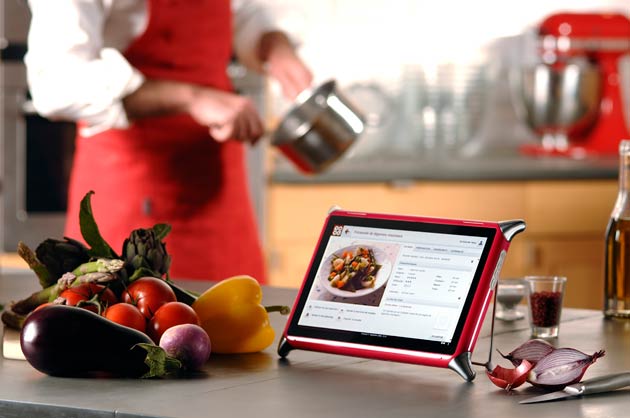 French-based company UNOWHY has launched the English version of QOOQ, the first tablet computer that is made for the kitchen.

Jean-Yves Hepp, inventor of QOOQ and President and Founder of UNOWHY said: “We saw an opportunity to merge technology and content to create a richer and more tactile form of recipe preparation. The QOOQ tablet offers users interaction with top chefs and allows them to learn every nuance of their favourite dish, helping them improve their own talents, making life simpler in the kitchen,”.

By combining interactive technology with exclusive culinary content, QOOQ, the first touch-screen tablet to be made for the kitchen, has now been launched in English by French-based company UNOWHY. The tablet, which serves as a cookery coach, enables users at any level to learn directly from some of Europe’s leading chefs, including Michelin-starred chef Emmanuel Renaut of Le Flocon de Sel restaurant in Megève (south-eastern France).

Each QOOQ kitchen tablet comes preloaded with 1,000 international recipes that can be accessed by cuisine type, difficulty level, preparation time and ingredients, helping to customise the cooking experience to suit the chef and his (or her) kitchen. At the touch of a button, users are also able to purchase additional recipes, which are available individually or in themed packs and are focused on such topics as a destination, an ingredient or a specific chef. There is a catalogue of over 4,000 exclusive multimedia recipes made for QOOQ by more than 100 chefs. 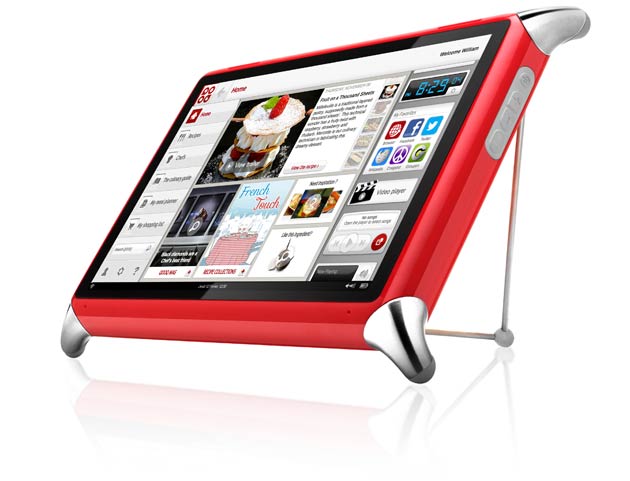 QOOQ presents the recipes in a step-by-step interactive guide to create a variety of dishes through real-time high-definition video, photos and text. The chefs explain in detail every step in the recipe preparation, guiding users through the preparation, from choosing ingredients to the final presentation.

Video speed is controlled by the user, and videos can be paused while the user accesses separate tutorials that explain specific culinary techniques. There is also behind-the-scene footage of the chefs’ restaurants, as well as hundreds of ingredient fact sheets that detail how individual products should be chosen, kept and cooked. For the health-conscious, recipe pages detail the calories contained in a dish and the Meal Planner function allows users to monitor and vary their diets.

“Jean-Yves Hepp said: “No matter the dietary requirements or preferences, restrictions or time constraints, QOOQ is the multimedia culinary coach that can guide anyone, regardless of previous cooking experience,”.

Users are able to build a culinary profile which contains a variety of information, such as allergy details. Based on the culinary profile, the QOOQ tablet suggests recipes to suit individual tastes and needs. Additionally, the Need Inspiration function provides users with ideas for dishes to prepare, depending on time, calorie or produce constraints.

QOOQ’s personalised features allow users to input their own recipes and share them with friends, create weekly menus and shopping lists, and automatically adjust ingredient quantities to suit the number of people per meal.

Unlike any other computer, QOOQ is spill-proof, thanks to its 10.1-inch splash-proof mineral glass screen that is 60% thicker than other touch screens and designed to withstand use by flour- or fat-covered hands. The tablet also has waterproof buttons and non-slip feet. Unlike classic tablets, which are often fragile, the QOOQ tablet resists humidity and heat and can easily be cleaned with a damp cloth.

For ease of use, QOOQ comes with a foldaway stand and an integrated timer. The tablet also has stereo speakers, a rechargeable lithium battery, high-speed USB 2.0 ports, 8GB of memory, as well as an SD or SDHC memory card.

Made in France, QOOQ is the only 10-inch tablet to be fabricated outside Asia. The tablet is available in red, cream and black, retails at £289 and can be purchased directly via the QOOQ website.

Like an ordinary tablet, QOOQ allows web browsing via Wi-Fi or an Ethernet port, as well as access to email, social-media accounts, and online radio stations. The tablet also has a built-in video and MP3 player, a weather application and a digital photo-album function.