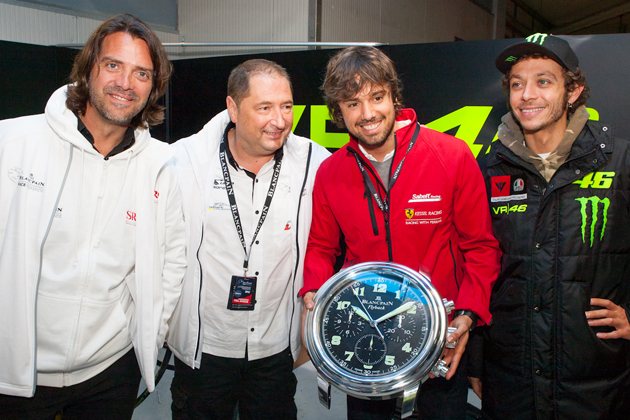 The first racing event of the 2012 season, with 56 dream sports cars, 159 drivers and a total of more than 30,000hp in the Blancpain Endurance Series as well as 17 Lamborghinis LP560‐4 in the Lamborghini Blancpain Super Trofeo demonstrated impressively just how interested the teams and drivers are in the new Blancpain Race Weekends. 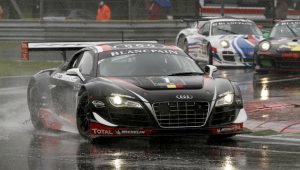 Feeling nothing like spring, continuous rain and cool temperatures around 12 degrees Celsius did not dampen the teams’ and drivers’ delight in competing at the 5,793m (3.6 miles) long Formula 1 track this weekend.

The starting list for the Blancpain Endurance Series, with names like “Il Dottore”, the successful Italian motorcyclist and 9‐time world champion Valentino Rossi, shows just how attractive the event is. The Italian drove a Ferrari 458 Italia, the famous Monster VR46 for his debut in GT sports this weekend for Team Kessel Racing. The professional motorcyclist was thrilled and definitely wants to compete in more events, depending on how they fit in with his MotoGP races. Former Formula 1 drivers Karl Wendlinger (AUT) and Mark Blundell (GBR) are just as excited about the series and the format.

The competitors demonstrated in the free practice and qualifying sessions that it would be an exciting weekend. Extremely small differences in the lap times and fantastic duels prove the high professionalism of the series. The first winners of the 2012 Blancpain Endurance Series were announced after the 3‐hour race on Sunday afternoon:

The 2012 Blancpain Endurance Series will take place at attractive European circuits on six weekends, with a 3‐hour race on Sunday. The Total 24 Hours of Spa will be the highlight of the series at the last weekend of July.

Marc A. Hayek, President and CEO of Blancpain, will participate again with a Lamborghini Gallardo LP600+ at the next event in Silverstone (2 – 3 June 2012). The Swiss will also defend his ADAC GT Masters Amateur Championship title in a Gallardo LP600+. The German racing team Reiter Engineering is in charge of the cars.

The races of the Lamborghini Blancpain Super Trofeo were just as exciting. Launched in September 2008, the series is very popular, with gentlemen drivers competing for points. The amateur drivers faced difficult weather conditions during the weekend. The banks of fog due to the continuous rain reduced visibility and made it impossible for the pursuers of the leading car to see the car in front. The driver change takes place at the mandatory pit stop after the first half of both races. The driver change runs like clockwork in order to keep the time in the pit lane to a minimum.

Stefano Comini celebrated a double victory, driving across the finish line first in both races.

Results of the Races:

All races of the Blancpain Endurance Series and the Lamborghini Blancpain Super Trofeo are broadcast via live streaming on the Internet.