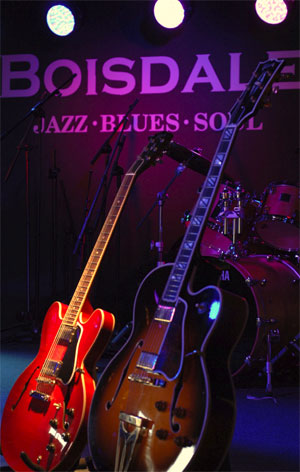 Gibson City Blues Jam will invite guests to become part of the house band, be it on guitar, bass, drums, keys or vocals. Pacifico Blues will support and improvise, incorporating each participant’s style and musical ability. Gibson City Blues Jam celebrates the Blues, Rock n’ Roll and above all, a great night out. “It is the ultimate way to be in the band, but without the commitment.”

The Gibson Custom Shop in Nashville doesn’t just make the worlds finest and most sought after guitars, they make dreams a reality. Gibson Custom have been producing the ultimate hand crafted electric guitars since the 1920’s and who hasn’t dreamed of owning a similar guitar played by the masters of their craft, legends such as Jimmy Page, Jeff Beck, Slash, Eric Clapton, Angus Young, Marc Bolan, Mick Jones, Joe Bonamassa and B.B. King to name a few.

The House Band: Pacifico Blues
Pacifico Blues is a contemporary London Blues outfit featuring musicians from the internationally renowned AllStars Collective; the session musicians who in their day jobs play with the world’s most celebrated music artists. The Gibson City Blues Jam offers the incredible “money can’t buy experience” of performing on stage with some of the music industry’s Elite.

Former Banker and band leader Paul Pacifico said “I worked in the City for 10 years before giving it up to follow my dreams in music.  It’s fantastic to have the chance to come back to the City and play music with all the guys that used to be in bands but now just don’t have the opportunity to play”