Yachts For The Eddie Jordans Of This World 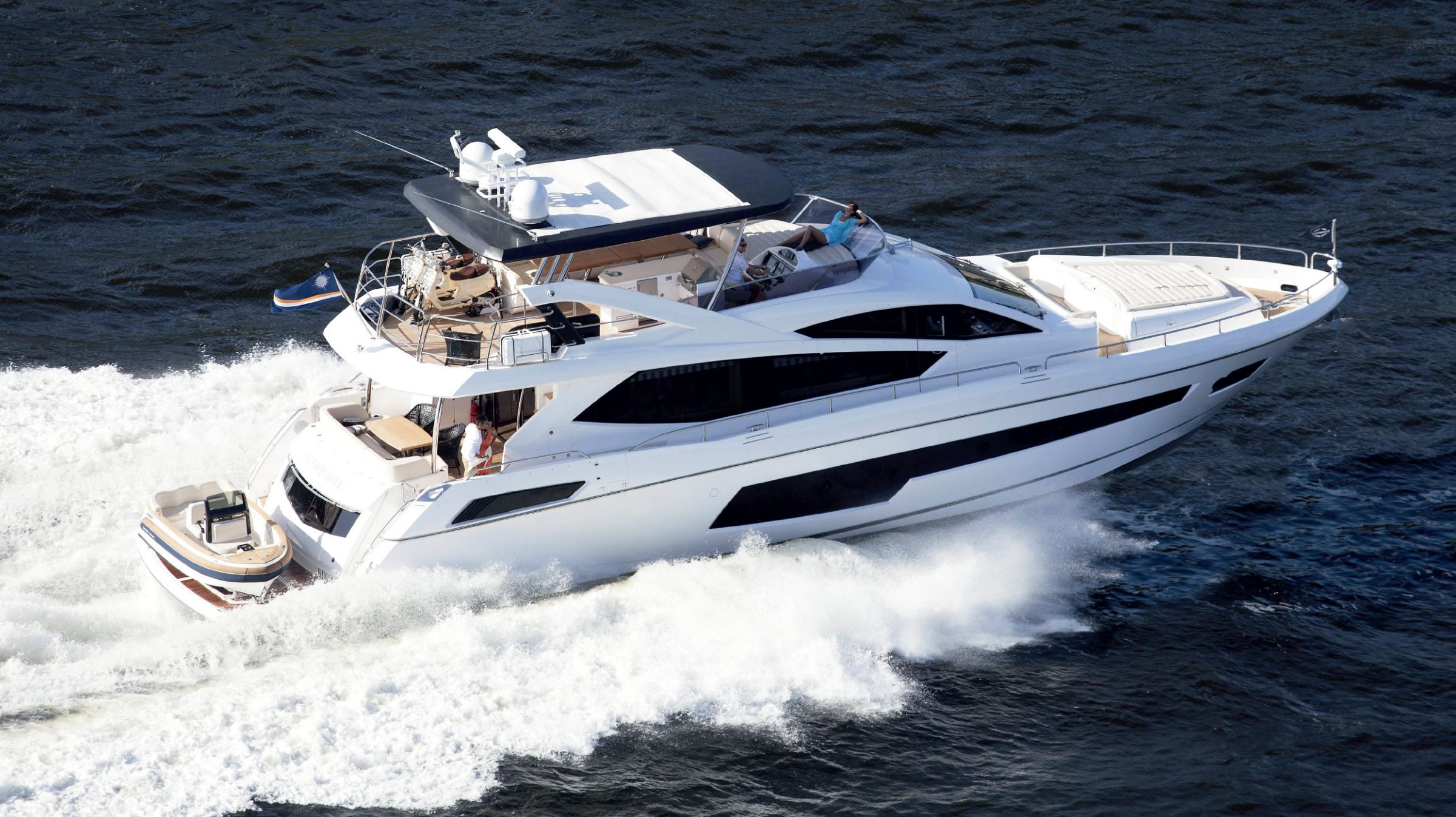 The Formula One legend has already bought 10 yachts from Sunseeker, learns Gina Baksa as she spends a day with the firm’s founder Robert Braithwaite and takes the helm of a 75

Britain is a nation of great entrepreneurs, and an outstanding example of one man successfully creating his vision – probably beyond his wildest dreams – is Robert Braithwaite, co-founder of Sunseeker, the largest UK-based luxury yacht maker.

Since 1969, when he built his first boat (the Hostess 17), Robert (pictured) has seen Sunseeker transform from a regional yacht distributor into a global design-and-build business with annual sales of more than £300 million. Although no longer at the helm, Robert, 73, is on site at Poole four days a week, while his brother John with whom he co-founded Sunseeker is still Product Development Director. Today, Sunseeker International employs designers, engineers and master craftsmen, exporting about 140 yachts a year to more than 45 countries.

I’m here to chat with Robert and take a ride into Poole Harbour on a 75 owned by entrepreneur Nigel Harris, who has kindly brought his yacht over from Lymington for us to enjoy.

It’s a beauty – and Nigel’s first boat. He’s done around 120 miles in just a few months, sailing around the English South coast.

“We were looking for a home near the water and thought a yacht would be perfect,” he tells me.

The amazing fit-out is apparent from the moment I step aboard (my first experience of a Sunseeker). Superb attention to detail, quality craftsmanship from the decking to the sumptuous and very functional interiors, this boat is classy, sophisticated and feels incredibly stable. There’s room for up to eight guests and two crew and she can power through the water at up to 34 knots. That’s fast.

I’m very excited to be aboard – and honoured to be meeting Robert Braithwaite, a hero of mine.

“I left school in Yorkshire at 14 with little education, but I did have ambition. That’s what drove me,” Robert reveals over coffee in the lower lounge. “And once we’d moved to Christchurch in Dorset, I became a marine engineer and decided I wanted to build boats.”

Robert’s parents were in the boating business and worked with Owens in Littlehampton.

“I managed to buy the early moulds to their boats and then went into business with John Macklin. I built my first boat in 1971 – a lovely 17-footer.

“Back in the Seventies there were only seven of us. Today there are 2,000 people at Sunseeker.”

So when did the business start to take off?
“In the Eighties. We needed a name – a brand as recognisable as Hoover who were huge in those days,” he tells me. “So we decided on Sunseeker and then I met Don Shead, a brilliant boat designer and powerboat racer. My brother John, Don and myself collaborated on new boat designs.”

Robert was part of a management buyout in 2006, which ran into difficulties during the crash of 2008 when the banks called in their cash.

“It was the worst day of my life – like losing my family,” he admits.

Venture capitalists FL Partners took over, then sold their interest to the Chinese Dalian Wanda Group in 2013 for £320 million and a 91.8% share. Robert retains a small percentage of Sunseeker, a company he has always run like a family.

“A lot of people have been with us for 39 years. Many left school and came straight to us and are now managers.”

Robert is clearly a man with a big heart.

“It’s an emotional business we’re in,” he says. “Unlike the car industry which is made by robots, our boats are all made by hand. That’s what our clients love too; their boats are truly bespoke. Take Eddie Jordan, for example. He’s bought 10 boats from us. His first was a 20-footer and he recently bought our largest yacht – the 155. We’re good friends.”

It was Eddie who said: “People don’t need yachts, they want yachts.”

With the Chinese corruption scandal still in full swing, who is buying Sunseekers?
“Well, the Chinese market has died somewhat due to the Government intervention,” says Robert. “All luxury brands have suffered in China. But they’ll be back one day for sure. Our boats are selling very well in America – especially the larger boats – and across the world.”

At this point the engines start and we negotiate our way from the quayside out into Poole Harbour. Robert stops talking. He’s listening, wide-eyed to the throaty roar of the engines bursting into life.

Does he still get excited at the sound?
“Oh yes I do.. this is my life,” he says.

So what are the qualities of an effective CEO?
“To understand people. If you don’t have the people at the heart you won’t get anywhere. And of course you must keep your eye on cash flow,” he tells me. I wanted to create something that was uniquely British that had amazing quality.”

His candour is refreshing.

“People either connect with you or they don’t. I think my openness has helped me sell boats over the years. You have to be honest.”

I ask him about his cameo role in the Bond movie Quantum Of Solace where he drives Daniel Craig in one of Sunseeker’s first open-cockpit speedboats, the Sovereign 17.

“He wasn’t very talkative at first since he thought I was just some corporate CEO,” Robert laughs. “I told him who I was in the end!”

The trend seems to be for larger yachts. Is this the future for Sunseeker?
“Probably more of a midway yacht – like the new 42-metre which uses the same mould as the 155,” says Robert. “And we’ve just launched the 116.”

Sunseeker is a company that gives back, supporting numerous local and national charities. After surgery at Poole Hospital, Robert gave the unit a £3.5 million surgical robot.

“They looked after me very well and you should always pay back what you’ve been given,” says Robert. “The people of Poole have been the success of our business, so it was important to give them that robot.”

Does he ever stop and congratulate himself on what he’s achieved?
“No, I don’t think you should ever do that,” he smiles, embarrassed.

Such a humble man. I love the way he’s brought people into his vision and shared his wealth with them, inspiring great loyalty. His former PA was with him for 50 years. We move up to the top deck where I chat with Nigel who is clearly as excited as I am to meet Robert, the creator of such an iconic British brand.

“Would you like to take the wheel?” Nigel beckons me to the captain’s chair and suddenly I’ve taken the helm of this 50-tonne, 3,200hp Yacht 75. Old Harry Rocks on my right, and a large tanker on my left. Buoys to the left and right of me. We are sailing through a channel and out into the sea.

“Take her up to 12 knots…” Yikes! Moving the throttles together gently is no mean feat. The power on these engines is incredible. I feel and hear her roar and then we’re off. My friend Alex behind me grabs on to the rail… this is a steep curved turn and one of the most exciting experiences of my life.

I feel so alive! The power is amazing – and at speed they feel so stable. The sheer joy of being this high above the water, yet fully engaged with everything around me – other vessels, the scenery, the sky, the wind the water – is a very life-affirming experience.

Sunseeker – Where and how