Since 1791, Girard-Perregaux has been reinventing the long tradition of Swiss watchmaking. In its 220 years, the Swiss Manufacture has registered more than 80 patents in the field of watchmaking and has brought legendary creations to life. Today, the Brand is one of the very few to bring together all of the skills and expertise required to produce Haute Horlogerie watches under one roof. To celebrate its 220th anniversary, the Swiss Haute Horlogerie manufacture Girard-Perregaux is setting up a worldwide travelling exhibition of exceptional timepieces from its museum collection and of 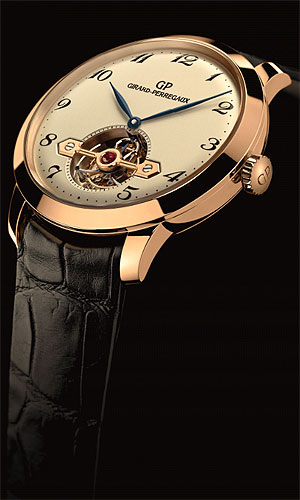 rare contemporary watches. It will be the most important set of Girard-Perregaux timepieces ever showcased outside Switzerland.

Conceived as a learning voyage into the spirit and values of the Swiss Haute Horlogerie Manufacture, this exhibition – “A tale of inspiration – Unveiling 220 years of watchmaking Art” – will take the visitor through two centuries of evolution in the art of measuring time while establishing an interesting link with major events, public figures or works of art which have marked world history.

Among the rare timepieces, documents and watchmaking tools presented, one of the highlights of the exhibition will surely be the “Esmeralda”. This masterpiece by Constant Girard-Perregaux is the most famous edition of the Tourbillon with three gold Bridges and was awarded a gold medal at the Universal Exhibition in Paris in 1889.

The public will also meet with some of the Manufacture’s master watchmakers and craftsmen presenting their art and know-how.

This travelling exhibition will stop in:
Shanghai – Sinan Mansions – from 20th to 23rd October 2011
New York – Boutique Girard-Perregaux on Madison – from 18th to 26th November 2011

Other exceptional timepieces from the Girard-Perregaux Museum and of the contemporary collections will be presented this autumn:

In a dedicated space of the Printemps Haussmann in Paris, from 25th August to 8th  October 2011

La Esmeralda, watchmaking masterpiece
Several reports of the Paris Universal Exhibition of 1889 referred to the outstanding display cases of Girard-Perregaux particularly mentioning an extraordinarily beautiful, high-precision chronometer that impressed all who saw it. Its movement was a technical masterpiece with an original structure, and the sumptuous decoration of its case was an exceptional demonstration of engraving that involved most of the techniques of the art.

This pocket-watch with its fascinating tourbillon movement was later named “La Esmeralda”. Over the months before the International Exhibition, it had achieved some remarkable test results at the Neuchâtel Observatory in Switzerland, attested by the institution’s issue of its rating certificate. Then, at the exhibition, it was awarded a gold medal by the jury who recognised the perfection, both technical and aesthetic, of this extraordinary timepiece.

The watch bears the name of the luxury Mexican boutique of the agents Hauser and Zivy, to whom it was entrusted for a while. Then “La Esmeralda” is thought to have passed into the ownership of the President of Mexico, Porfirio Diaz (1830-1915) who led the country from 1876 to 1911. Finally, at the end of the 1960s, the pocket-chronometer was acquired from the President’s great grandson and it now crowns the collections of the Girard-Perregaux Museum.