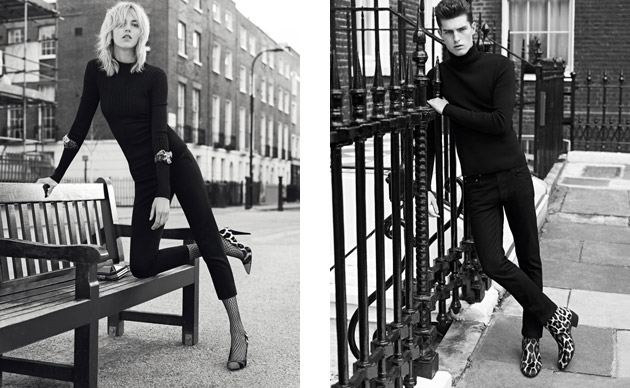 The Giuseppe Zanotti Fall Winter 2013/2014 Collection takes its inspiration from the heady world of Rock.

Hurtling back to the future, it conjures a variegated mood, a suspended moment in time, rich in contrast. The era straddling David Bowie and The Sex Pistols. A no man’s land, separating the theatricality of glam rock and the uncouthness of the punk generation. Deliberately edgy and proudly anti-establishment.

Experimentation. A balancing act, juggling proper and not-so-proper, male and female, high and low. Rouched booties are made in “sprayed” leather for a Camden Town look. Directly from Portobello Market instead, red ankle boots are a revisited and refined classic. Alternatively, the bold version shows off gold buckles. Inspired by the past yet totally new, the ankle boots with inside wedge, rear zip and round heel with a gold metal plate: the elongated toe puts proportions back on the agenda. Right? Wrong? No one can say but its sass for sure.

The main themes return like a guitar riff: lightness, a second skin that doesn’t get in the way; attention to detail: the whitest background, like a leopard’s underbelly, and darker shades combine in leopard-print pumps. Precious craftsmanship: from the tactile 3D thong sandals, reminiscent of the scales of a snake, to the tiger-effect of rhinestone appliqués, every stone applied by hand, played down on soft loafers and Seventies high boots.

Daring, sexy-chic jewelled body belts are back, worn over or under outfits. And one leather piece blends tradition and modernity: the old-world zipped cape encapsulates a quick-change artist mood. The warthog’s tooth bites women too, apparently, as the biker half-boots and some loafers are for him and for her: the new unisex.

Bags too are light. Like the black, white or red hobo bag. In super-soft, almost impalpable leather, so fine it could fit in the palm of your hand. The jewelled version has a python-effect rhinestone handle.

An even more precious compilation. Zanotti beyond Zanotti. But until it reaches the stores, it is a job only half done. Therein lies the wonder: it is women, with their personality and style, who will bring it to life, demanding continuous changes of scenery.