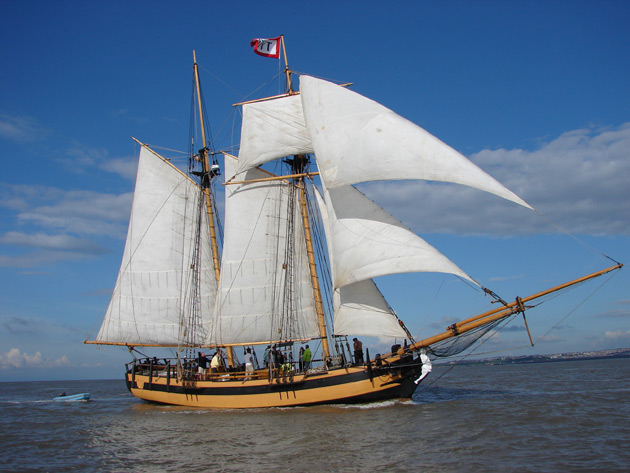 From mid-September, the glamorous superyachts at Gibraltar’s Ocean Village will have some competition on their hands in the shape of HMS Pickle. The 73ft twin-masted tall ship, an exact replica of the 1799-built original, will become a permanent fixture and tourist attraction for the marina.

Brian Stevendale, Commercial Director for Ocean Village, is thrilled his months-long search for a suitable ship has such a happy ending, “HMS Pickle is a real coup for us as she is famed for her role at the Battle of Trafalgar where she raced home to give the King in London the bittersweet news of Lord Nelson’s death and British victory over the combined Spanish and French fleet. In fact, en route to Gibraltar, she will visit Cape Trafalgar in neighbouring Cadiz province to remember the Admiral and all those seamen who lost their lives in the 1805 Battle – a fitting tribute.” 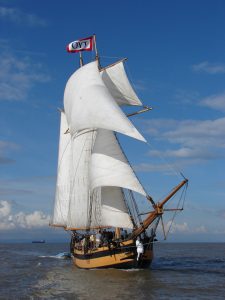 Brian continues, “Once at Ocean Village, HMS Pickle will be moored right next to our champagne and cocktail nightspot, Dusk, and be available for public viewing, organised parties and the occasional set-sail for corporate events and red letter days.  Touring tall ships is a fun and educational activity, allowing adults and children alike to appreciate the history and get a feel for what it was like to crew a great schooner such as HMS Pickle. We will be giving her the warm welcome she deserves in September – expect fireworks and celebration.”

HMS Pickles’ operator, Robin James, is going to Captain the schooner on the voyage from the UK to her new home in Gibraltar, a route that she would have made often, and is looking forward to the adventure. Robin says, “If ever there was a fitting location for Pickle, Gibraltar is the place. The connection she has with Gibraltar and the part they both played in British naval history is a great story to share and I am sure that her arrival will be a real boost to tourism and complement the other attractions the Rock has to offer. We have received fantastic support from the Government of Gibraltar and Ocean Village and can’t wait to get there now.”

No stranger to the sea, Robin’s father was a chief engineer and harbourmaster on the Isle of Anglesey, his grandfather a captain and his great grandfather owned a famous schooner – the Earl Lathom. He grew up spending summers on the ship with his family being regaled with sea stories. In 2004 Robin took time off work and set off around Europe and America in search of a tall ship of his own. Ironically he found HMS Pickle on the doorstep in Gloucester where she had recently arrived from Russia.

Robin finishes, “Pickle had real appeal for me because of her rich history and heroic adventures in the Caribbean and Europe.  The original ship was wrecked and sunk off the southern Spanish coastline in 1808 but this 1996-built replica is uncannily similar and gives us a great insight into the methods and technologies of the time.  In her short lifetime she was often in Gibraltar and it feels very right that HMS Pickle should return and bring joy to locals and tourists alike for the foreseeable future.”

To keep up to date with HMS Pickle’s arrival and all other activity at Ocean Village marina contact 00 350 200 400 48, email [email protected] or visit www.schoonerpickle.com