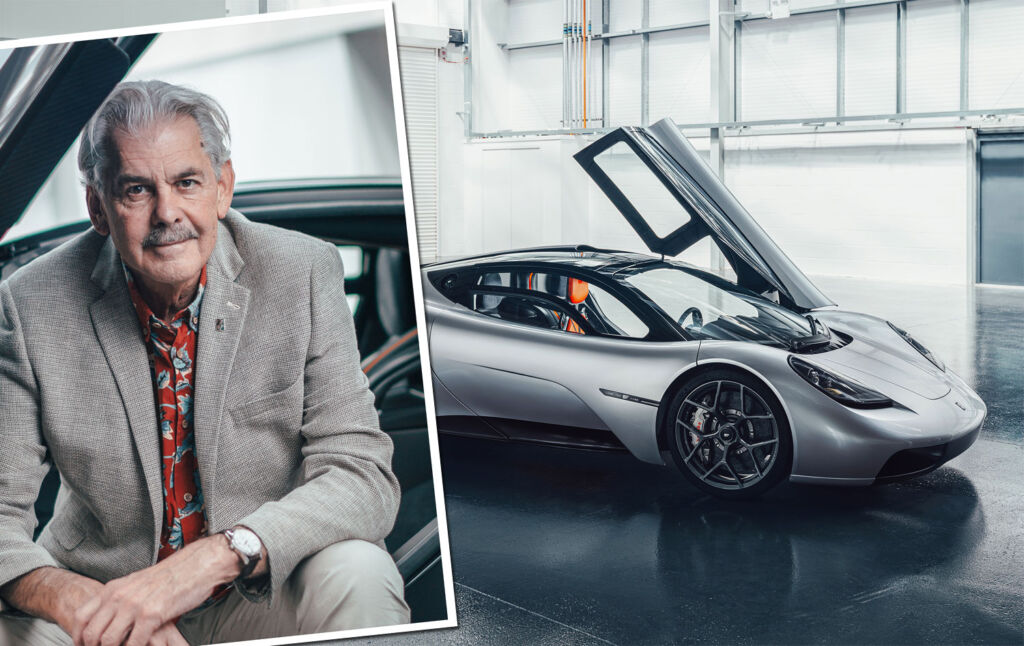 A Fighter jet for the road is what people are labelling the T.50 from Gordon Murray Automotive, after looking at it, it is difficult to disagree. The car doors lower over the driver and passengers enveloping them in a futuristic cockpit where they will have all their senses stimulated.

The T.50 from Gordon Murray Automotive marks the 50th design from Professor Murray, along with 50 years in automotive design. A remarkable achievement matched by the car he has created, along with his dedicated team.

As always with a Murray design, the driver is the focus, and the T.50 is the most driver-centric supercar ever made.

With an F1 car, the driver sits in the centre where they have a fantastic view. All the controls are ergonomically clustered around the steering wheel, so they become second nature for the driver to operate. They really are strapped in like a fighter pilot, so every movement makes the car perform; Leading to an incredible driving experience.

A significant difference between the T.50 and other marque’s supercars is that Gordon Murray Automotive is not looking to break records. 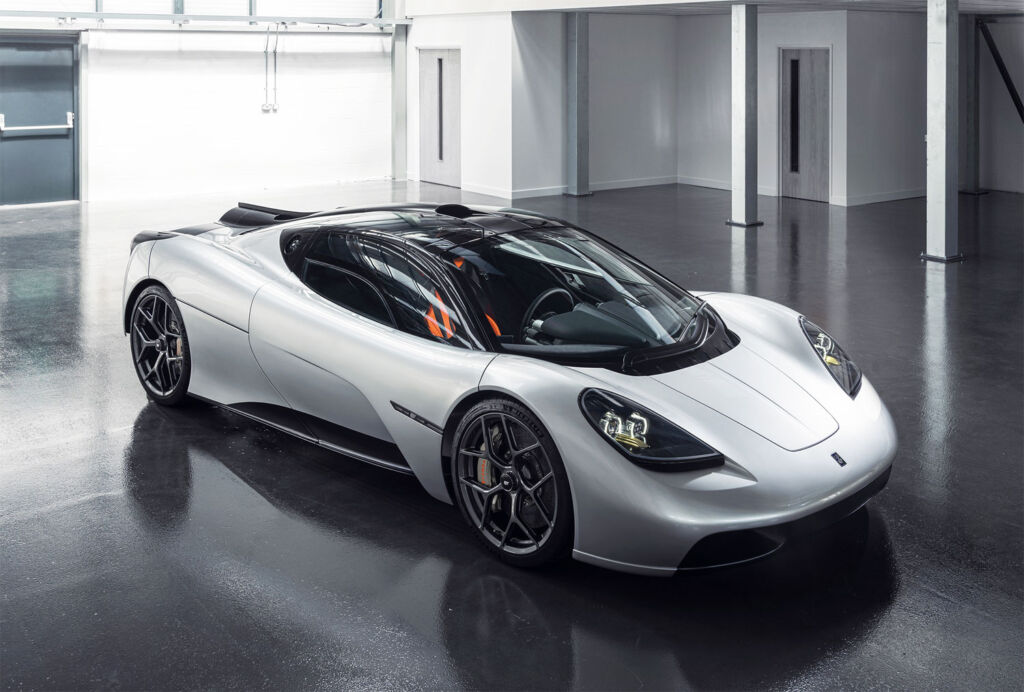 Top speed is not essential, and other performance targets sought by others are not primary objectives. Optimum performance comes from the engine so it will go fast, extremely fast. It will accelerate quickly, supremely quickly, but above all, it will be so rewarding all round for the driver.

Also, unlike other supercars, it can be used daily as a regular road car, yet it has the most effective and advanced aerodynamics of any road car. This is enabled by Murray’s unique rear-mounted fan. As mentioned, it can take three people in comfort and has functional luggage space, so a blast down to the south of France is possible. 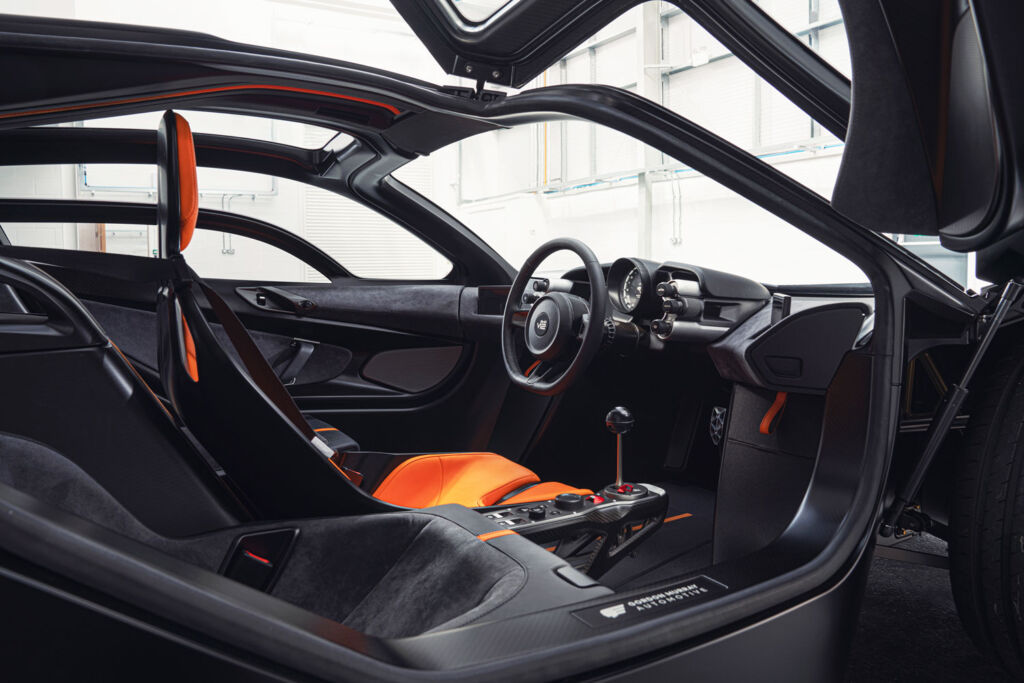 If you want a T.50 as a daily car, you will have to move quickly and have a large wallet. Only 100 will be produced from January 2022 at the Gordon Murray Automotive site in the UK. Priced at £2.36m before taxes you won’t be able to PCP this model.

The UK will be the significant provider for all major components, with the powertrain, body and chassis being made here. 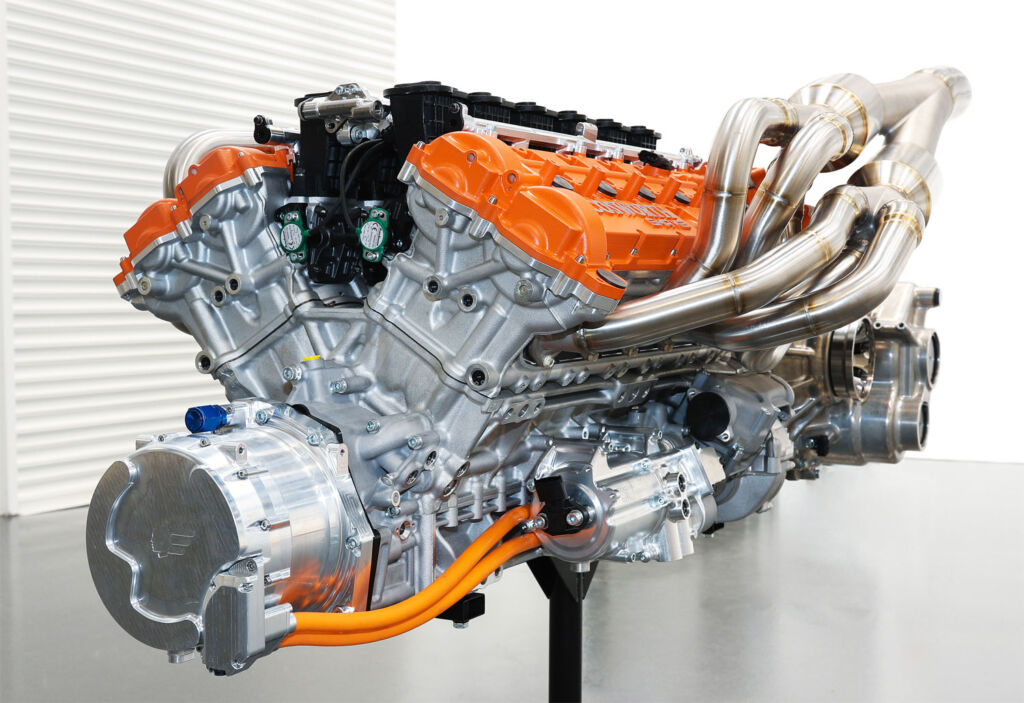 What powers the T.50 I hear you ask? Inside is a V12 3.9 litre naturally aspirated engine from Cosworth. Weighing under a 1000 Kg at 986Kg it’s light weight combined with the power means the T.50 is extremely rapid.

A beautifully designed pair of dihedral doors lift and move forward resting high above the cabin when the passengers want to exit the T.50. Creative use of quality materials with an utmost precision sum up Murray’s car. Gordon particularly wanted his suppliers to produce lightweight components, so the power generated from the V12 had less gross weight to push. 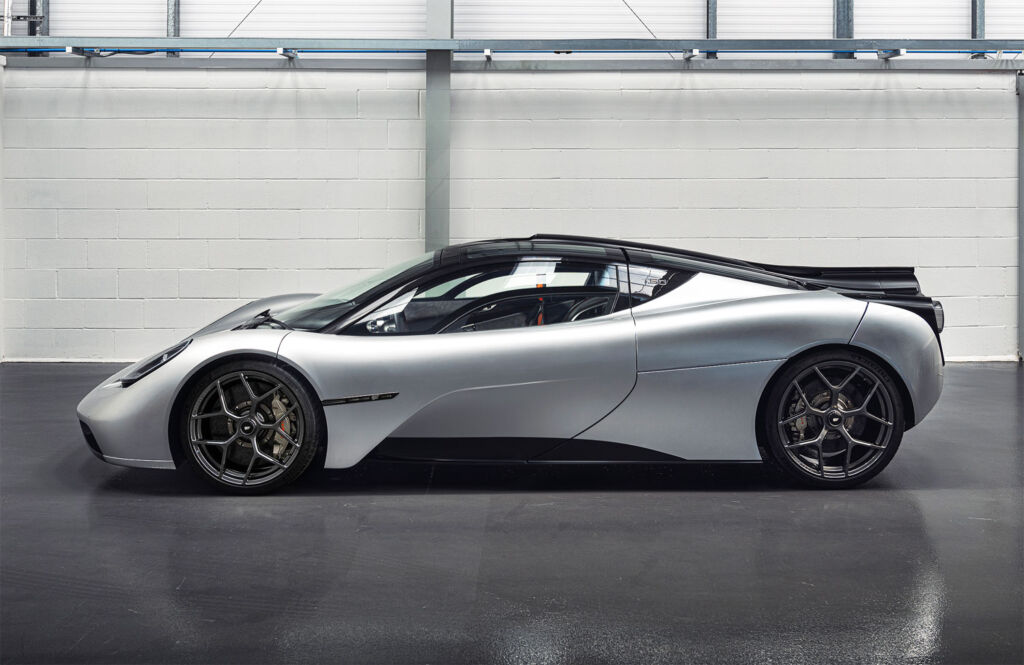 Gordon will meet every client buying a T.50 if they wish to. This will be their opportunity to refine their wishes for interior and exterior personalisation. The owner will be fitted for the steering wheel, pedals and seat.

The Cosworth GMA is bespoke, lying at the heart of the car, which Gordon believes makes up 50% of supercar driving experience. The V12 configuration has become the world’s highest revving, power-dense, fastest responding and lightest. Capable of 12,100rpm before it redlines the T.50 will pack a bunch.

A cold-air ram induction intake sits immediately above the driver’s head, and carefully crafted carbon fibre panels in the roof act as a loudspeaker, amplifying engine sound within the cabin. The system is actuated by throttle angle and not revs, meaning the T.50 is quiet and refined on part throttle, growing louder as the accelerator opens. 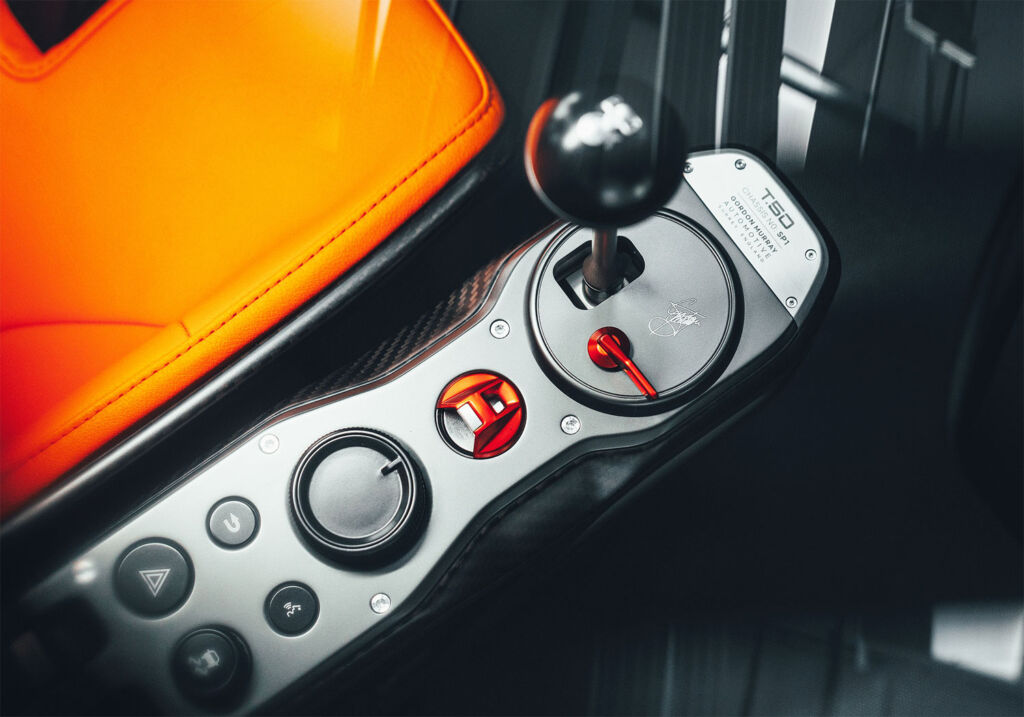 A manual gearbox is a requirement on a real drivers’ car, so Murray wanted to make sure his H-pattern six-speed box is the best. The configuration allows for short changes across the narrow gate, so smooth, reliable, satisfying shifts can be made.

The T.50’s kerb weight of 986kg makes it the lightest supercar of the modern era, lower than the average supercar weight by almost a third. Thanks to the focus on being lightweight, the car offers unparalleled levels of agility, responsiveness and driver focus.

The T.50 is a car that is created to be ‘alive’ at average road speeds, not only when the revs climb past 10,000rpm. It will entertain and engage on low-speed daily trips, as well as when driving on the open road just for the thrill of it. 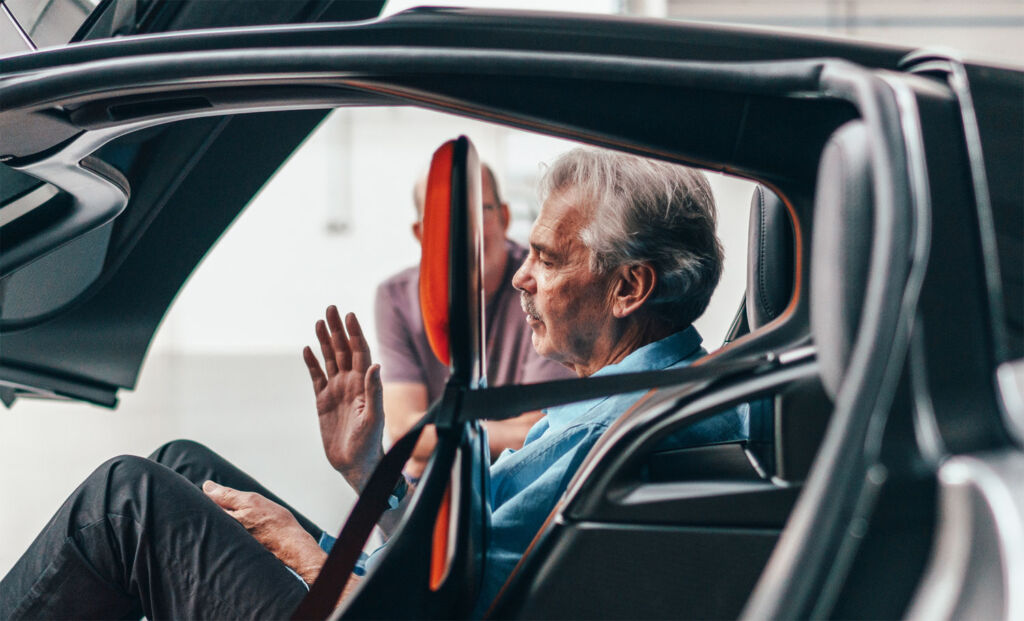 Driving aids are minimal, and ESP and Traction Control can be turned off, allowing the driver to get the full adrenaline rush of all the power going to the wheels. Performance can be influenced by six aero modes available using active and interactive fan-assisted aerodynamics.

At the rear of the T.50 is a 400mm mounted fan which enhances the performance of ground effect. It works with the rear spoilers and diffusers to increase downforce by 50% growing to 100% when braking. 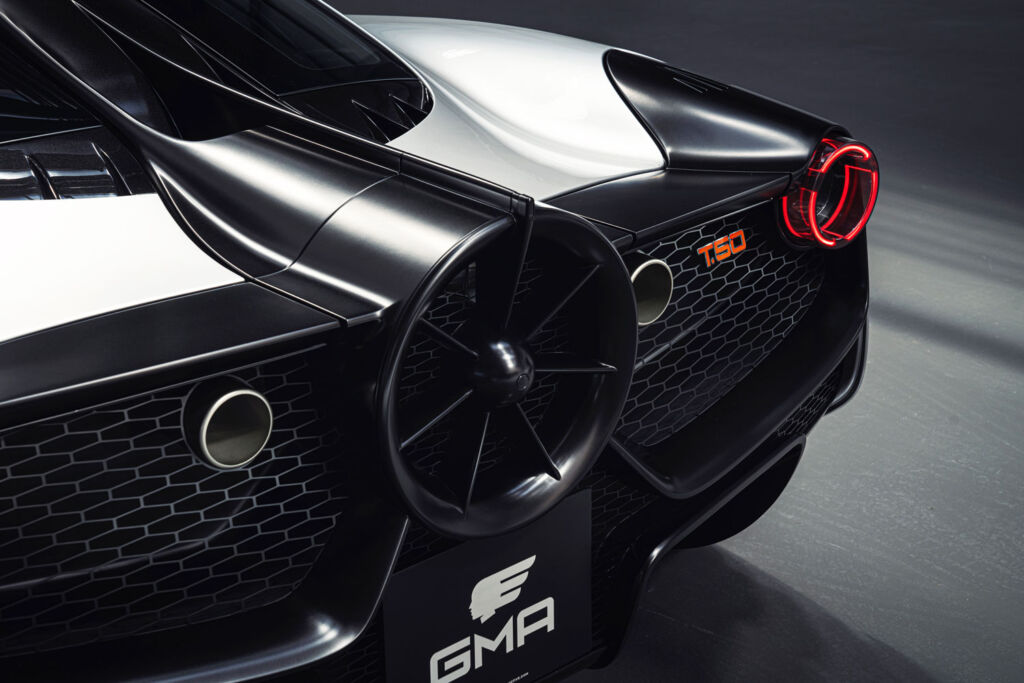 Gordon is so proud to display the Cosworth engine that it is on view when the twin gullwing openings that span the rear half of the car lift up.

If you have a passion for cars as we do at Luxurious Magazine, then you will be as excited about the T.50 as we are. I am so looking forward to seeing one in action, but the rarity may make this only possible on film.