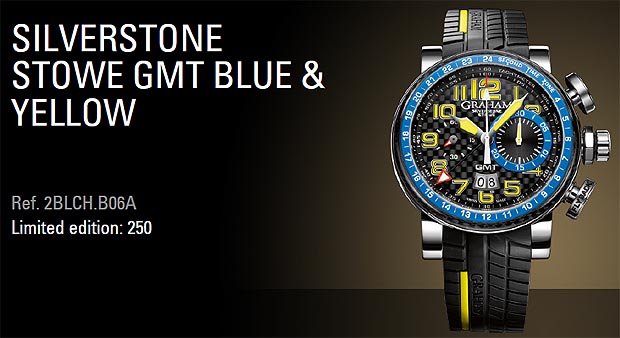 Graham-London, the watch company that can trace its origins back to Londoner George Graham (1673-1751), a man credited with many innovations in timekeeping including the Chronograph, the dead-beat cylinder escapement and the mercury pendulum to compensate for temperature differences. He also built the master clock for Greenwich Royal Observatory which defined time for most of the 18th century. 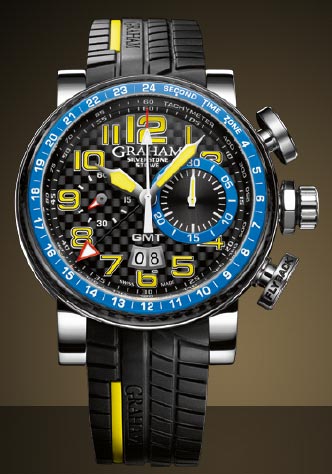 The company was resurrected back in 1995 and is today a privately owned Anglo-Swiss watch company which designs and builds its own watches in its La Chaux-de-Fonds production facilities in Switzerland. This wonderful heritage coupled with the Swiss production facilities have resulted in the creation of the limited edition Graham London Silverstone Stowe GMT Chronograph watch.

About the Silverstone Stowe GMT Chronograph watch
Bright lights, Screeching tyres and fuel vapour. The colourful GRAHAM high-powered Silverstone chronograph is still at full speed and ahead of the race. So far undefeated, the unstoppable Silverstone Stowe GMT Blue & Yellow is winning all the races it competes in. With improved mechanics and impeccable racing features, the chronograph’s performance is undeniable. This no-nonsense watch distinguishes itself by its sporty carbon fibre dial base, enhanced by dashing blue and yellow colours, and an impressive array of racing skills. In addition to showing the hours, minutes and seconds with “lemon-ized” hands, it sports 30-minute and 60-second chronograph counters, a tachymeter scale – useful for calculating speed over a given distance – a twin date aperture, as well as a GMT display indicated by an outer blue ring and a dedicated black bold hand with red pointer. Driven by the ultra-reliable GRAHAM bi-compax chronograph movement, with a 48-hour power reserve, this is a watch that can definitely take the heat and knows all about endurance.

Teamed with an integrated black tyre tread rubber strap, featuring an attractive yellow inset, that confirms its undeniable connection with the world of motor sports, the Silverstone Stowe GMT Blue & Yellow is definitely on the fast track to successful performances. Undoubtedly on path to finish on the podium.