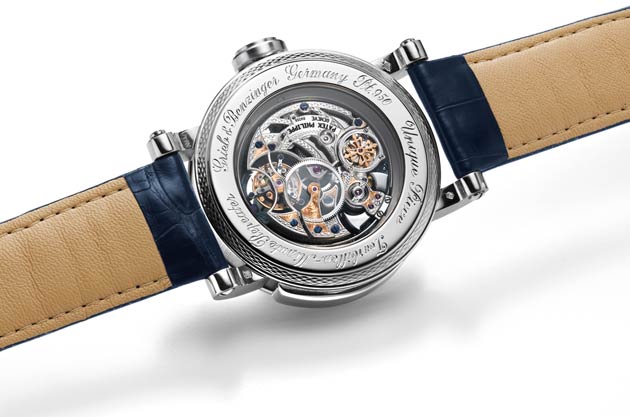 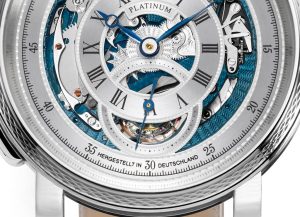 The rare Patek Philippe tourbillon movement found its way to Grieb & Benzinger thanks to a hardcore watch collector and a happy coincidence. It took more than fifteen months from first touching the Caliber RTO 27 PS for it to take on its final form – without knowing the kind of hype that this movement would create in 2011: this very same movement caused a sensation as it sold within a one-of-a-kind Patek Philippe Tourbillon Minute Repeater in stainless steel, donated to the Only Watch charity horological auction in Monaco 2011. The final winning bid upon the fall of the hammer was a stunning 1.4 million Euros.

This incredible auction result inspired the team at Grieb & Benzinger to create a breath taking new wristwatch. This new horological work took the artisans’ full attention since the fine guilloché on the plates and bridges necessitated moving original drillings by less than one-twentieth of a millimeter, and the movement needed to be carefully reassembled, adjusted, disassembled, and reassembled in order to guarantee full harmonious functioning of the great number of levers. This movement with 336 individual components not only included a tourbillon, but additionally a minute repeater mechanism – making it one of the most complicated movements in the world.

This movement was completely modified in the style characteristic of Grieb & Benzinger: fully skeletonized, guilloché and engraved by hand. Even gear wheels were embellished with guilloché and the 12 finely guilloché bridges and cocks coated with rhodium and rose gold. As if that were not enough, an additional mysterious wheel, visible on the back side, replaces the original gold drive wheel for the tourbillon. 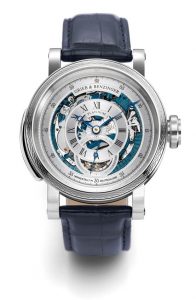 In hand-skeletonizing the base plate, the team journeyed to the edge of what is possible and are proud to have created the world’s first visible skeletonized tourbillon based on a Patek Philippe movement. After the skeletonization and guilloché, the base plate was coated with blue platinum, a signature element of every single unique Grieb & Benzinger piece that was developed by the firm.

The skeletonized Sterling silver dial in striking regulator style was embellished with a rare Breguet frosted finish created using the classic method, which is only presently practiced in this manner at Grieb & Benzinger.

These numerous details once again show that Grieb & Benzinger time pieces are more objets d’art than watches. The artisanal crafts carried out by hand here cannot be copied in an industrial way and are thus only to be achieved by the talents of the masters at work at Grieb & Benzinger, who work with these long-forgotten techniques every day.

With the Blue Whirlwind skeletonized tourbillon minute repeater, Grieb & Benzinger has created another breath taking collector’s item that proves its special position within the industry. Who other than these masters of their crafts in this special workshop would have the courage to modify such a movement?

The fact that all Grieb & Benzinger Platinum timepieces are one-of-a-kind – which will allow their value to increase over time – puts the price into perspective, for in comparison to the auction price paid for the steel version in the fall of 2011, this ultra-exclusive timepiece by Grieb & Benzinger could almost be called a bargain.