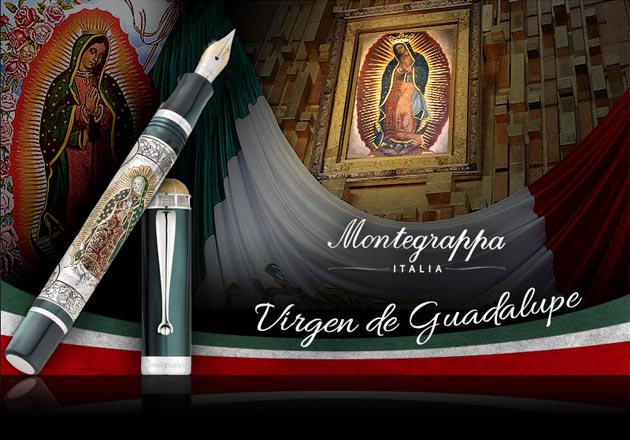 The gift of a Montegrappa Pen commemorates H.H. Pope Benedict XVI’s first visit to Mexico, while also celebrating the first 100 years of the Montegrappa brand. The Montegrappa Virgen de Guadalupe Pen is an exclusive Montegrappa creation, crafted this year to mark the 480th anniversary of the appearance of the patron saint of Mexico and Latin America, Our Lady of Guadalupe, on the hill known as Cerro del Tepeyac. 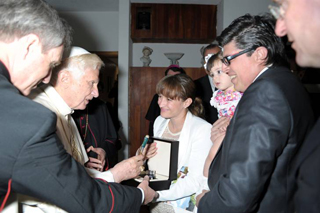 Upon conclusion of the Holy Mass conducted in Guanajuato’s Bicentennial Park, the prestigious brand had the honour of delivering the pen to H.H. Pope Benedict XVI as a sign of affection from the people of Mexico. The occasion represented a great honour for all devout Mexicans, knowing that His Holiness was presented with a work of art depicting the image of Our Lady of Guadalupe. The elegant writing implement was presented in a special mahogany and leather case, with a silver image of the Virgin of Guadalupe on its cover.

For Montegrappa, there is tremendous significance in knowing that the pen will become part of the Vatican’s artistic heritage, this is a limited edition pen especially produced for Mexico, said Montegrappa Mexico’s CEO, David Esquenazi, who was a strong advocate of the pen’s creation. This event will become part of Montegrappa’s history, which in 2012 celebrates 100 years of existence, he concluded.

Made out of sterling silver and a beautiful pearlised green resin, the Montegrappa Virgen de Guadalupe Pen feeds its supply of ink through a solid 18K gold nib. The top of the cap is a representation of the old Guadalupe Basilica, and is made from sterling silver, using a die-casting technique, with a cross that is made from gold through an electroplating process, protected by a clear lacquer coat finishing.

Skilled craftsmen hand-etched the designs applied to the pen’s body. The Virgin’s aura is attained with golden foil applications, made all the more vivid by the red and green ceramic accents on her mantle. The watermarked and etched designs making up the churches, the borders and the pen’s frame have been outlined with a carefully applied and unique type of ink.

Patrick Morlete Ruiz created the image that inspired the image on this pen during the eighteenth century, in an oil-on-copper sheet painting. The painting is owned by and featured as part of the Camila Rivero Lake Collection. The overall design of the drawing on the pen was the work of plastic artist, Arnaldo Coen. Presented in an elegant wooden box engraved with a commemorative bronze plating, the pen is supplied with an ink bottle topped by a metal cap, also engraved with the words, N.S. de Guadalupe, or Our Lady of Guadalupe.

For exactly 100 years, since 1912, Montegrappa has been manufacturing high-quality writing instruments in the same historic building in Bassano del Grappa, North East Italy.