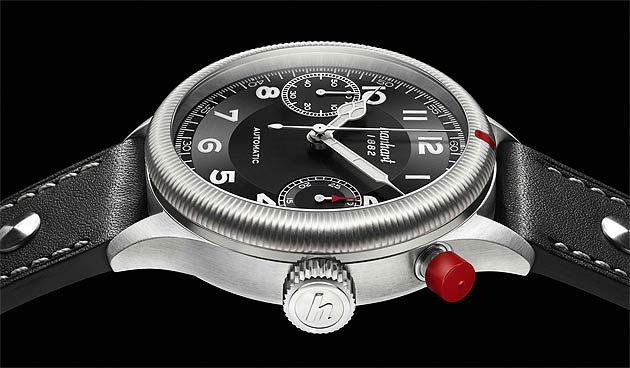 Just like its legendary predecessors produced by Hanhart, the Pioneer MonoScope watch features a single button for controlling the entire range of chronograph functions. 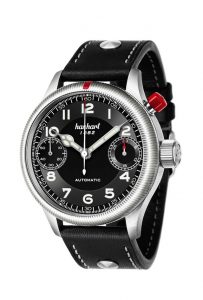 This new model from the Pioneer collection also bears another striking hallmark of the early precision timepieces made by the Swiss-German watch brand in the widely spaced arrangement of its small seconds and 30- minute counter displays.

In the first half of the 20th century, Hanhart was a key pioneer in developing highly-functional precision chronographs. As early as 1938, the Swiss-German watch brand designed a mono-pusher model for naval officers, featuring its own “Calibre 40” movement. All of the chronograph functions on this unconventional wristwatch – start, stop and reset – are performed by the same button and always follow strictly one after the other. Unlike its two-button equivalent, the seconds hand on this chronograph cannot be restarted after it is stopped. The next time the button is pressed, the seconds hand invariably jumps back to its initial position. This is the perfect technology for navigating safely and measuring distances at sea as it rules out any possibility of faulty navigation by dispensing with an addition stopping function.

Extraordinary technology and aesthetics The technical design with a single button is also the trademark feature of the Hanhart Pioneer MonoScope watch. The automatic movement enclosed in the generously-sized stainless steel case, which measures 45 millimetres in diameter, has had to be re-engineered slightly to suit this mono-pusher arrangement. The lever which sits directly beneath the point where the button at 4 o’clock would normally be has no function. A large shift lever is therefore responsible for the third strike on the chronograph cam. This cam has also been modified so that it has an additional tooth on its lowest level, enabling the shift lever to control not two, but three positions. 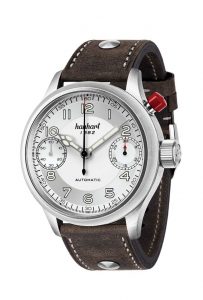 This is not, however, the only distinctive element of this new model in the Pioneer collection. A further modification of the calibre has made it possible for the two displays for the small seconds and the 30-minute counter, which are typical of Hanhart chronographs, to be positioned right on the edge of the dial. The aesthetic appearance of this model is therefore perfectly coordinated with the design of its predecessors from the 1930s, for which this arrangement was adopted in order to accommodate the large size – 15.5 lignes – of Hanhart’s early manufacture calibre. On the Pioneer MonoScope, the centres of the two displays, together with the numerals 2 and 4 as well as 8 and 10, form a straight, vertical axis, resulting in a symmetrically-balanced presentation. Flawless readability, in the characteristic style of a functional instrument watch, is ensured in any situation by the distinctive luminous Arabic numerals and the hands which are also coated with Super-LumiNova®. This is also enhanced by the minute hand, the end of which is bent downwards slightly to ensure a more precise time display. The black and silver colours used on this watch reflect the colours traditionally preferred for precision timepieces.

The typical Hanhart features In addition to the unmistakable bicompax display format, the new MonoScope – like the other models in the Pioneer collection – is distinguished by the typical characteristics of a Hanhart chronograph: the upper chronograph button, positioned at a greater distance from the lug for more ease of use, is especially striking and is a feature unique to this watch manufacturer. In order to achieve this arrangement, Hanhart integrates a specially designed lever into the case in its own workshops. This redirects the force from pressing the button located at 2 o’clock by the required number of millimetres. No less eye-catching is the striking red button, which has been a hallmark of Hanhart watches since 1939 and, right from the start, it has helped to deter wearers from inadvertently resetting the stopped time during navigation. The large, easy-to-handle crown with a deep bevelled edge guarantees safe and simple use. The bezel is available either in a thin design which can be rotated in either direction and which comes with a fluted, slip-proof finish and red marking or in an elegant and plain design with a flat surface. Elegantly contrasting satin-finished and polished surfaces give the case distinctive character. To guarantee maximum water-resistance and robustness, the Hanhart Pioneer MonoScope watch is, like the archetypal models on which it is based, fitted with a sealed, screwed-down case back which includes three indentations for the case key. The rivetted strap made from firm, hard-wearing calfskin and a high-quality pin buckle offer a secure fit on the wrist. The Pioneer MonoScope is also optionally available with a stainless steel bracelet and an adjustable folding clasp.