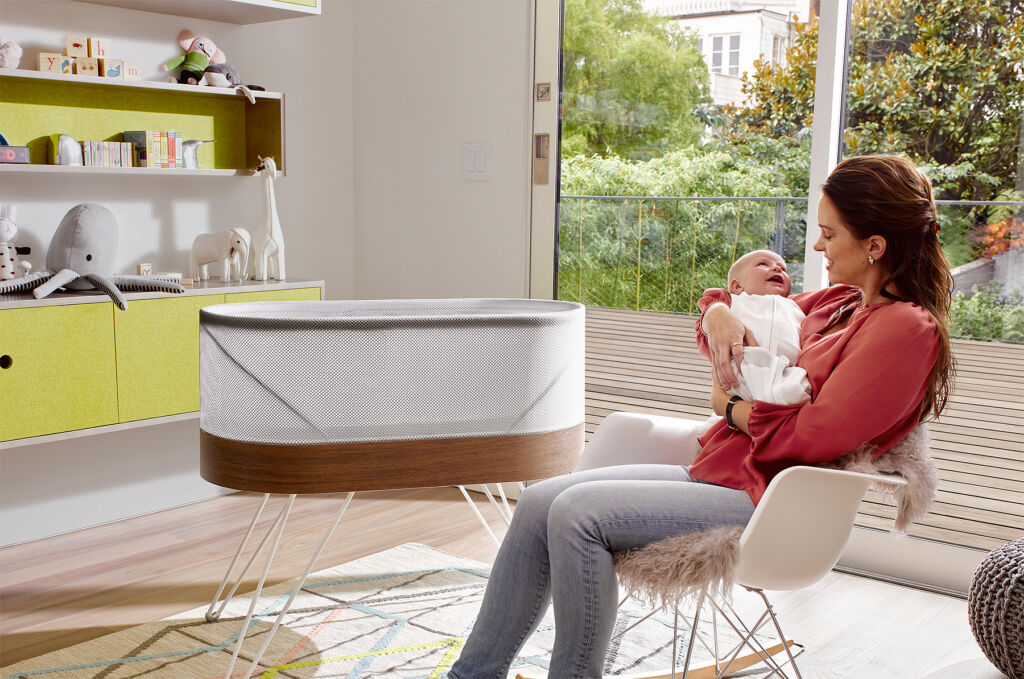 Simon Wittenberg reports back on the first weeks of living with the SNOO, the world’s most awarded baby bed from the US-based company, Happiest Baby.

When you’re about to become a parent, deciding what to buy for your new arrival can be a pretty daunting task because there are so many brands and products on the market, with most available at the click of a mouse. So, where do you start?

There are countless customer reviews on the web, you have numerous conversations at antenatal classes and chats with midwives, plus there’s the onslaught of numerous e-mails and apps that offer plenty of hints, tips and product suggestions leading up to the arrival of your child. However, it’s ultimately down to gut feel and intuition as to what to purchase, and what you think is ultimately best for your child – after all, there’s no formal “go-to” manual on parenting.

When a baby comes into the world, getting some well-earned rest when time allows is a top priority, and almost becomes a luxury. The effect of having constantly broken sleep, and naps here and there, can only be described as something resembling long-term jetlag. Therefore, any product or a piece of technology that helps you get a few more minutes of shut-eye is, of course, more than welcome. 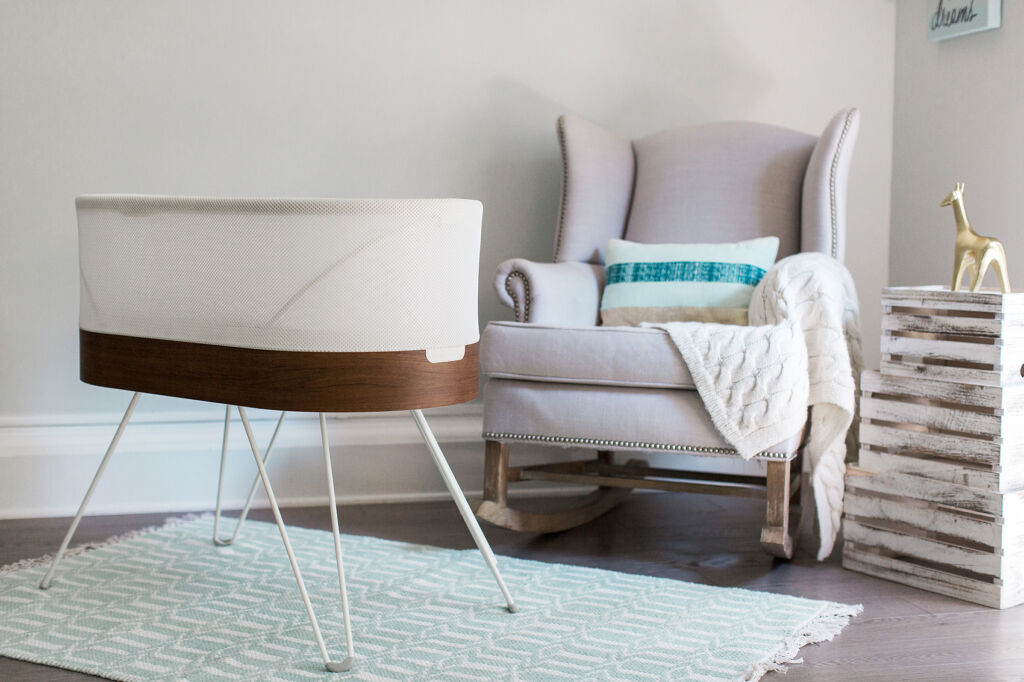 First of all, what is the SNOO?
Launched in 2016 with the financial backing of Jessica Biel and Justin Timberlake, amongst other millions of dollars worth of investment, and now a celebrity favourite, the multi-award-winning SNOO is the result of a collaboration between Dr. Harvey Karp (below), an American author and paediatrician, and Dr. Deb Roy (Director of MIT Media Lab’s Laboratory for Social Machines). 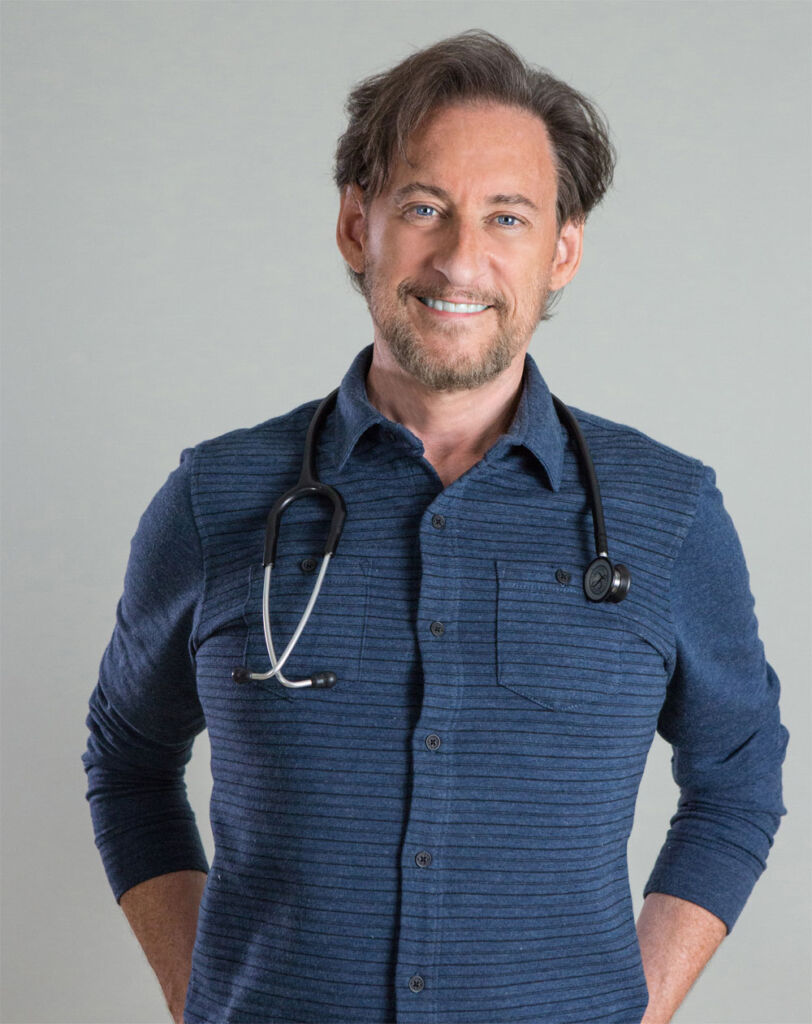 It is suitable for babies up to six months of age and is an elegant-looking breathable cream mesh and dark wood “smart” bassinette, which secures babies on their back when sleeping, the advice given to parents to help prevent Sudden Infant Death Syndrome (SIDS).

The SNOO retails for £1,145 in the UK (however, keep looking out for the regular promotional discounts on the Happiest Baby website), so in monetary terms, it’s a big investment for such a short space of time. Nevertheless, the return is calculated in terms of the hours of sleep you and your baby effectively get.

When speaking to some midwives about the SNOO as to what their thoughts were about it versus the more well-known competitors, there didn’t seem to be a great amount of knowledge about it, although they had heard of it and was aware that it originated from the USA.

Therefore, prior to trying the SNOO, getting a view from an impartial expert away from the Happiest Baby blurb was quite tricky (without asking the obvious question of recommendation, which midwives are not allowed to do).

Even on the Happiest Baby website, the reviews of the SNOO are mixed, so there was no clear consensus as to how good it would be before putting it to the test.

When the baby is in the SNOO, it is swaddled, meaning that the baby is strapped into one position (with a degree of movement, of course) so that you have the peace of mind that they won’t roll over in the middle of the night, and increase the risk of cot death.

How easy is the SNOO to set up?
The SNOO arrives in one big box, tipping the scales at just over 25 kgs, which is a little on the heavy side, so if it needs to go up a flight of stairs to a bedroom, it’s worth calling on another pair of hands to help move it. 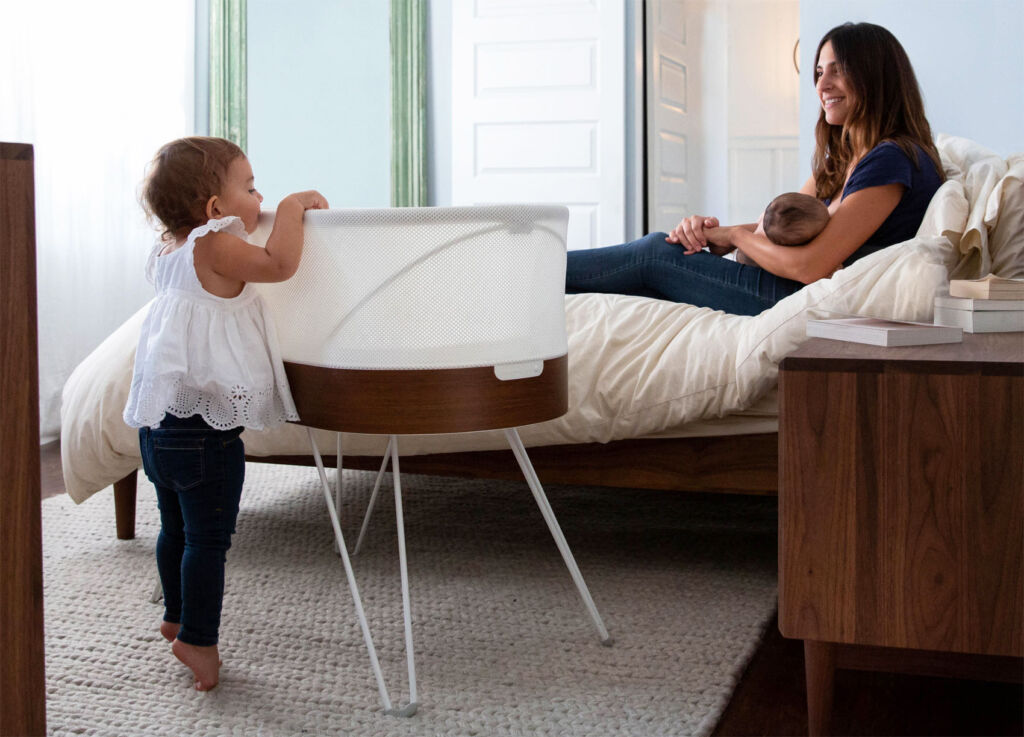 Once set up, the SNOO bed weighs in at around 17 kgs and measures just under one metre in length, and nearly half a metre wide at the mid-point. We found it easier to build the SNOO close to where it’s going to be stationed if there is space to do so. When complete, the SNOO sits around 80 cm off the floor, so in theory, it should be pretty much parallel to the top of your mattress, so it’s easy to check on the baby.

Manufactured in China, it’s a very cleverly packaged product (to protect expensive contents!). There are clear instructions on how to build it, plus there are handy videos on Happiest Baby’s YouTube channel if you get stuck at any point.

There’s not too much to do once all the contents are out of the box. With the SNOO flipped over, the metal legs (marked A and B) click into place easily, and the power cord is inserted within the central red circle. Two handy tips here are that it’s best to scan the barcode at this point in the SNOO app, and the rubber strip that attaches to one of the legs, should be put on the leg that is closest to the plug socket so that the wire is not left trailing with too much excess.

What does the SNOO come with?
It’s a fairly generous offering for the amount you pay, and when buying the bed, it comes with three SNOO Sacks in three different sizes (which are attached to the bed), a white 100% fitted cotton sheet, plus a mattress, which has a waterproof cover. There’s also a handy dust bag that wraps around the SNOO when the legs are off. 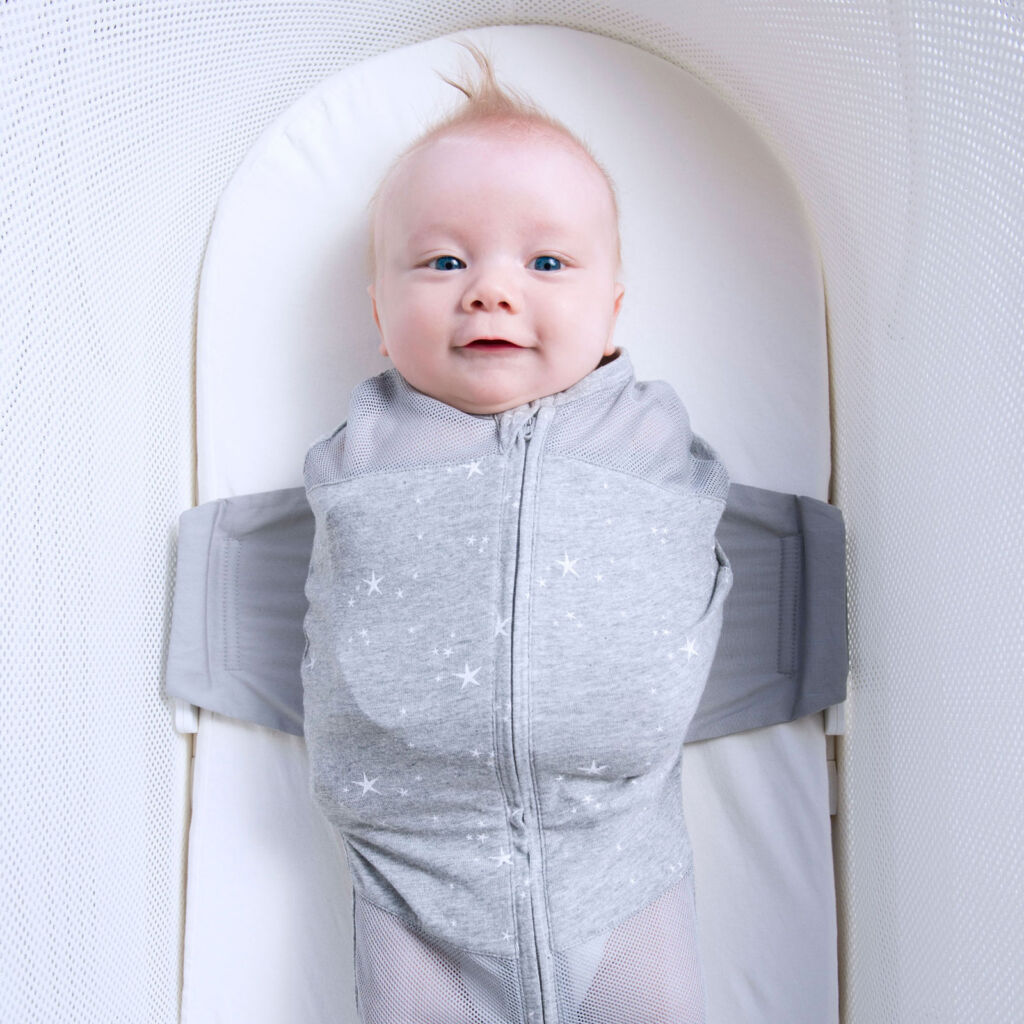 There are other accessories to buy on the website, which aren’t too expensive, as you will need a few fitted sheets (about £18 each), and a few more Sacks (about £35 each), as baby will outgrow the different sizes during the six months that it’s in the SNOO. There are also the Sleepea 5-Second Baby Swaddles (which look similar to the Sacks but without the sides to attach to the SNOO), which can’t be used with the SNOO itself, but can be used with a pram bassinette, for example. You can also buy a pair of leg lifters (extenders) for the bed to raise the head of the baby if they are suffering from reflux, mild colds or stuffy noses.

What does the SNOO app do?
The SNOO app, which is free to download for iPhone and Android smartphones, and is intuitive to use, is the control hub for the smart element of the SNOO. First of all, the app will tell you if you have engaged the sides of the Sleep Sack correctly so that it is nice and secure.

Once this has been confirmed, there is a large play button that allows you to activate the rocking motion and select one of three speeds, which is accompanied either by “white noise”, a sound similar to when you lost the aerial signal on an old TV, or a heartbeat-type sound to effectively mimic what the baby would have heard in the mother’s womb.

There is also a white button at the base on the outside of the SNOO to activate the subtle rocking, which is powered by a high-spec motor for tranquillity and reliability, although you can hear a slight high-pitched sound when the SNOO is not in motion. At the end of the night, the app will tell you how much time was spent at each level of rocking. When there was none at all, plus the greatest length of continuous sleep. You can then scroll through each day to compare and contrast how your baby is getting on.

As you are nearing the end of the six months, there is a weaning option on the app to transition easier to a traditional cot and not become too reliant on the rocking motion to get to sleep. This means that the movement is turned off when the SNOO senses that the baby is calm, limiting this feature to the more agitated moments. 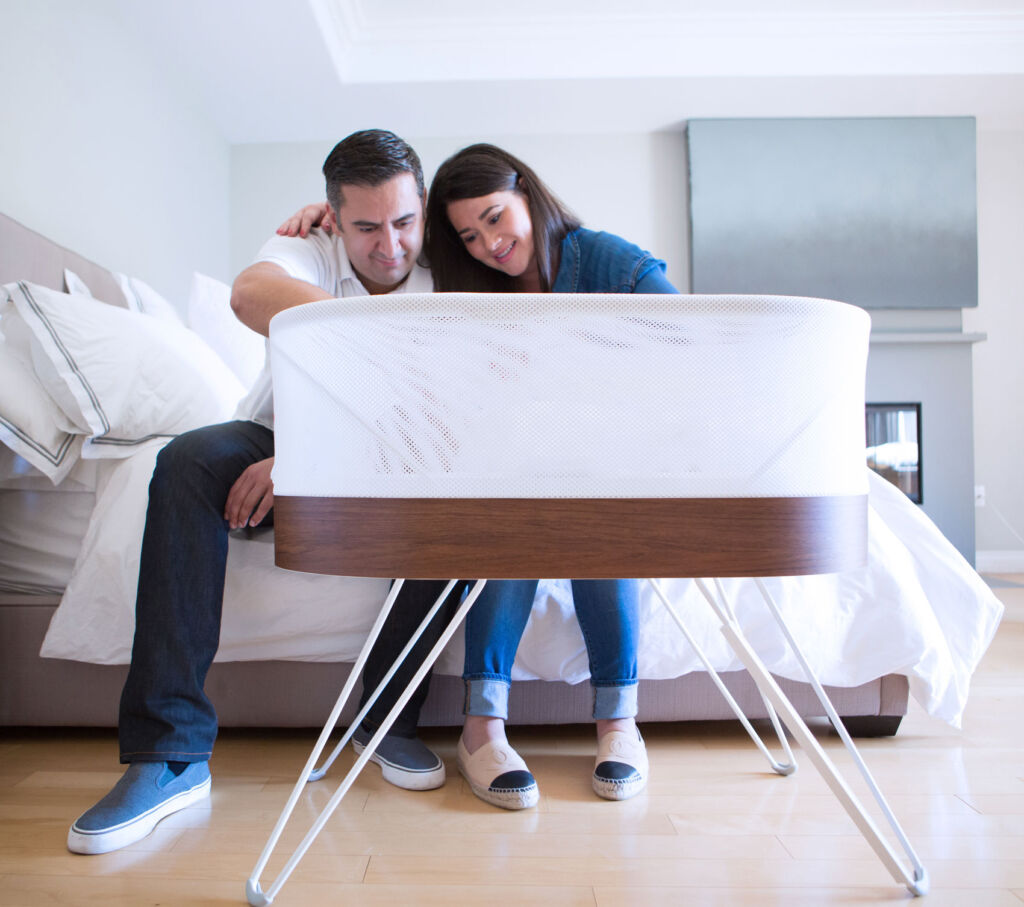 How did parents and baby get on with the SNOO?
The first night at home is always going to be a period of adjustment for everyone, but our baby instantly took to the SNOO once the rocking started, but unfortunately, this was for all of five minutes before the screams started. Persistence followed, and in the early hours of the morning, the calm option seemed to work, but the effectiveness of the SNOO was short-lived, and we resorted to putting baby back in a pram bassinette that it felt more comfortable with.

The other thing we found was that baby didn’t like being confined to a sleep sack and was much happier just being tucked in under a cellular blanket at the base of the bassinette. The only other concern was that, as reported in other reviews, the top level of rocking is pretty “intense”, and was quickly turned off to avoid any potential distress to the baby. However, it must be said that it is impressive how the SNOO senses when the baby is calm or screaming ferociously (which is part of the course for a newborn) to rock them at the right speed. 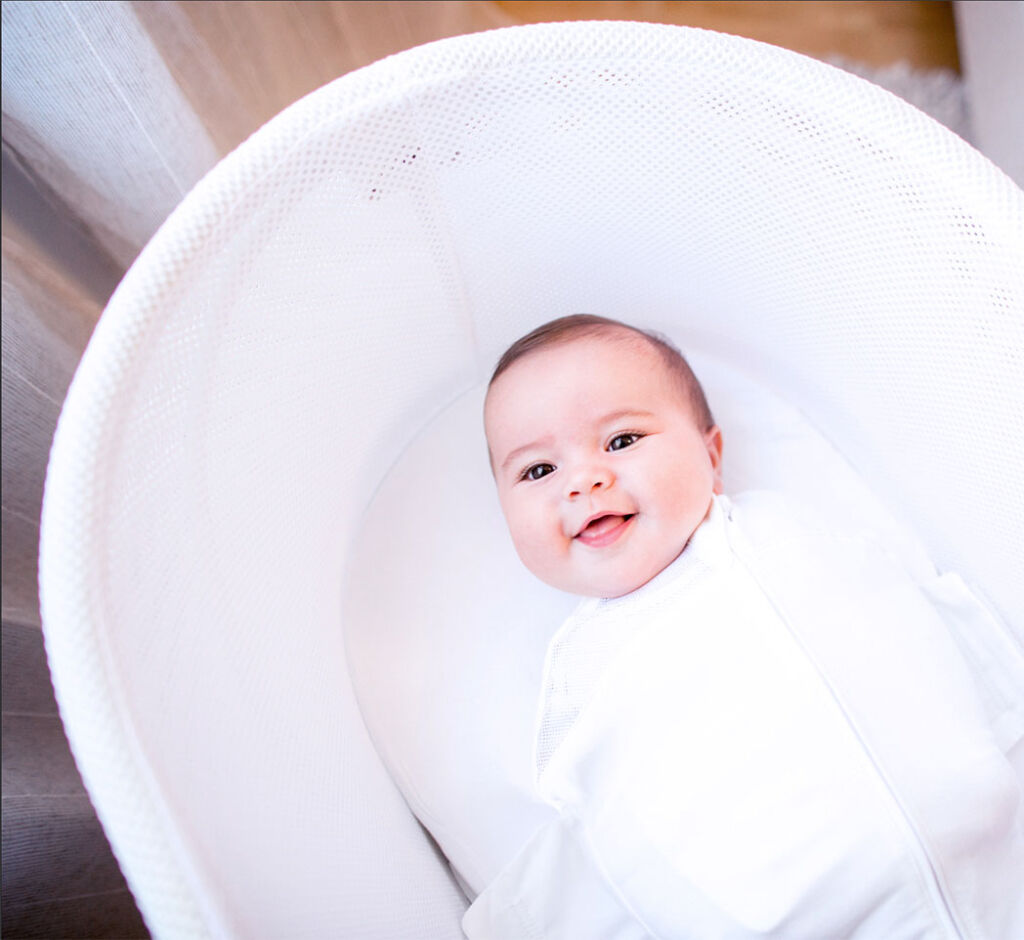 Our conclusion from the first month of use is that the SNOO is not deficient in any way in terms of its concept or level of comfort, but for a baby that is very small due to it being premature, the open space surrounding them was just too big to make the transition from both a cosy womb and a much smaller bassinette used during the daytime.

Our recommendation is that Happiest Baby possibly creates a specific model for premature babies so that they don’t find themselves swimming around in what they would see as such a vast “basket”. With that being said, we have not given up with the SNOO, and our plan is to have another go once the baby reaches the three or four-month point, and when this fabulous product is slightly less daunting for such a tiny person…

The Happiest Baby SNOO Smart Sleeper Baby Cot – Where and How?