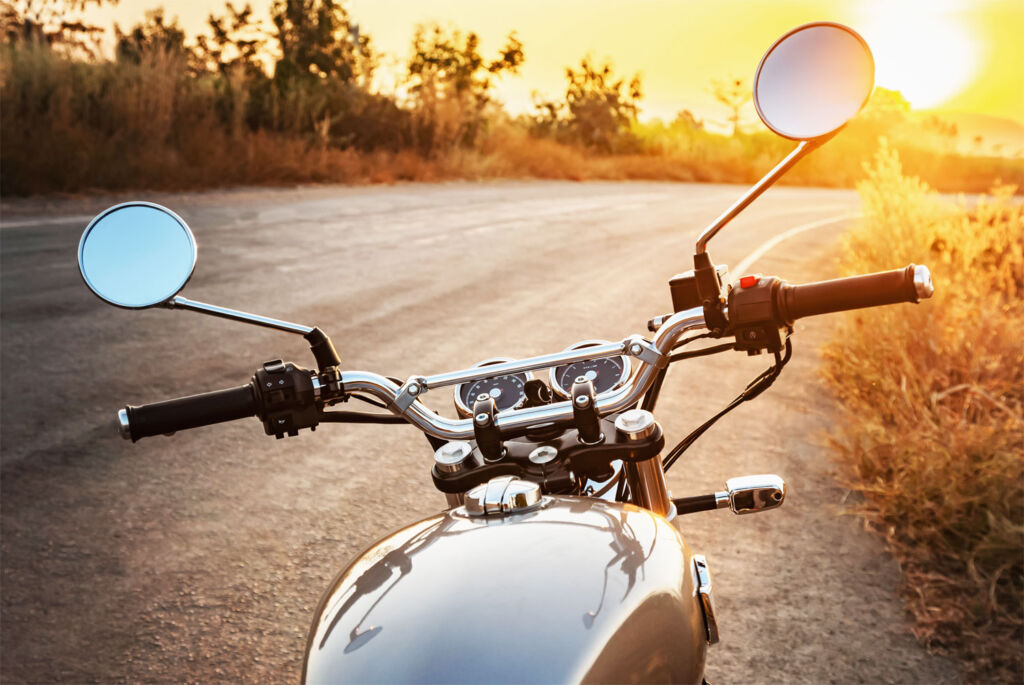 H&H Classics Triumph Motorcycle Auction offers an ideal opportunity to forget the world’s woes, explore the great outdoors, social-distance on two wheels and reexperience the happiness and thrills from times gone by.

At Luxurious we appreciate classic cars and motorcycles, so hearing of the next H&H Classics auction of Triumph classics got our attention. The bikes my Grandad rode in the 1950s and 60s were everyday runarounds but loved with passion as they meant so many things to their owners.

This affection is still seen today with prices of these old Triumph’s fetching more than modern motorcycles.

Over recent years, renowned businesses have created slogans such as, “the future’s great…”. However, let’s be honest, less and less people believe this.

For people of a certain generation, one of the best ways to turn a blind eye to this is to relive the past. An easy way of doing this is through classic cars and motorcycles. And the Triumph’s at the next H&H Classics auction offers British motorcycle enthusiasts the ideal opportunity to do this.

Who is H&H Classics?
Simon Hope established H&H Classics in 1993 as a specialist auction house dedicated solely to the sale of collectors’ motorcars and motorcycles. The company is still going strong with a passionate team of enthusiasts with hundreds of years of combined expertise. The auction house operates from its main office in Cheshire and a private sales garage near Hindhead, Surrey.

H&H Classics next auction is taking place on 22nd July and will be showcasing some fantastic classic Triumph’s. For years the legendary motorcycle brand had strong sales in the USA, and these same motorbikes are now coming back across the pond for British enthusiasts to enjoy.

With regards to this, Mark Bryan, Head of Sales for H&H Classics, said; “repatriating our national motorcycle heritage is important.”

I looked through the catalogue of Triumph’s on offer and highlighted a few of my personal favourites because they have a family connection. 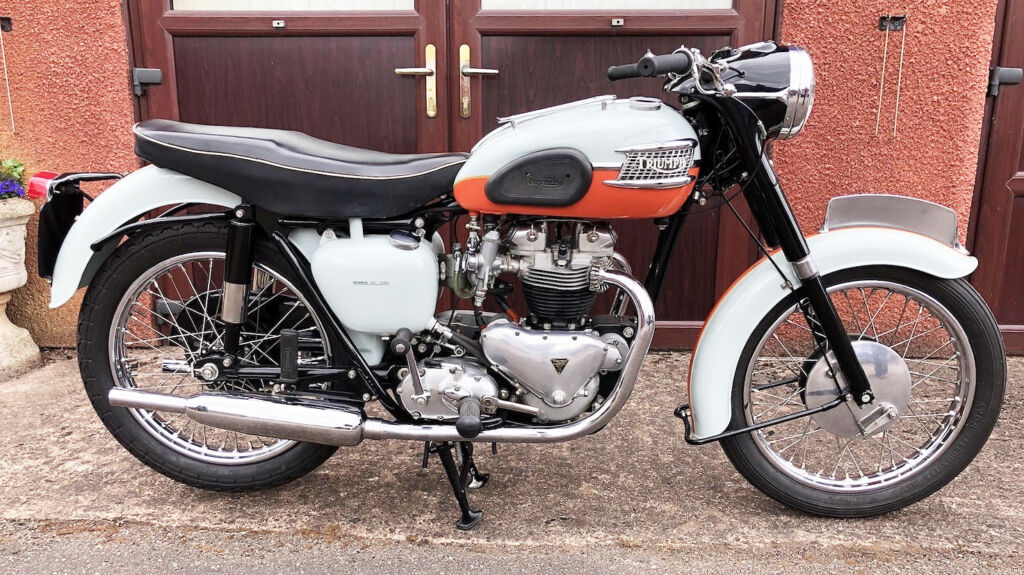 1959 Triumph T120R Bonneville – £15,000 to £16,000
The ’59 T120R Bonneville is known as the Tangerine Dream, with some motorcycle lovers claiming it is the most famous model of all time. It was named after the famous Bonneville Salt Flats in Utah where Johnny Allen rode a Triumph attempting the land speed record for two-wheeled machines in 1956

Huge demand in America for more powerful bikes lead to the production of the T120R Bonneville. A 650cc parallel-twin motor was able to take the bike to an honest 115 mph top speed.

1952 Triumph 6T Thunderbird – £10,000 TO £11,000
This is a model that motorcycle enthusiast and movie-icon Steve McQueen owned and loved. He purchased his while in England filming the Great Escape. In the 1950s Triumph lead the way with developing motorcycles and the Thunderbird was a spectacular bike. It received a 650 CC engine to develop the power bikers were asking for. 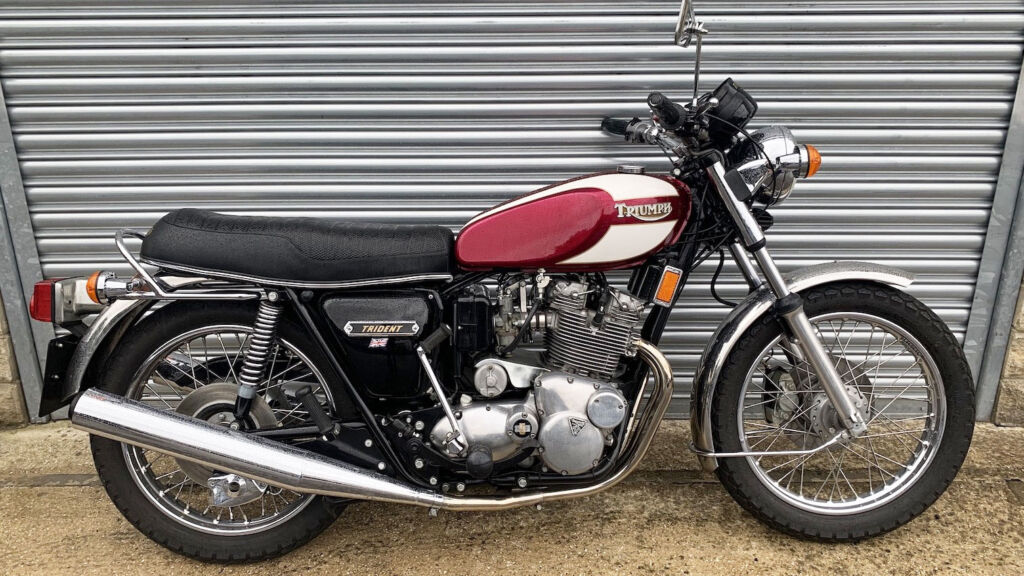 1975 Triumph T160 Trident £10,000 – £12,000
The T160 was the last of the Triumph triples as the company was already in financial trouble when they started building them. The Trident was built at the near-deceased BSA works at Small Heath in Birmingham rather than at Triumph’s Meriden works.

Launched in 1975, the T160 Trident was a massive change to the previous T150 version with over 200 alterations, and it took Triumph into the future of biking. Sadly too late to save the company. 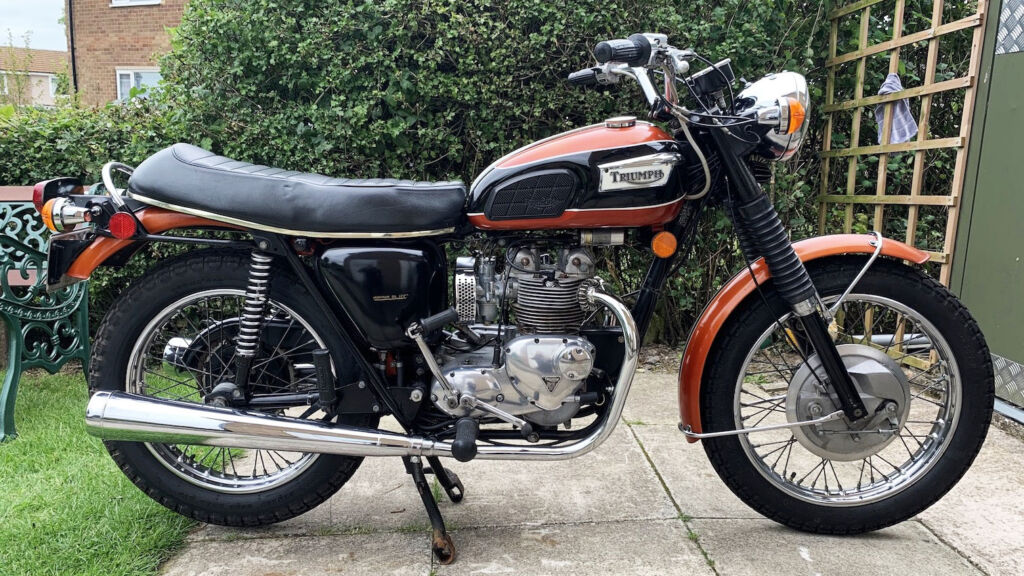 1971 Triumph T100R Daytona – £6,000 to £7,000
The 1970s marked the emergence of Japan as a major player in the production and export of motorcycles with the country’s eyes set on Britain as a valuable market. British bike manufacturers had to fight back against this, with Triumph improving their Daytona model to what became the T100R. The 500cc T100R was a bike to be ridden fast, the brochure describing it as ‘ A Versatile, snappy performer’.

The 1971 Daytona was the last Triumph developed in meaningful form due to the company closing in the mid-70s. This model has been described as the Triumph everyone should own.

Viewing is online now, and lots of interest has already been seen. I would love to get my hands on one or two. If you are in the market for a classic motorcycle, you should get your bid in quick. Happy Riding, I hope.