With the first meet on Newmarket’s famed Rowley Mile racecourse just seven weeks away, Newmarket is preparing for another busy year welcoming visitors and wants newcomers to the races to experience more than just the action at the winning post and get to know the town behind the track.

Newmarket doesn’t have cycle lanes. Instead, there are paths for horses that run parallel to the roads, and commuter traffic jams are usually caused by cars stopping to let horses cross en-masse on their way to the training grounds.

Char Collins, horse expert and Discover Newmarket guide, estimates that there are approximately 5,000 past, present and future racehorses stabled in and around Newmarket, while in the town’s working population of 10,000, it is thought that one in three jobs are connected to the racing industry.

That is two employees to every horse. Then again, these are no ordinary horses. 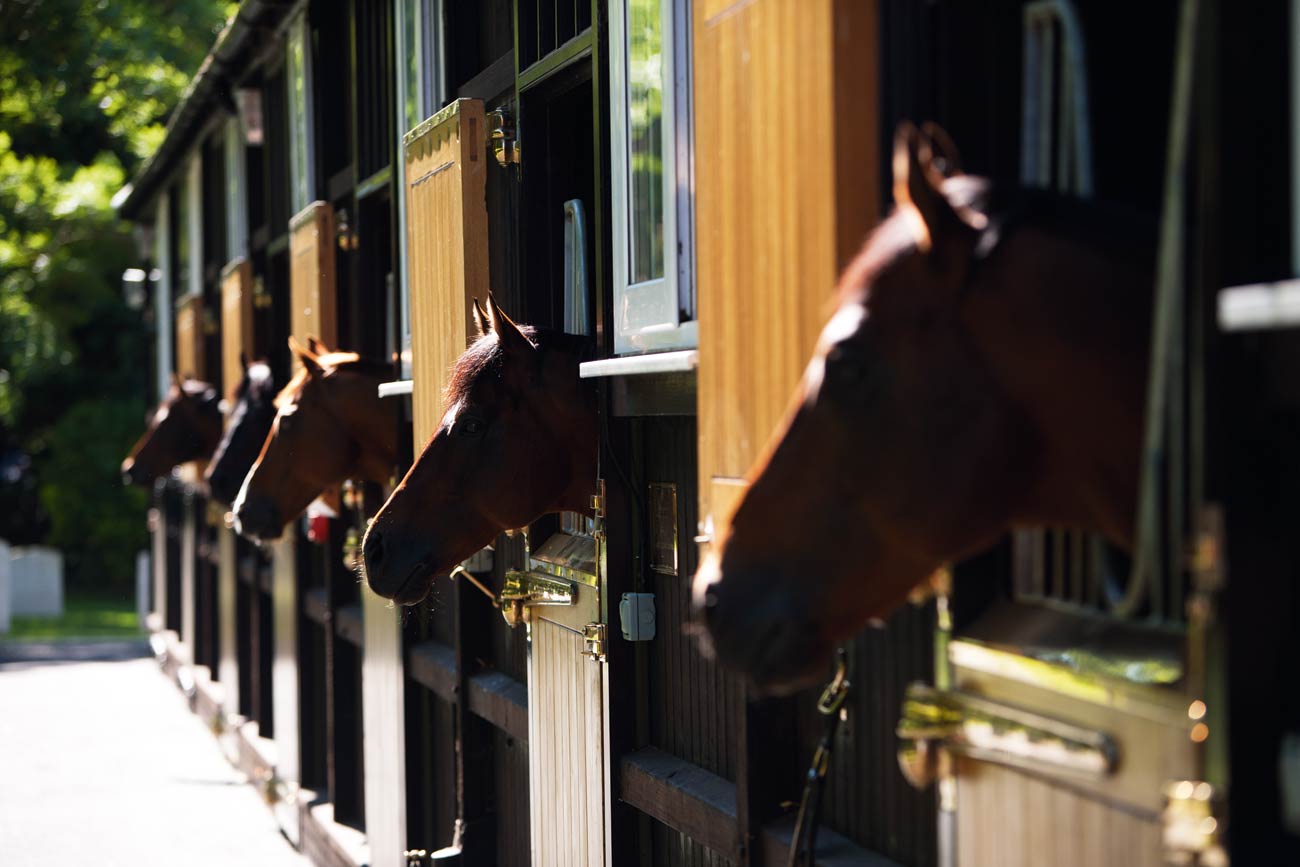 Behind the low-key charm of Newmarket’s High Street, a whole world opens up that revolves around the multimillion-pound equines and the industry in which they are the stars. Newmarket is a town that quite literally runs on horsepower, and as the flat racing season approaches, Discover Newmarket is ready and waiting to take visitors behind-the-scenes of the sometimes secretive, sometimes baffling, but always fascinating world of Global Horseracing HQ.

Although maybe not obvious at first glance, Newmarket breathes money, as one might expect of the town that gave rise to the multibillion-pound industry that is modern horseracing. Charles II insisted on the creation of an annual race, the Town Plate, which celebrated its 350th anniversary in 2016. A keen sportsman, Charles II even built a racing palace in the centre of the town, the last remaining part of which now houses the National Heritage Centre for Horseracing and Sporting Art.

The Jockey Club’s private and eclectic art collection, gifted by members over the 266 years of its existence, is priceless. Yards owned by Dubai’s Sheikh Mohammed bin Rashid Al Maktoum and Saudi Arabia’s Prince Khalid ibn Abdullah train some of the most valuable thoroughbreds currently racing. Juddmonte Farm owns the legendary Frankel; the Darley Stud – another Godolphin operation – owns the equally revered Dubawi, with whom owners will pay £250,000 to breed their mares. Tattersalls, the chief auctioneer of race horses in the UK where breeding stock, yearlings and foals are identified for future glory, regularly sees thoroughbreds change hands for seven figures. In 2017, a bidding contest between trainers representing Coolmore and Godolphin resulted in Coolmore paying £4.2 million for a yearling filly – the second highest price for a filly sold at public auction anywhere in the world. And this without a single race or any substantial training under her belt.

But go beyond the mind-boggling figures and big names, and you will find another Newmarket that is unique in its all-consuming passion for one of the longest-established and most popular industries in the world.

The famed Warren Hill on Newmarket’s ancient Heath offers the best view of early-morning Newmarket. Walk out at dawn and you will see horses riding out from some of the most famous training yards in the world – Charlie Appleby at Moulton Paddocks (a Godolphin yard), John Gosden of Clarehaven Stables, Sir Michael Stoute of Freemason Lodge.

The grassland has been carefully maintained over hundreds of years, and the resulting surface has led to Newmarket’s training grounds – with over 50 miles of turf gallops and 14 miles of artificial track – generally recognised as some of the finest in the world.

After watching the elegant and pounding gallops of the Godolphin horses, resplendent in blue outfits with the familiar Dubai logo visible at all times, it is time to meet Sir Michael Stoute.

It feels far away in the grey of late winter, but the sun peeking through the clouds and verdant green landscape serve as reminders that the flat racing season is just around the corner. And Sir Michael is only too aware of that, having watched his two-year-old Expert Eye cantering just that morning and offering tentative hopes for a challenge in the Qipco 2,000 Guineas on Saturday 5 May.

At Freemason Lodge, on this wet and windy February day, the two-year-old fillies and colts are being exercised in the inside track and it is a privilege to watch the stars of the future. Head Lass Emma points out the offspring of Champion horses and past Classic winners, including winners of the first two Classics of the season that run at Newmarket – the 2,000 Guineas and the 1,000 Guineas, run this year on the first May Bank Holiday weekend.

The horses are full of beans and giving many of the riders plenty to concentrate on – after a weekend, the first day of exercising is often known as “Fireworks Day” owing to the keenness of the youngsters to expend the energy restored after a rest.

The up-and-coming trainer Charlie Fellowes is passionate about getting more people into horseracing and – more importantly – introducing more people to the charms of Newmarket.

Horseracing, he says, is a sport that needs demystifying. Despite being the second highest attended sport in the country, it is viewed as being a closed and shady industry, particularly by the audiences Newmarket seeks to attract with events like Newmarket Nights, a summer concert series featuring artists including Paloma Faith and James Blunt.

“Anything we can do to make our sport more attractive and more open should be done, has to be done,” he says, and the opportunity to show off more than the racing is a big part of that.

Tucked behind the Rutland Hotel is the National Heritage Centre for Horseracing and Sporting Art, another tardis of Newmarket knowledge and history. The Centre includes the revamped National Horseracing Museum and the Packard Galleries of British Sporting Art, the latter of which sits within Palace House. Housing not only a fine collection of sporting art including collections by Sir Alfred Munnings and George Stubbs, Palace House contains a unique piece of architectural history – the preserved earliest vertical sash window, dating from the 17th century, a literal window into history from where Charles II no doubt observed his mistress Nell Gwynn, who had been installed in a cottage nearby.

Across the road, the Museum – redeveloped and reopened in late 2016 – also encompasses a base for the charity Retraining of Racehorses. This national welfare organisation takes retired racehorses and – as the name suggests – retrains them for a future in the wider horse riding leisure industry. Some might continue in competition and go on to become jump racers or eventing horses. Many will find homes as riding horses in stables and with private owners. They are all carefully schooled in a near-Olympic sized ring that is completely unexpected in the centre of the town. Yet again, there is so much more here than meets the eye.

Newmarket is undoubtedly the global home of racing – but what makes it unique is the opportunity to get a real insight into what happens behind-the-scenes. It is a town that challenges other heartlands of racing such as Ascot, Epsom and Cheltenham by giving newcomers to racing an unforgettable and illuminating insight into an utterly unique world – and the great race town has opened its doors to all.

Discover Newmarket tours are now open until October. Find out more and book at www.discovernewmarket.co.uk

The racing season begins at the Rowley Mile with the bet365 Craven Meeting from 17 to 19 April 2018. The QIPCO Guineas Festival takes place on the bank holiday Saturday 5 and Sunday 6 May. For more information and to book tickets, go to www.thejockeyclub.co.uk

With thanks to Discover Newmarket, Newmarket Racecourses, the Jockey Club, the National Heritage Centre for Horseracing and Sporting Art, Freemason Lodge, the National Stud, Darley Stud and Bedford Lodge Hotel and Spa.