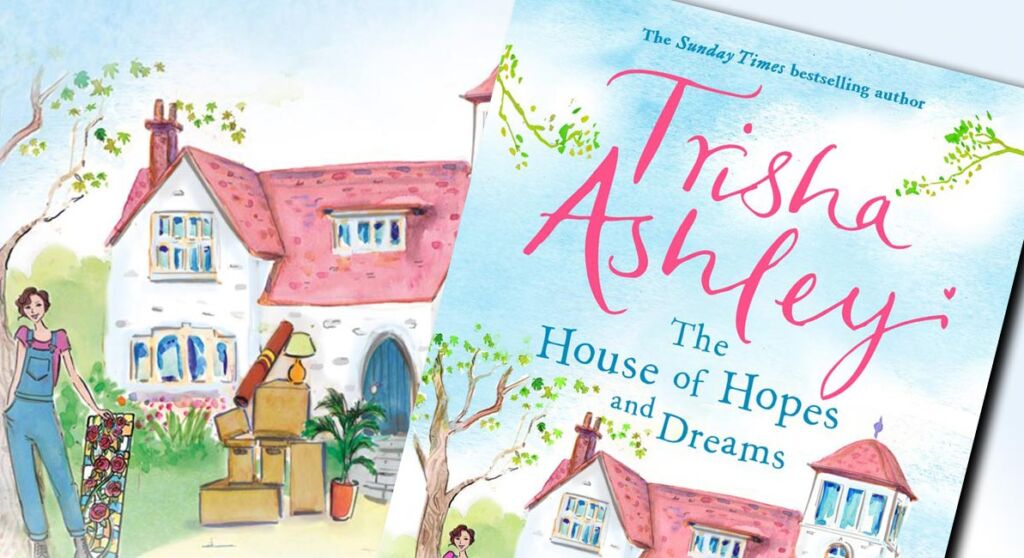 Natasha Godbold sets off on another exciting adventure into the beautiful world of Trisha Ashley visiting her House of Hopes and Dreams.

Romantic Comedy with a difference

What would you get if you combine dreamy romance, down-to-earth humour and enticing mystery? As proven in her best-selling books and witnessed by legions of fans, Trisha Ashley knows the answer. Adorned with beautiful descriptions, heart-warming characters and inimitable wit, this captivating fusion is Trisha’s signature style.

You can take an author out of Lancashire, but you can’t take Lancashire out of the author. Although Trisha now enjoys the tranquillity of North Wales, she was actually born in St. Helens, West Lancashire. This is how she came to inherit the famous northern dark sense of humour that makes her novels so distinctively vivid and hypnotic. She writes romantic comedy with an edge. And she is amazing at what she does. Time and time again, we take exhilarating trips to “Trishaworld” and come back asking for more.

The House of Hopes and Dreams

As a fan of the author for many years, I always look forward to her new novels. And I was thrilled to hear about her latest offering, The House of Hopes and Dreams.

The first thing that made me gasp with excitement was the composition of the book. It is similar to Trisha’s earlier novel I fell in love with “The Little Teashop of Lost and Found”. If you were lucky enough to read it, you’ll know what I mean.

The author creates this extra dimension to the storytelling by intertwining the passages of enigmatic past with current developments. This interlacing method really captivates one’s imagination and intensifies the suspense, making the story truly gripping.

In the new novel, the past takes the form of pages from a journal written by one of the occupants of an old mansion at the beginning of the twentieth century. And, the present is a life story of two vibrant and energetic young people: Carey Revell, who unexpectedly inherits the above mentioned ancestral county pile, in bad need of restoration, and his childhood friend – Angelique Arrowsmith. Together they take on this challenging project with centuries-old family secrets and puzzles just waiting to be solved. And, that is how the journey begins.

The description and development of the dilapidated mansion – a mouthwatering concoction of Arts and Crafts and an Elizabethan original wing – is fascinating. Add to that an out-of-this-world romance and a touch of an old thriller, and you end up with a book you simply can’t bring yourself to put down.

Trisha Ashley has a gift for creating strong, resilient and fascinating heroines in her novels. Consequently, Angel from The House of Hopes and Dreams follows the same mantra.

The heroine’s rather unusual name – Angel is shortened from Angélique, as the character herself explains in the book. It came from her mother’s love of the famous series of French historical adventure books by Anne and Serge Golon.

As you will see, the heroine of Trisha’s novel has got a lot in common with her seventeenth-century namesake. Both of these exceptional women are strong-willed, passionate and fearless. This helps them to deal with the toughest of trials and tribulations, life throws at them, without losing their true selves along the way.

Not only does Angel have an extraordinary personality, she is incredibly gifted as well. The heroine is a truly talented stained-glass artist. She is one of those people who lives and breathes her art. And that is how we – the readers – get our introduction into the mesmerizing world of glass making and artistry.

Reading the book leaves you with no doubt that the author is very passionate about the subject.

Having studied stained glass making as an art student in her formative years, Trisha Ashley herself knows all the inns-and-outs of the craft and is happy to share them. The way she describes the process of drawing sketches, turning them into cartoons and skillfully combining segments of coloured glass into extraordinary pieces of art is breathtaking. Trisha’s tantalizing descriptions awoke a torrent of curiosity in me. I felt compelled to do more research on the subject. Having learned the basics through watching a multitude of videos, I became completely enthralled with the art of glass making. It is fascinating! So, you never know, this book might inspire you to pick up a new hobby.

Alongside the romantic leads dashing Carey and talented Angel we are introduced to many other likeable salt-of-the-earth kinds of characters. Having grown up alongside them, Trisha Ashley has a flair for bringing these quirky personalities to life. In contrast to the superficial and unscrupulous London dwellers, so many of Carey and Angel’s Lancashire friends and neighbours are heart-achingly charming and endearing. You’ll almost wish you could move in somewhere in the neighbourhood, just to become a part of the community.

Top of the charts

The House of Hopes and Dreams is more than just another romantic comedy. It is another unmissable, inspirational, insightful, entertaining and spellbinding novel by Trisha Ashley.

As a result, it comes as no surprise that the novel has been topping the bestselling fiction books chart in the UK Sunday Times within days of its publication. Who knows, it might very well follow in the footsteps of one of the author’s previous books, “Every Woman for Herself”, which was voted one of the three best romantic novels of the last 50 years.

And I’m sure when you read “The House of Hopes and Dreams”; you would also want to nominate it for every award going. For, it’s simply brilliant.